Ever since I was a little girl, I dreamt of changing the world. However, as I learned more and more about how complex our world truly is, the task seemed increasingly unfeasible; too daunting, too unrealistic. But is it really? Perhaps we just need to redefine what it means to change the world. Everybody wants to bring about change on a grand scale; to invent something, to save lives, to become famous, but sometimes we forget how empowering it can be to take the simple steps of changing someone’s day, changing a moment. Because sometimes, a moment can mean the world to somebody.

The last day of my service in Cochabamba was heart wrenching, and it produced one of the most profound moments of my life. A college was visiting la Comunidad, and the students were instructed to take the children out, in their wheelchairs, to get some fresh air around the facility. I had just returned from eating a delicious almuerzo of stuffed potatoes with beef prepared by my host mother, and entered the main room of the orphanage to see if there were any more children who wanted to go outside. As I walked into the room, I saw a scene that had become familiar to me, something I had become almost desensitized to: children laying in the same positions on couches, day after day staring into space. I can still picture them, eyes transfixed at the ceiling or at a wall, each of them in set positions on the couch almost like abandoned dolls. Because today was a special day with visitors, many of the kids had already been taken outside in their wheelchairs, but there were six children who were still lying to the side without attention.

I walked over to a 10-year-old boy named Jose and tickled his chin until his face illuminated with laughter. Confused as to why no one had taken him outside, I turned and asked a  caretaker if I could bring him out with the other children. She calmly replied that he didn’t have a wheelchair, advising me that if I was really set on bringing him outside, I could carry him in my arms. She warned me that he was heavy, but that didn’t matter to me. In that moment, the gravity of the situation truly hit me. Because this boy doesn’t have a wheelchair, he literally never goes outside, even on special occasions. His life is confined to the walls of a singular building, lying either in his crib or resting on the far right side of the couch, trapped. 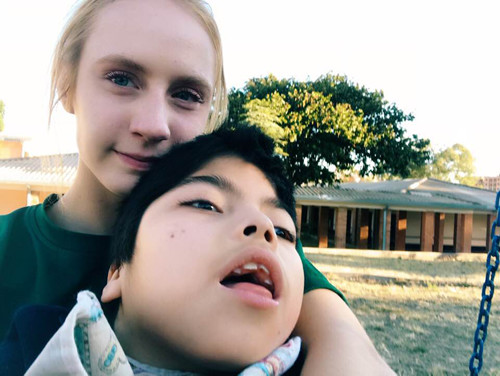 Stunned and heartbroken, I picked him up and started to carry him to the park. As soon as we stepped outside, I witnessed the most moving moment of my life; the boy looked up into the sky and his eyes beamed with wonder. We sat on the swing together for some time, and through a mess of tears, I pointed at different landmarks and explained them. “Mira,” I pointed towards the Andes Mountains, “ Esas son las montañas … Y arriba...” I pointed at the sun, “Ese es el sol. Tan bonita, ¿ verdad?” It broke my heart to know that I was leaving, and that there would be no one to carry him outside the next day, or the day after. I thought about my goals and realized that as I go to college and pursue my dreams, Jose will still be here, and there may be many days when he will not enjoy the simple pleasure of seeing the sky. This boy is a child, and it crushes me to know that despite all of the love the nuns offer, they do not have the resources to care for any more than rudimentary needs for many children. They are fed. They are clothed. They are loved. Nonetheless, there are so many of them and too few resources to allow the kind of one-on-one attention they deserve.

We forget how fortunate we are to have our basic needs met: food on our plates, the ability to walk and talk, the pleasure of going outside. Seeing Jose’s expression as he looked at the sky for the first time possibly in months, is something I will never forget. I am not going to say that bringing this boy outside will change his life, but I will say that at the time, that moment meant everything to him, and I am so grateful that I was able to provide it.