When I first planned my trip to Cochabamba, Bolivia, I was adamant that I did not want to serve in an orphanage. I had learned about the problems with orphanage care and understood the value of children living with their families. So, when I learned that only approximately twenty of the more than 120 children at La Comunidad Terapéutica went home every night to their families, I was apprehensive. But, then I met “las hermanas," the Spanish Catholic sisters who operate the facility, and I learned more about why so many children never go home. 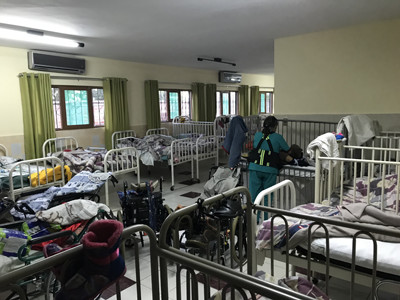 In Bolivia, there is a lack of education concerning the disabled and there are few resources for their families. Because of this, many parents choose to leave their children in the care of facilities like this one. This is a better alternative to the realities that some of these children face. On my first day at La Comunidad, the school’s psychologist recounted vivid stories about children who were abused at home by their families before arriving here, some suffered from disabilities caused by traumatic abuse. In one incident, a baby was thrown against a wall and now lives here with intellectual and physical disability as a result of that abuse. Hearing these stories was emotionally moving, but later putting faces to these stories was even more powerful.

On my first morning volunteering at La Comunidad, I woke up early at 7 a.m. and I was greeted by my host mother who had brewed some mate (a traditional Bolivian drink), the table was already set with my favorite breakfast: special bread from a market down the road and dulce de leche. After conversing over desayuno, I headed out to catch a trufi on the side of a busy road. As I flagged down the van, I looked around me and truly realized how foreign I was. Here was me, a 5’ 11” girl with blonde hair next to Bolivians who were around 5’ tall with dark hair; to say that I felt like an alien is an understatement. Sitting on the ground of the extremely overcrowded trufi, I was filled with anxiousness, but above all: pure excitement. After a half hour of chaos on the van with sharp stops and starts, I finally arrived at the orphanage. The journey that I had been dreaming of for months was about to commence.

In the mornings, La Comunidad is quiet. Many of the staff don’t arrive until 8:30 a.m. I walked to my assigned building, designated for children with physical and intellectual disabilities who range in age from 5 to 20. In the mornings, the caretakers bathe all of the children and then lay them wrapped in towels on their beds. Because the orphanage is understaffed, many sit there for a long time waiting to be clothed.  When I arrived at the building, I helped to expedite that process assisting in the dressing of two boys: Jose and Luis. 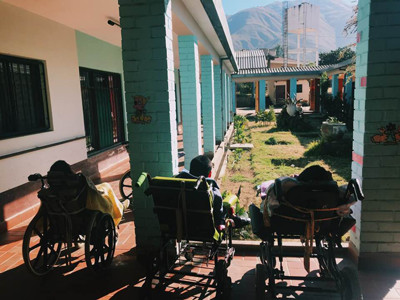 The task of dressing a child seems easy, but working with physically handicapped children in a third world country where physical therapy is not always available, is not simple. Many of the children’s muscles and joints are rigid and inflexible due to lack of movement, so it was hard to maneuver the clothes around their brittle bodies. I awkwardly tried to put a jacket over Jose’s arms, but afraid that his stiff and seemingly fragile arms could break, I asked for the assistance of another caretaker. In this moment I felt a sort of shame and awkwardness stemming from the intimate experience of dressing another human being but trying to do so with care and compassion yet with uneasiness and a degree of uncertainty. Once all of the children were clothed, we wheeled them from the crib room to the main room for breakfast.

The main room’s walls are lined with sofas, and many of the children are placed against pillows, waiting to be fed. The other children are stationed in a row in front of the couches, also patiently anticipating breakfast. Feeding the kids is a process that takes time. Many of the children have trouble swallowing their foods while others have little preferences and nuances about how they like to eat, habits that one needs to learn in order to be successful feeding them. Breakfast time is when the rest of the staff arrives, so I was greeted by the warm-hearted nuns who welcomed me and made me feel at home. Watching las hermanas feed the children for the first time that morning, I was so inspired by the pure love they radiated: I could feel how much they truly cared about each individual child.  As the children ate, the nuns sang songs, talked, and complimented the kids. They would smile and exclaim, “¡Ahh mi guapo chio amoroso!” or “¡La bonita chica con una sonrisa!” I felt a sense of awe observing the positive energy las hermanas gave out, their genuine love for each one of these unique children. I could see from that very first day that they had a deep respect for the humanity of each child and treated each as equally deserving of love and affection regardless of disability.

After breakfast, I changed roles, going to help out with el centro dia, the day care. These children all have learning disabilities such as autism and down syndrome, but unlike the majority of the children in the facility, they go home to their parents once the day is over. We played many games, but focused on activities that the children struggled with such as learning to read and write. I worked with the day students for around four to five hours, and then went back to my house once the class was dismissed. As I walked home from my trufi, I felt a sense of emotional relief. Although this was my first official day at the orphanage, the psychological toll of seeing children experiencing such hardship was tough to face. I was motivated to help in every way I possibly could, but I also knew that ultimately it would be hard for me to make a lasting difference on such a broken system.

When I finally arrived home, I was welcomed by my host family with a delicious meal of potatoes, chicken, an assortment of vegetables, and one of my host family’s favorites: Coca-Cola. Lunch is the biggest meal of the day in Bolivia, so it is customary that the family return to eat together and then go back to work. Once almuerzo was over, I went back to La Comunidad to continue working. I felt satisfied with a productive morning, but I knew that I was only halfway done with my day.

When I arrived back at the orphanage, I realized that I was not scheduled to do a specific activity for another two hours. Since I had extra time, I decided to take it upon myself to give some individualized attention to the children living in the 5-20 PS (physical support) building. When I entered, I saw the kids in the same positions as the morning, but this time, some of the kids in the chairs had their arms and hands restrained. I asked one of the caretakers why, and she replied that the children often try to gnaw on their hands or sometimes hit things involuntarily.

When I heard this,  I felt overwhelmed with emotion, knowing that these incidents were likely a result of a lack of physical and emotional stimulation for these children who sat with transfixed eyes staring into nothingness: a symptom of the understaffing of the orphanage. I came over to one of the little boys named Julio whose hands were tied and squeezed his hand. To my surprise, his bleak face immediately brightened, and he began to laugh. Such a simple action, the squeeze of a hand, evoked joy with ease; he craved even the smallest bit of attention.  After staying a short bit in the main room, I wheeled  eight of the kids over to the playground where we spent the next few hours. Then, I brought them back and went over to help run a physical therapy session with two volunteers from Spain. The day finally came to a close with one more meal- dinner for the children, a trufi ride home, and a reflective chat with my host mother over another cup of mate.

Only two days into my experiences in Bolivia, it was readily apparent to me that I could make a difference in many small ways but also that the challenges I would face would be much larger than I had imagined. I had been adament that I did not want to volunteer in an orphanage, yet, here I was in an orphanage where more than a hundred children were fed, clothed, and loved, but also where many of those same children seemed in need of more attention than they were receiving. I was energized, I was overwhelmed. I was hopeful. I was inspired.