I spent two weeks teaching basketball at the Allen V. R. Stanley Secondary School in Uganda, a co-ed boarding school for the athletically talented that offers free tuition, located in a village 10 miles west of Kampala. This is a unique school created by a family member where I was able to bring my passion of basketball to all 160 students in grades S1-6, ranging from 11-17-year-olds. But what I got out of my experience was much bigger than basketball. 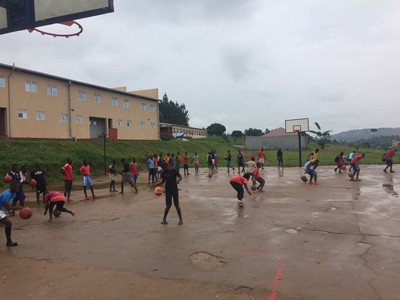 Each day, I woke up at 7:30 a.m., ate breakfast then prepared my plan and got set up before teaching basketball to my first group at 10 a.m. The students were well awake by 4 a.m. for their morning prep to get ready for the day. This includes taking a shower, putting on their school uniform, studying for their classes, and eating breakfast at 6 a.m. before starting class at 7 a.m.

The older students have class until 10 a.m. then play sports for 2 hours, whereas the younger students have classes until noon. I split the older students into two groups of 40 and taught each group for an hour while the other group played baseball or softball. I worked alongside the preexisting basketball coach, who really didn’t know much about basketball besides playing pickup. Earlier in the week, he and some of the teachers at the school participated in the drills with the students then later in the week, I showed him the plan and drills for the day and he would work with the boys while I worked with the girls. We started out with dynamic stretching then split the girls and boys and did a series of drills working on ball handling, shooting, passing, and layups to build fundamentals that they were often lacking in. Then we moved to more complex drills like the 3-man weave and 3 on 2/2 on 1 to build on teamwork in game-like situations.

At the end of the session the students played 3 v. 3 and eventually 5 v. 5 as the week progressed, implementing team concepts such as setting a screen, give-and-go and back door moves. The first day of scrimmaging I noticed they had a natural sense of fast-break basketball from their soccer experience but it was very helter-skelter, without any sense of organization. As the week went on they were able to use the plays and fundamentals I taught to play a more organized game. At 12 p.m., I would head to lunch with the students which was outside under a pavilion looking out over the beautiful and luscious valley.

Lunch was typically rice, plantains, and sometimes a small amount of beef which was made in 3 huge cooking pots over an open fire and stirred with a 3-foot wooden spoon. From 1-3 p.m. I worked with the younger group while the older students went to class. Many of the younger students would often stay at the court and the older students would come after classes ended to work on the skills I had taught that day. This was very rewarding to see the immediate impact of my teaching on their desire for learning basketball. The students became so interested and enthusiastic about basketball that even on the days when it rained, they were determined to not let it stop them. One morning I was unsure if I would teach since it was raining, but as I looked out the window I saw a little Ugandan boy, Sam, squeegeeing the water off the courts; soon after, he was joined by twenty more boys helping him. After the later sessions, the students often asked me to join in on their pickup games. We would play for hours, and after a long day I often felt myself too exhausted to keep playing, but the thought that they woke up much earlier and had a full day of classes and still wanted to play more, pushed me to keep going. They were probably much more exhausted and hungrier, but they had the biggest hearts that nothing else mattered but playing. They would keep playing until sun down if it wasn’t for being yelled at to get dinner at 6 p.m. After dinner, the students did their school work until 8 p.m., then gathered in the classroom for a student-run Christian worship service where a group of students would lead in prayer and songs for a couple of hours. It was inspiring how they all joined in praising God and showing thanks for their blessings. Even though their future was very uncertain, they were at peace at the end of the day and had strong faith in God and His plan for them. 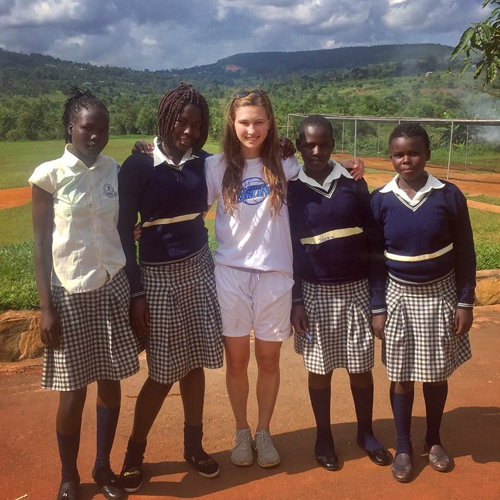 A real example of this was shown to me after coming back to the U.S. We were trying to get one of the girls, Joan, into a U.S. high school but it did not work out since her entrance scores were too low. Despite her disappointment, she showed her faith in a text to me after hearing the news. She said, “I would like to thank you from the bottom of my heart and may you please accept my humble appreciation. I can’t per now change the direction of the wind but what I know is that I can adjust my sails to always reach my destiny. I also believe God’s planning is the ever best and His proclaimed word over us is always greater than our worries. I am happiest for having met you. I pray for God’s blessings upon your entire family and will always remember the kindness you showed me.”

As the day came for me to leave, it was the hardest goodbye. The girls ran over to me, gave me hugs and small gifts which were often bracelets that said “I love you” on them. It struck me how genuine they were because many of them had very little but they were willing to give that up for me. Still, as many months have gone by, there isn’t a day that goes by that I don’t get a Facebook message or video chat call from many of them. The Ugandans at the AVRS School showed me true love and compassion and even if I never see them, I will always carry a piece of them in my heart and I know that we will always be true friends. My short time with these students has accomplished much more than teaching basketball, but has given me lifelong friendships.