Perhaps the most prominent concern I had throughout my Parkin Fellowship was that of so-called “voluntourism.” The concept of voluntourism, essentially, reflects a stereotype in which a Westerner travels to a foreign, often impoverished country to partake in service, often through an external organization. Upon arrival, the individual engages shallowly with the work they are doing, ultimately spending more time as a tourist than a volunteer. When I first arrived in Costa Rica, that concern was one of the first that I voiced to my roommate, Seth, asking him “Is the work we’re doing actually meaningful?” “Don’t worry,” he replied, “this is definitely one of the most direct and impactful programs that you could have chosen.” Over the course of my service at FIMRC’s Alajuelita clinic, Seth’s words rang true, and my fears began to diminish. 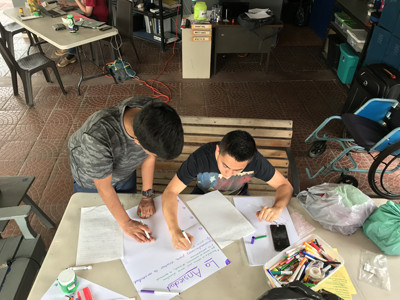 Every morning at 8 a.m., a large, bouncing van rumbled down the road and picked the volunteers and me up from our respective host families. Playing a notoriously repetitive mix of Western and Latin pop over aging loudspeakers, the van would take a winding route from Santa Ana to the clinic in Alajuelita. The van jostled violently as it climbed, but eventually, we would arrive at the FIMRC clinic, located adjacent to a Christian school. Each day, we were assigned to a clinical rotation that was divided into four “stations”: Psychology. Exam Room, Waiting Room, and Pharmacy. Since the FIMRC clinic only had three staff members- Karen, the physician, Tatiana, the psychologist, and Dayan, the project coordinator-it largely relied on volunteers to manage and operate it on a day-to-day basis. As a result, by working in each station, we were able to interact with patients and contribute to the success of an often-under-resourced clinic. Although, retrospectively, my growing friendships with my fellow volunteers and staff played a prominent role in defining my experience, my interactions with patients over the course of my service proved to be the most formative.

On my first day, for instance, I was sorted into the Exam Room. Here, we would spend the day helping to treat patients while aiding the head physician. Over the course of the day, we saw several patients, including pregnant women, children with autism, and individuals with a host of illnesses. My most poignant memory, however, was of the day’s first patient: Jane*. To understand Jane’s story, one must first understand that Costa Rica faces an enormous refugee crisis. Amidst past and present political turmoil to the North, in Nicaragua, refugees are fleeing across the border to Costa Rica in pursuit of a better life. Often taking menial, low-income jobs, the Nicaraguan refugees are both impoverished and undocumented; therefore, many are not able to access Costa Rica’s universal healthcare system or afford private health insurance. Jane counts herself among these refugees, and so, when she was bitten by a dog one year ago, she was too afraid to seek medical attention (in fear of potential cost and her undocumented status). A year later, the dog bite on her leg, exacerbated by pre-existing vein conditions, has developed into a painful vein ulcer. When I first saw Jane, the skin on her lower leg had largely peeled away, exposing the muscle and tissue underneath. Every appointment, her festering bandages were unwrapped, and the wound was cleaned. As Karen, the physician, told me, her leg would likely never be the same. Fortunately, the ulcer was bleeding, meaning that the tissue in her lower leg was healing. On that first visit, as Jane sat down for her regular cleaning and examination, tears started falling from Jane’s eyes as she lamented her story. Heaving, she despaired of her circumstances: how she feared to seek medical attention before she heard of the FIMRC clinic, how she struggled to pay her bills and debts at home, and how she was forced to walk on her injured leg for one hour to reach the clinic.

Jane’s story was moving, and I was suddenly struck by the realization, clichéd as it may seem, that I was not at home anymore. Nor was I in a sheltered or artificial environment. As we applied medicinal honey strips underneath Jane’s bandages, Jane became much more human in my eyes. Her narrative, rather than encouraging pity or sympathy, dignified her. She wasn’t a grey-scaled Red Cross promotional character; instead, she was a breathing, complex, and incredibly human character. And, as I quickly realized, I was on the “front-lines” of a medical environment. In this raw, unfiltered experience, we helped patients who genuinely required assistance. We interacted with patients who had endured hardships stemming from pertinent socio-political crises. Seth’s words rung true; the people who arrived at the clinic relied on the free services it provided. Serving with FIMRC, consequently, became a profound and eye-opening experience. At the clinic, the volunteers, staff, and I interacted with human people facing uniquely human problems. Regardless of where we grow up or where we live, those problems represent the core of the human experience. When we despair, the boundaries that denote our social, political, or geographic differences begin to dissolve. Having been reduced to a fundamental state, we empathize, we relate, and we heal. And as I learned from Jane and several others, we persevere.

*Names have been changed out of respect for privacy.