It was a second dream come true for me to direct our amazingly talented and hard-working students at the Edinburgh Festival Fringe this past summer in Scotland in the play, Almost Maine. As Drama Director, in my eighth year at the Academy, I’ve been privileged enough to take two separate groups to perform on an international stage, and our more recent trip was even more exciting than the first! 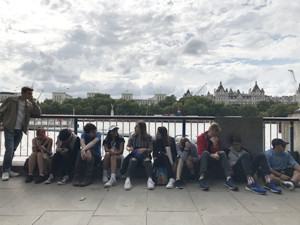 This time around we spent seven fun-filled days in London where we saw some AMAZING theater: Othello at Shakespeare’s Old Globe, Young Frankenstein and Kinky Boots – the last being one of the best experiences of my life.  Not just because the show was incredible, but because watching the faces of the 13 Shady Side Academy students full of complete and utter amazement was the best gift I could ever have asked for as a drama director and lover of theater.  After the show ended, they buzzed for hours about each and every moment, replaying scenes and songs in collaboration as we traveled back to our accommodations.  It was a sight to see and reminded me of why I love theater – the way it moves audiences through the telling of stories with characters who come alive on stage and remain in your memory long after the curtain drops. 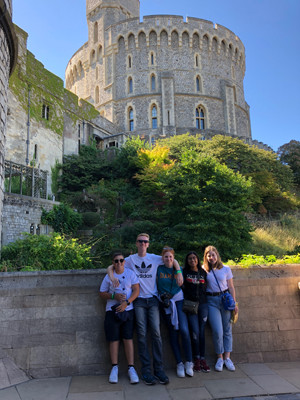 The Tower of London, Westminster Abbey, Buckingham Palace, Windsor Castle, Stonehenge and the cruise on the River Thames were just a few other amazing highlights before we left for Edinburgh by train.  In Scotland, we performed three shows to larger audiences than our first production (two years ago) and the 13 students making up the cast and crew were amazingly calm as we mounted our show after only a 90-minute technical rehearsal. I was very proud of them as we received so many positive comments from patrons who saw our show, such as “I can’t believe these actors are in high school!” With the help of my incredibly talented technical director, Austin Davidheiser, and his wife and fellow staff member, Amy Davidheiser, we were able to pull off a terrific production and keep all 13 students safe and happy for two full weeks abroad!

In Edinburgh we had a bit more free time, so most of our down time was spent seeing shows at the world’s oldest theater festival on the planet and taking in the sights and sounds of a beautiful city. A few other highlights included the Royal Military Tattoo, Stirling Castle and a hike up Arthur’s Seat in Holyrood Park for a few of our more adventurous travelers.

There were so many great things about the trip, but I think the best, by far, was the bonding experience that the students went through while they were there – they’ll never forget it, as long as they live.  I feel so truly lucky to be the person to have made it happen for them and just as lucky to be employed as the drama director at Shady Side Academy, who I thank for the opportunity.