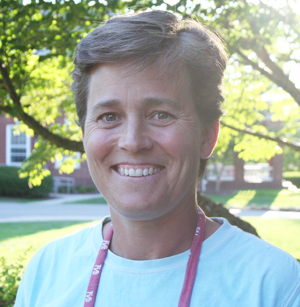 Susan B. Whitney, a native of South Dartmouth, Massachusetts, began coaching Girls’ Cross Country at SSA in 1991. She competed in cross country, indoor and outdoor track in high school and college (Colby College, Waterville, ME). The SSA girls’ cross country team has enjoyed tremendous growth and success over the years, and continues to be a popular fall athletic choice for young women of the school. SSA Girls’ Cross Country celebrated its first WPIAL title in 2008, and was WPIAL runner-up in 2009. The team has won section titles in each of the past two seasons, 2009 and 2010. Ms. Whitney calls the Point Breeze neighborhood of Pittsburgh home, where she and her husband, Tim McVeagh, live with their two daughters, Weezie and Whitney.