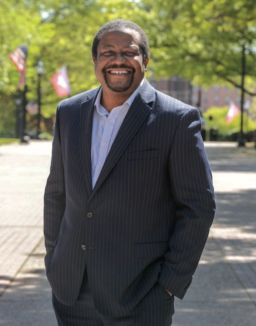 William Generett opened up to his favorite teacher as he walked around the quad of Shady Side Academy Senior School.

As an African American student, he didn't see many others who looked like him either on campus or in the surrounding neighborhood. It was the late 1980s, and he was upset about racial inequality across the country. Even going to the senior prom was a painful reminder that the world wasn't fair. While he was allowed to go to the dance at the country club where it was being held, they didn't have any Black members back then. Should he even go?

Dr. John Sutula, his philosophy teacher, listened intently as they walked around the campus together.

Sutula encouraged Generett to share his frustrations. He also told him to pair his passion with logic so he could make the best arguments to fight for the causes he believed in.

Generett had already read about Malcolm X, Dr. Martin Luther King and other civil rights leaders in the United States. Sutula further broadened his worldview by directing him to books about Bishop Desmond Tutu of South Africa and other activists around the globe.

"I was a kid who was angry about inequality," he said. "Dr. Sutula really helped change my life. He helped me translate that anger into motivation to do better. He challenged me to look at my arguments from a logical perspective."

When Generett returns to campus now, he sees a student population that is much more racially diverse – with 38 percent identifying as people of color, and a leadership team dedicated to inclusion.

But one thing hasn't changed: Generett's commitment to economic and racial equality.

As the vice president of community engagement at Duquesne University, he has helped forge and strengthen partnerships with surrounding neighborhoods in Pittsburgh – from the Hill District and Uptown to Hazelwood and the Mon Valley.

Though the Catholic university has a long history of community service, Ken Gormley made it a top priority when he was named president of the school in 2015. One of his first acts was to create a new Office of Community Engagement, and he went looking for a cabinet-level vice president to head it with a wealth of experience.

"Bill's name kept coming up over and over," Gormley said. "He was highly respected. As soon as we sat down to talk about this, I knew he was the perfect person."

The projects that Generett's office supports are wide-ranging. For example, he works with the Center for Integrated Health, run out of the School of Pharmacy, on its asthma prevention work. Dr. Jennifer Elliott, an associate professor of pharmacy, and students hold asthma clinics and screenings in Hazelwood and schools in the Mon Valley.

"We have some of the worst asthma in the country here in this region," Generett said. "They work with school nurses to provide comprehensive treatment, anything from inhalers to the right kind of medicine to working with parents." He said the number of asthma-related emergency room visits from children in the neighborhood has dropped precipitously.

Through his expertise in governmental relations, Generett has aided the university's plans to open up a new College of Osteopathic Medicine by the year 2023. Generett has reached out to government and community leaders seeking funding for a second medical school in the city. "He has great ties to the foundation community and is greatly respected," Gormley said.

Generett is a board member of the Pittsburgh Foundation. Lisa Schroeder, president of the foundation, said Generett is "a big-picture thinker. He is not afraid to step up and meet really sensitive issues in the community, including race." He also serves on the board of the Pittsburgh Cultural Trust, the Carnegie Museums of Pittsburgh and Shady Side Academy.

To support economic development in the Hill District, Generett has been working with the August Wilson House nonprofit to help restore August Wilson's childhood home, listed on the National Register of Historic Places. The vision to transform the dilapidated house into a museum and cultural center with a residency program for artists is dependent on substantial fundraising efforts. "It's a pretty small house, but it's going to take $7 or $8 million to make it function like a small museum, community center and arts venue," Generett said.

The project gained national attention in 2018 when actor Denzel Washington came to Pittsburgh to announce a combined gift of $5 million from himself, Oprah Winfrey and other celebrities. Generett met Washington at the groundbreaking ceremony, who both starred and directed the movie adaptation of the August Wilson play Fences.

Gormley called Generett "the consummate professional. He is a gentleman. He's also very action-oriented and decisive. He is my kind of person."

Generett's problem-solving skills became even more crucial this spring when the COVID-19 pandemic changed campus life. To minimize health risks, Duquesne and universities throughout the country were forced to move to online classes, losing revenue in the process.

Overseeing the University's government relations, Generett helped Gormley lobby for funds through the higher education portion of the federal stimulus. Some of those funds are designated for health care programs that can train workers who are on the front line of treating people with COVID-19. "Duquesne University has some of the best health care programs – nursing, pharmacy, physician assistant, OT, PT – in the United States, and the university has plans to open a medical school in 2023 that has a focus on graduating family practitioners who remain in the region," Generett said. "The coronavirus has shown us that there is more need than ever for more workers in all health care fields."

Also devastated by the statewide closings were small businesses in the neighborhoods Generett has supported through economic development programs. As executive in residence at the Duquesne University School of Business, he has worked with the university's small business development center to help as many entrepreneurs as possible, starting with the application process for stimulus funds.

Generett grew up in Point Breeze in a family that was passionate about civil rights.

His mother's uncle was a prominent civil rights attorney who was best known for representing Martin Luther King, Jr. and the student who integrated the University of Alabama. His father, William, who was a medical doctor, and his mother, Mona, who was a Ph.D., a civil rights leader and a retired vice president of community development at Dollar Bank, both stressed the importance of education and fighting for racial equality.

Generett attended Shady Side Academy from kindergarten through high school. "I was the second African American lifer," he said. He was one of the founding members of the Black Student Union at the Senior School.

Dr. Sutula, his philosophy teacher, said he had a great sense of humor. "Sometimes when people would disagree, he would diffuse it with his sense of humor while still adhering strongly to his side."

On their walks together, Dr. Sutula remembers how the young man expressed how he wanted to be part of the larger group but sometimes felt separated from his white classmates. "It was difficult to feel like a representative of his race, such as being good at basketball or knowing rap, rather than finding himself," Sutula said.

Generett grappled with the decision of whether to go to his senior prom at a country club with no Black members. "I had to ask myself, 'Do I go or do I protest?' I decided to go along with my Black classmates, but we felt bad celebrating in a place that did not see us as full humans."

Generett said he was grateful for his years at Shady Side. "It was a great liberal arts education that served me well throughout my career."

Upon graduation, he chose to attend Morehouse College, a historically Black college and the alma mater of the Rev. Martin Luther King Jr. Generett majored in political science and interned for Congressman John Lewis, the civil rights icon. "He was just as nice and caring as you see in his public persona. Usually people in Congress don't talk to interns. He made a point to talk to us."

As a new lawyer, Generett practiced at a corporate law firm started by an African American woman that primarily served minority-owned businesses. That set him on the path to help businesses in distressed communities in Pittsburgh. As the region reinvented itself from a steel town to a medical, educational and high-tech center, too many African Americans were left behind, he said. "When you look at African Americans in Western Pennsylvania, it has some of the worst metrics in terms of success, health or wellness."

His goal was to help turn that around. "We tried to provide opportunities for African Americans to participate in the newfound prosperity our region sees. We helped a lot of tech and innovation companies to go into moderate and low-income neighborhoods, so the economic prosperity could spread out and not just be concentrated in Oakland."

From 2007 until 2017, Generett was the inaugural president and CEO of Urban Innovation21, a private-public partnership that supports the growth of entrepreneurship and innovation in underserved communities.

The nonprofit held grant competitions for entrepreneurs in the Hill District, Homewood and other underserved neighborhoods, and participants attended business education workshops before making their pitches. The group was instrumental in getting many high-tech companies to start, relocate and grow in the Hill District/Uptown area. Urban Innovation21 also became part of Kiva, an international organization that offers microloans to low- income entrepreneurs around the world.

"Bill is a thought leader when it comes to technology-based economic development," said Sheri Collins, senior director of the Office of Corporate Relations for the Pennsylvania Department of Community & Economic Development. "At his core, he is passionate about helping other people."

He was also appointed by President Barack Obama to the U.S. Department of Commerce's National Advisory Council on Innovation and Entrepreneurship (NACIE).

Generett first met Gormley after working with Duquesne University to launch The Citizen Science Lab, where Duquesne professors and students worked with kids from underserved neighborhoods who didn't have access to top laboratory equipment. "It was a deep dive into science, and very creative," Gormley said.

Generett feels at home at Duquesne, where his assistant and office manager, Joan Hilton Hayek '08, is a Shady Side graduate, too. He also loves returning to Shady Side, a place that has a much different cross-section of students than when he was there.

"Shady Side has changed in remarkable ways," he said. "You just look at the leadership of Bart Griffith and how he has successfully dealt with inclusion at his previous jobs. Also, I am excited about the work of Lillian Grate, the director of equity, inclusion and community relations. Shady Side is doing a whole lot better with issues of diversity, and I look forward to working with the board and Bart to continue to build upon this progress for many years to come."