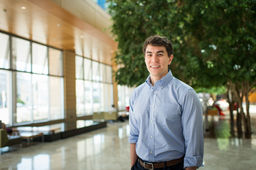 At age 14, Reid Van Lehn '05 played a sci-fi video game, but he wasn't content to just zone out and rack up points. Using his self-taught computer programming skills, he created code to change the game into a Special Forces combat adventure, the type of modification the manufacturer encouraged its gamers to create and share with each other.

But Van Lehn's rudimentary coding skills didn't allow him to create a fun, complex game. When he posted his modified game on the Internet, disgruntled gamers flamed him for the lack of sophistication. It was outright game-shaming from anonymous critics – and it stung.

That's where many kids might have given up, but Van Lehn wasn't an ordinary teenager. "I want to learn computer programming," he told his father, Kurt, then a professor of computer science at the University of Pittsburgh.

A year later, the teenager began learning computer programming in an intensely academic setting. His father, whose research focused on the best way to learn science, knew of a graduate student at Pitt who was organizing a tutorial session to teach Java to novice programmers among his colleagues, and his dad invited him to join.

"It was a few graduate students and a snot-nosed kid," said Van Lehn, exhibiting his typical self-deprecating humor. "I had all these wonderful opportunities growing up in an academic household."

A few years later, the teenager seized another scientific opportunity. When his father developed a self-directed tutoring system for college-level physics, his teenage son volunteered to take it – just for fun. "I was a guinea pig," he said with a laugh.

The many opportunities to pursue science at home – and his burning curiosity nurtured at Shady Side Academy - have paid off in a big way.

Named to the 2016 Forbes Magazine 30 Under 30 list in science, Van Lehn is leading the way on some of the most promising, and most complex, research on drug delivery systems.

The computer programming skills he first honed as a teenager now help him to predict the precise molecules that allow a drug to target a precise diseased cell. He has been conducting his research, first as a doctoral student at MIT and then as a postdoctoral scholar in the division of chemistry at the California Institute of Technology. This year, the 29-year-old is starting a new job as a tenure-track assistant professor at the University of Wisconsin-Madison.

"I just see the idea of predicting the behavior of these molecules using computer simulations as really cool. A lot of what we do is take the classical equations of motion you would learn in high-school physics, and then apply the same laws at the atomic level."

He and other scientists are joining forces to develop treatments for some of the most devastating diseases of modern life, including cancer.

We are actually very good at killing cancer cells," he said. "In the lab, drugs are very effective – but in a test tube, you can also kill cancer effectively with a gun. The problem is when you administer the same drugs to a patient, you kill healthy cells too, and you get these horrible side effects. This problem of off-target effects is true of many therapies."

As an alternative to the wide swath of destruction caused by chemo, scientists are excited by the possibility of delivering new therapeutics into only specifically targeted cells. For example, a relatively new therapy uses small interfering RNAs (siRNAS), composed of double-stranded pieces of nucleic acid, to turn off the production of proteins that cause fatal diseases and chronic conditions in humans. But there's a problem in getting siRNA – or small-molecule drugs – to enter the diseased cells. Commonly mistaken for foreign objects by the liver, kidney or spleen, they are often rejected by the immune system before they arrive at their intended target.

Current lab research is underway to identify which molecules will facilitate the transport of the drugs to the targeted diseased cells. Instead of testing thousands of possible particles in the lab, Van Lehn uses computer simulation to provide chemical insights into which tiny molecules allow a given drug to penetrate a diseased cell. "What do I put on the surface of a nanoparticle so it goes into a cell?" he asks. "The major challenge is that there are thousands and thousands of choices, and it's impossible to screen them all experimentally. We used computer simulations to understand the underlying design principles. We can say to an experimentalist – 'Here is your chemical toolbox. These are the molecules that will be most effective.'"

He knows that this kind of scientific inquiry can take decades. "It's a long, long slog, but the payoff is worth it."

In June, Van Lehn took his research to another level by opening his own lab in Madison. He is working with three or four graduate students and cycling in some undergraduates to learn about computer-assisted research. "One of the great things about being a young professor is that I am very excited about the day-to-day aspects of my research, and this is the kind of passion I want to spread to my students."

Van Lehn knows the power of inspiring teachers, both in his home and at Shady Side. His parents were both mentors and professors who valued education enough to focus their research on the best way to learn. His mother, Michelene Chi, is a cognitive psychologist and the Dorothy Bray Endowed Professor of Science and Teaching at Arizona State University.

They sent him to Shady Side Academy from the Junior School on up. "It was a fantastic school," Van Lehn said. In fact, people call him a lifer - although technically he missed fourth grade because his parents left Pitt for a year for a sabbatical at a center near Stanford University.

When his father discovered that the math instruction at his new California school lagged behind Shady Side Academy, he called the teacher to ask if his son could be moved to a higher level.

"So you think Reid is not getting enough math? We can fix that," Kurt recalls the teacher saying. "Come in at 2 p.m. on Friday."

Kurt wasn't sure how observing Reid's math period would help, but he showed up in class. The teacher handed him a math enrichment book for fourth graders and pointed to a small group of kids. "Here is your book. Here are your kids."

"But I'm not trained for that," he said, flabbergasted.

"My first rule is that the first parent who complains becomes the teacher."

Once he got over the initial shock, Reid's father was a good sport. "He dutifully showed up and tutored," Reid Van Lehn said. "My parents made sure my education was good."

So when Van Lehn returned to Shady Side in fifth grade, his math skills were razor-sharp. His passion for math and science only grew during his time at the Middle and Senior Schools.

He viewed John Landreth, his organic chemistry teacher, as a mentor – both in the classroom and as his swim coach. "He taught organic chemistry, which was not typical for high school. That class served me all the way up. I still remember things from that class."

In the pool, Landreth also inspired Van Lehn, a sprinter who pushed himself hard. "He taught us about work ethic. He had a great influence on me."

Kurt said his son would go to optional 6 a.m. swim practices, and the experience of becoming an athlete transformed him. "I am not athletic. Neither is my wife," said Kurt, now the Diane and Gary Tooker Chair for Effective Education in Science, Technology, Engineering and Math at Arizona State University.

"The culture of discipline and respect on that team changed his personality from being doubtful of himself to being confident. The coach got the athletes to be proud of each other's successes."

Joseph Reilly '05, Van Lehn's high school friend at SSA, was also on the swim team. He said his friend was competitive only with himself. "He was driven to do his best, but he would never rub it in anyone's face. He was hard on himself. It served him well. It drew him to great heights."

His intellect was immediately obvious, Reilly said. "You could tell right away he was brilliant. If you were talking through problems, you could see the pace his mind was working. He was a voracious learner. He would take to anything. He took philosophy and really got into it."

Van Lehn remembered walking around the quad with Dr. John Sutula, who would ask students about their lives. "He was very concerned about the well-being of students. He was vested in our education and our personal growth. I really appreciated that."

The teenager also did scientific experiments on his own. In a preview of his career choice, he wrote a computer program in high school that enabled him to visualize molecules. "It was a good time."

In high school, he was a state finalist for the Wendy's High School Heisman, an award given to students who combined academic and athletic accomplishments. Those kind of honors never got to his head. "He was not one of those people who held himself up as better," Reilly said. "He was very kind, very empathetic. He cared a lot about friends."

His parents jokingly referred to 7 to 8 p.m. on weekday evenings as "the calling hour," because that's when Reid's friends would call and ask him for help on homework. "He was very generous with his time, and he was good at explaining things," Kurt said.

His passion for science led him to MIT, where he studied material sciences and engineering, receiving a bachelor's degree in 2009 and a Ph.D. in 2014.

Though he always envisioned himself as a scientist conducting his own research in the lab, he discovered that experimental lab work didn't appeal to him and wasn't his strength. Instead of making nanoparticles in the lab, his undergraduate advisor suggested that he do theoretical research on computers - a way of combining his computer expertise with his desire to contribute toward treatments for deadly and devastating diseases.

The advisor introduced Van Lehn to a new rising star professor, Alfredo Alexander-Katz, who was doing research in the area. "We hit it off. I was one of his first students. He introduced me to the idea of using computer simulation to answer bigger questions."

At MIT, Van Lehn authored papers with titles such as Effect of particle diameter and surface composition on the spontaneous fusion of monolayer-protected gold nanoparticles with lipid bilayers.

But he also had a gift for explaining such complex, arcane concepts in simpler terms. In fact he won the 2013 John Wulff Award for Excellence in Teaching an Undergraduate Subject. He also won the Materials Research Society Graduate Student Award Gold Medal and many other honors.

Though all that recognition was gratifying, he was especially honored to be recognized by a national magazine as one of the top 30 young scientists in the country. "It is very humbling. I know so many gifted researchers; so many people doing amazing things. To be recognized, I am very proud and grateful. "