Melena Ryzik '94: She Walks the Red Carpet So You Don't Have To 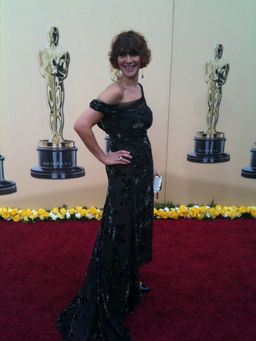 Melena Ryzik had never taken an acting lesson, but there she was doing a cold reading opposite famed leading man Michael Caine. In his distinctive British accent, the star of Alphie, Educating Rita, The Cider House Rules and dozens of other movies flawlessly delivered his lines, utterly upstaging the New York Times cultural reporter.


Ryzik, 36, was humbled by the acting legend and quipped that the experience was like "a meerkat attempting to slay a dragon," repeating a friend's line. No matter. Her reportage resulted in a captivating video segment for The Times entertainment blog The Carpetbagger. "It was an out-of-body experience," she would later say about acting across from Caine.

That Dec. 6, 2012, interview was the kind of coverage fans of the brainy red carpet blog have come to expect. Not only did Ryzik ask the legend to read lines opposite her, she had him demonstrate his acting technique of keeping one eye on the subject and the other on the camera. Then Ryzik, who used her easy laugh to establish an immediate rapport, peppered him with questions about his role as Batman's butler Alfred in The Dark Knight Rises.

During the Hollywood awards season, which stretches from the fall to the week after the Oscars, Ryzik gives Times readers insights that go beyond the glamour and gossip found in supermarket tabloids. For her, it's all about finding a novel angle.

"Covering the Oscar trail is like covering a political campaign, except there are much more attractive people," she said. "It is the same story, season after season. Who is going to win the horse race? It is figuring out new angles on an old story that has been told year after year."

Just as Hollywood goes into overdrive for the awards season, so does The Carpetbagger's lead writer. She works 20-hour days, churning out five blog posts daily as well as a weekly print column and video segment on the movie industry. "I drop off the face of the earth," she said. "I don't see friends." But she doesn't complain, because she loves her work. Besides, who'd want to commiserate about a job where you get to chat up Bradley Cooper and Jennifer Lawrence?

But don't expect her to swoon or namedrop. "I am not a fanboy," she said. "I talk to people about their work. I am not interested in what they had for lunch. People appreciate that."

Amy Wolf, her friend in New York, has watched her in action at many movie premieres. "She doesn't fawn over celebrities," Wolf said. "She doesn't mistake their friendliness and think they are besties with her. She is aware that they are networking to try to get the best press possible."

Ryzik, who just wrapped up her fourth season with The Carpetbagger, gets celebrities to open up by doing her homework. She has a flair for probing questions, said Wolf, a communications officer at the New York Community Trust.

Though Ryzik works many celebrity parties, she doesn't travel in a stretch limo. Instead, she puts on her dress and heels, then pedals her 10-speed bicycle through the streets of New York to premier parties in all weather. "I always tell her to wear more clothes, but she is pretty tough," Wolf said. "She can bike in the February air in heels."

Heels are her constant companion. "I am Russian," she said. "That is just how I was built. I am more comfortable in heels."

Wolf said Ryzik is known for her fashion flair, for finding a great piece in a vintage store or boutique or department store clearance rack. She is always asked if the Times gives her a clothing allowance. It doesn't. "I shop sample sales," Ryzik said.

One of her favorite parts of her job is covering directors and actors who are experiencing the rush of the Oscar spotlight for the first time. This year, the excited newbies included the cast and crew of Beasts of the Southern Wild, a fantasy about Hushpuppy, an intrepid 6-year-old girl who lives with her father, Wink, in a poor Gulf Coast island community. Ryzik covered the nomination of the 9-year-old actress Quvenzhané Wallis. She also flew to New Orleans to learn how to make donuts with Dwight Henry, the New Orleans bakery owner and first-time actor who played Wink.

Ryzik also enjoys writing about the less glamorous crew members who aren't in the tabloids. "The coolest thing is I get to go behind the scenes and visit with the sound guy, the production design guy, the people who do the nuts and bolts," she said. "In Hollywood terminology, they are called 'below the line.'"

When she is not writing about the Oscars or Golden Globes, she is a cultural reporter who uncovers offbeat attractions and creative scenes in New York and around the country. She wrote about a pool party held in a dumpster in industrial Brooklyn (yep, she took a dip). She also authored a feature on an "eco-art barge," which she described as a "3,000-square-foot experiment in community living and artistry." As Wolf puts it, "She goes off-off-off the beaten path."

One less-traveled route took her to the Boggsville Boatel and Boat-in Theater, a floating hotel in Rockaway, Queens. "She spent the night there," Wolf said. "She became friends with the woman who ran it, who connected her with another story.

"She doesn't just do her reporting and go home and read a book. She might hit five things a night and stay up until 4 a.m. She is impossible to keep up with."

Her knack for unexpected detours allows her to discover stories others would miss. On a recent day, she was riding her bike in Bedford-Stuyvesant and stopped to watch a 70-year-old man dancing to salsa music. "The man invited her and her friends to join in," Wolf said. "She lets life happen."

Ryzik was born in Russia but came to the United States at age 2. Quiet and bookish, she observed the world around her - good training for her future career. "She has a secret, shy side," Wolf said. "She has worked hard to counteract it."

At age 12, during a family trip to Russia, she told her mother she wanted to work for the New York Times. Attending Shady Side Academy in high school sharpened her writing skills. Teachers such as Elizabeth Garvey inspired her, as did the creative spirit fostered at the school. "There was a lot of liberty to create there," she said. "During my junior year, I directed a one-act play while making unusual casting choices. No one said, 'You shouldn't do this.'"

Upon graduation, she studied English at John Hopkins University and worked as a fact-checker at Baltimore City Paper, which published her first bylined article. She then moved to New York City, where she became editor of Internet World, a now-defunct online publication. Then she was hired at The New York Times as a news clerk. The 24-year-old walked through the newsroom door filled with reverence as she peered up at the long wall of Pulitzer Prize winners.

Her third day of work was Sept. 11, 2001, and within hours, she heard the police call come in. Something horrible was going on at the World Trade Center. She was quickly transferred to work on the story, interviewing firefighters and police officers who responded to the terrorist attack that downed the twin towers. She also wrote about 50 of the "Portraits of Grief," the Times' highly acclaimed profiles of the victims. "It was a pretty unusual way to start a daily newspaper career," she said. "I was still very low on the totem pole. I worked on one story for a year."

Ryzik, who had already freelanced articles for the Times, was hired as a writer in 2006. At a time of layoffs and retrenchment in journalism, she has carved out a niche that gives her the freedom to pursue her own ideas and find little pockets of creativity in the never-dull streets of New York and beyond. "I have a really rare gig," she said. "It's pretty cool. I also get to do fun profiles."

One of the recent highlights was her profile of pop icon Cyndi Lauper, who was every bit as cool as her image. She talked about writing the score for Kinky Boots, the Tony Award-nominated musical. Then Ryzik even received some head-turning advice from the star. "She told me what color I should dye my hair – a particular shade of Manic Panic orange."