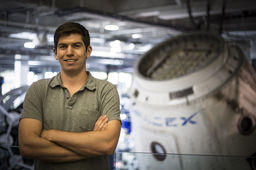 Inside Mission Control at SpaceX headquarters, Matthew McKeown stares up at three computer screens that are monitoring a spacecraft about to blast toward the heavens.

Taking deep breaths, he monitors the pressure, temperature and engine readings coming from the Falcon 9 rocket and Dragon spacecraft, which sits on a launch pad thousands of miles away in Cape Canaveral, Fla.

At the count of zero, the two-stage launch vehicle lifts into the air, moving slowly before accelerating to the speed of sound, a plume of smoke in its wake as it lifts the space transportation company's spacecraft high above the Atlantic Ocean. It's a picture-perfect takeoff on Dec. 8, 2010. Whoops of joy can be heard by the crowds who are watching a giant projection screen outside the SpaceX building in Hawthorne, Calif.

But it's too early to celebrate for McKeown and some 20 other engineers at SpaceX, a private company that is under contract for NASA for this mission. During the next two days, the engineers are on edge as they monitor the unmanned spacecraft around the clock as it zooms toward the International Space Station. Even when McKeown goes home after a long shift, he can barely sleep, preoccupied with the fate of Dragon.

It's not until Dragon reaches the space station safely with its cargo of food, clothes and science experiments that McKeown and other engineers high-five and hug each other.

McKeown, manager of the in-space propulsion engine development group at SpaceX, is elated at the successful mission. "It's your baby. It's so nice when you know it's there and it's safe."

In many ways, McKeown and his co-workers inside Mission Control could slide into the set of the movie Apollo 13 – minus the short-sleeve shirts and two-inch-thick Coke bottle glasses and plus the addition of a few female engineers. "It's amazing how similar it is," says McKeown, adding that a few of his coworkers put on a retro tie or vest for rocket launches.

SpaceX, started by visionary investor and entrepreneur Elon Musk, made history in 2012 when the Dragon attached itself to the International Space Station, exchanged cargo payloads and returned safely to earth – a feat previously accomplished only by governmental agencies. McKeown has been on the front lines of private aerospace history, doing testing of the Dragon and collaborating with designers who built it.

But Musk, who also started the Tesla electric car company, has much bigger plans for SpaceX. His goal is to send reusable rockets into space for interplanetary travel and transport people from Earth to Mars.

"The ultimate goal is to make the human species interplanetary and have people go to Mars," McKeown says. "We are not going to do that in the next six months. But that vision drives people and attracts great people. It's the best and the brightest. It gets me out of bed every morning, and I want to go to work."

When McKeown was hired in 2008 at the age of 22 as a development engineer, he was one of the first few hundred people to work for the company. Today SpaceX has grown to more than 3,000 employees. McKeown, 28, is already a veteran of the private space race, has received several promotions and has impressed his coworkers with his skills and his manner.

"There are obviously many intelligent people at this company," says Robin Titus, manager of in-space propulsion at SpaceX. "What really makes Matt stand out is he is incredibly humble as well. I don't know anyone else who's so smart and so humble simultaneously."

McKeown also shows wisdom beyond his years, Titus says. "He's an old soul. He has a maturity about him that you don't see in many people who are the same age."

Even as a kid, McKeown had a precocious talent for building rockets.

Sure, lots of little boys delight in setting rockets off in their backyards. But McKeown kept building bigger and more sophisticated ones that required bigger launching pads and more room.

He started out small, in the backyard of his Squirrel Hill home, before moving to a field behind a school and finally to Schenley Park.

One day, when he was around 10, his rocket malfunctioned and the return parachute didn't deploy. The nosecone of the rocket came crashing back to the ground at high speed, landing between startled sunbathers. "It was a wake-up call," says his father, Dave, who did some quick research and discovered the Pittsburgh chapter of Tripoli Rocketry Association. McKeown became one of only two kids in a group that launched intricate rockets on remote farms in Pennsylvania, North Carolina and upstate New York.

McKeown picked up tips from the adults, who were happy to impart their knowledge of rocketry and aerodynamics to the eager boy. "It was a very cool, friendly environment," he says. "It wasn't competitive. People didn't have secret technologies. You went out and launched. They treated me as an equal even though most of them were 20 years older."

His father recalls how he spent the entire summer when he was around 16 building a scale model of a Bomarc supersonic rocket made by Boeing in the '50s and '60s. McKeown spent months making sure he built the 52-pound scale model with five engines.

His methodical building paid off: The rocket climbed 3,500 feet. And it didn't scare anyone when it returned to Earth.

In high school, he transferred to Shady Side Academy. "It was a really great experience," he says.

A natural science student, he took many math classes and an advanced placement computer science class. His father, a research computer scientist at Carnegie Mellon University, says his son had a natural talent for computers and could have followed in his footsteps. "But I think in his heart of hearts he wanted to build things," Dave says.

McKeown also honed his writing and public speaking skills at Shady Side, something that is invaluable today.

"You can be super brilliant and smart, but if you cannot communicate it, it's not very useful. That is why it is so useful to have a well-rounded, liberal arts education. The public speaking and writing classes at Shady Side definitely helped me develop those skills. I write test reports to the customer, which is NASA, on what is going on and what is good and what is bad."

He also played tennis for four years at Shady Side, and when he and his father weren't traveling for rocket club launches, they traveled around the country to tennis tournaments. At a tournament in Atlanta, following his high school graduation, he was ranked 300th in the nation – good enough to play at a Division III school.

While at Ann Arbor, he was awarded a NASA Space Grant Fellowship for developing a novel hybrid rocket engine.

He rounded out his space resumé with two prestigious summer internships – one at Lockheed Martin in Orlando, Fla. in 2006 and the following year at the NASA Jet Propulsion Laboratory in Pasadena, Calif., where he was a Mars Science Laboratory propulsion engineering intern.

After graduation, he was thrilled to get hired at SpaceX, where he has done testing of the Dragon.

"The testing is both the exciting and nervous part," he says. "If you don't set it up perfectly, something could go wrong. But it is really satisfying when you set it up correctly and you see our hard work come to fruition."

He sometimes sits in meetings with Musk, the billionaire entrepreneur who has an integral role in the design process. "He could have just lived on an island and called it quits, but he obviously had passion, not just for SpaceX and Tesla. He is really trying to make a difference."

McKeown also took a lead role during one of the most stressful days at Mission Control at SpaceX – in March 2013, when a valve malfunctioned in the propulsion system of Dragon 4.

The tension mounted in Mission Control as the engineers sent commands to the capsule via the computer. They fixed the problem, enabling a successful mission, but not before hours of troubleshooting.

"It was incredibly stressful," Titus says. "But Matt stayed cool as a cucumber throughout."

McKeown loves the challenge of working at SpaceX. He envisions the day when he can help transport people between planets and send them to Mars.

"When you talk about interplanetary travel, it sounds like a crazy idea at first," McKeown says. "But there are all sorts of things that could make Earth fallible ­– weather or nuclear weapons. Having a backup is a good idea. It's not something that is going to happen overnight. But it could definitely happen."