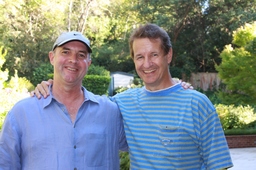 Mark Jackson '74 has always worried about his son Christopher finding his own way in the world. Will he find adulthood isolating and lonely? Will he be safe? Constant worry is part of every parent's job description, but throw autism into the equation, and the sleepless nights rise exponentially.

It was 2009, and Christopher, a nonverbal 18-year-old, was thriving at the renowned Boston Higashi School for children with autism, but would have to leave once he turned 22. Then what?

That matter weighed heavily on Jackson and his wife, Patty, who couldn't find any suitable housing options for him near their home in California. They wouldn't be around forever to take care of Christopher, and they needed a solution for his lifelong care. "It sort of kicked us in the pants," Jackson said. "There was no good fit for him."

At the same time, Jackson's friend, Dr. Carolyn Klebanoff, was battling the same anguish over the future of her daughter, Jane, who also has autism. Given the dramatic increase in childhood autism, Jackson and Klebanoff knew other parents were staring down the same kind of fears. So, frustrated by the lack of options, Jackson and Klebanoff decided to undertake the monumental task of creating a new housing community for young adults with autism.

On Nov. 10, 2012, Sweetwater Spectrum, a residential community for 16 young adults, opened on a picturesque 2.8 acres in the heart of wine country in Sonoma, Calif. Christopher, now 21, will move early next year into a four-bedroom house in an innovative community that boasts an organic farm, fruit orchard, greenhouse, pool, exercise room and art and music rooms among its amenities. His new address will be located just forty-five minutes away from his parents' house in San Anselmo.

"We created a community where the kids can be accepted," said Jackson, president of the board of the nonprofit Sweetwater Spectrum. "The typical group home can be very isolating for someone with autism. They don't make friends easily. Half of our children don't speak. They want to be with their peers, someone who understands them."

Sweetwater's mission is "Life With Purpose." To that end, residents will work in jobs or day programs so they become integrated into the fabric of Sonoma, which has welcomed the project warmly. Volunteer chefs, yoga instructors and other professionals are already signing up to teach classes at Sweetwater.

Jackson and his dedicated Board of Directors know they could not have pulled off such a daunting project alone. One friend in particular stepped up to help. Jackson didn't even have to ask Andy Mathieson '74 to back his newest venture. That's the kind of friend Andy has always been.

In 1966, Mark Jackson and Andy Mathieson arrived at Shady Side Academy as fifth graders. The two new kids were born just 11 days apart — Jackson on Nov. 15, 1956, and Mathieson on Nov. 26. Jackson was shy while Mathieson was outgoing, but the two boys shared a love of sports and hit it off right away.

On the soccer field, Jackson played right wing while Mathieson played left. They also teamed up at doubles tennis. Mathieson recalled how Jackson, a natural athlete, always kicked into high gear when a game was on the line. "We would be down 4-0 in the challenge match, and Mark would decide that was enough," he said. "The next thing, we would be up 6-4. He was extremely talented with everything he did."

Jackson loved math and was especially inspired by his Shady Side calculus teacher Jesse Mase who provided him with a firm foundation for his future business studies and career as a real estate developer."He was an awesome teacher," he said.

Mathieson was grateful for the enduring friendships he forged at Shady Side as well as the dedicated teachers "who were enthusiastic about their subjects and shared this passion with students. I graduated very well prepared for college," he said.

Mathieson and Jackson went on their college tour together, visiting campuses on the East Coast. After graduation, Jackson headed to Middlebury College in Vermont and Mathieson to Yale. They began separate lives, but still made time to visit one other.

Their paths kept crossing. In 1981, Jackson enrolled at the University of California, Berkeley's School of Business. The next year, Mathieson also headed west to attend Stanford University's Graduate School of Business. Even their romantic lives were uncanny parallels. Soon after Mathieson started dating his Stanford classmate, Ann, Jackson began seeing her best friend and roommate, Patty.

As Jackson recalled, Mathieson was nervous about this arrangement. He worried that a breakup might cause tensions within their close-knit group. Fortunately, both pairs eventually married, so they never had to face that predicament.

Even fatherhood arrived with surprising synchronicity. Six months before Christopher was born, the Mathiesons had their first child, Abby. "So much of our lives have been together," Jackson said of Mathieson. "He is like family." In fact, Jackson's current office is located just 50 feet down the hall from his life-long friend's at Fairview Capital Investment Management LLC, the investment advisory firm Mathieson founded.The two families live five minutes apart - the Jacksons in San Anselmo and the Mathiesons in Kentfield.

"He has been there with us from day one with Christopher," Jackson said. "More than anyone else, he saw what we went through."

Mathieson joined the Sweetwater Spectrum AdvisoryBoard and is a member of the fundraising team, which has raised about $8.4 million so far. "Andy has been fantastic," Klebanoff said. "He has been so helpful in giving us his experience in philanthropy. He never missed a meeting. He is such a devoted friend."

Mathieson didn't hesitate to do whatever he could for a cause so dear to his friend. "I greatly admire and respect how they handled the adversities of raising a child with autism," he said of the Jacksons.

The first symptoms of the condition appeared when Christopher turned 2. The once-talkative little boy started withdrawing into his shell. Then he stopped speaking altogether. He was diagnosed with autism, a developmental disorder that at the time affected only one in 3,000 children. Today it occurs in one out of 88 and the odds jump to a staggering one in 55 boys.

Though Christopher attended classes for the first few years of elementary school, he later switched to home-schooling so therapists could give him individual attention. Jackson, who worked as a real estate developer then, would watch with amazement as his son put together a 200-piece jigsaw puzzle in a few minutes, sometimes mixing up two puzzles to give himself a challenge. "I would pay a lot of money to spend one day in my child's brain," he said, a common wish of parents whose children have autism.

Christopher was spared the ridicule that many children with his condition experience in middle and high school. A new national study of teens found that nearly half of those affected by autism have been bullied - three times the rate for all students.

While home-schooling shielded Christopher from mistreatment, it did not provide enough structure for such an active and impulsive child. As he grew older, he frequently alarmed his parents by running away from home, sometimes jumping over a neighbor's eight-foot fence to escape.

Jackson knew that Christopher needed more intensive care. That is when he and Patty learned about the Boston Higashi School, which attracts students with autism from around the world. Christopher's first day of class there was Sept. 11, 2001, the day the world changed forever.

After that unsettling start, Jackson struggled with the reality of living across the country from his child."It was horrible for the first two years," he said. But he eventually realized Higashi was the best place for Christopher, who thrived in the school's structured environment. The arrangement also allowed the couple to devote more attention to their younger son, Jake. "Though they rarely complain, there is no question that the sibling of someone with autism gets the short end of the stick," Jackson said.

The years went by, and in 2009, the Jacksons received a phone call from a state official who wanted to discuss Christopher's future housing options. The person felt a group home would not be a good fit because of the boy's propensity to run away. There was no other known option.

Many parents are caught off-guard as their children with autism approach young adulthood. "They are so busy," Jackson explained. "It takes a lot of effort dealing with issues around therapy and school and just getting to sleep. Often, they don't wake up until the child is 18, and they realize they have to deal with it."

Both Jackson and Klebanoff were staring down deadlines. They would need to come up with better options by the time their children graduated from their respective programs. .

"We can do it," Klebanoff told Jackson. But they didn't know yet what 'it' would be.

It started out as a real estate deal. Within four months, Jackson, who had retired as a real estate developer in 2003, found the tract of land, owned by the city of Sonoma. He jumped through the necessary hoops to re-zone the property and comply with environmental regulations. "He put together a $10 million real estate project in a northern California community," Mathieson said. "That requires an extreme amount of skill, expertise and perseverance."

With the land deal nearing completion, the team set about designing a community for young adults with autism. Jackson consulted with researchers at Arizona State University's Stardust School of Design about how to minimize harsh sounds, lights and smells that could overwhelm residents with autism.

They took all the architects' recommendations to heart. "We have a radiant heating system, which is very quiet," Jackson said. "The houses are set back from the street and there is special sound insulation. We have natural light with very few fluorescent bulbs."

Sweetwater Spectrum was built with high-impact drywall, because a few residents have a tendency to punch holes in the walls. "Every stick, brick and nail was designed for our children's behavior," Jackson said. When the consultants from Arizona State visited Sweetwater Spectrum recently, they were thrilled. "They were completely blown away that we had taken their research to heart," Jackson said.

Sweetwater Spectrum was also designed with family gatherings in mind. The grounds include community spaces for parties and barbecues. "Families need an outlet," Jackson said. "It is nice to have someone else who can understand autism. We know some families who will not admit to their friends that they have a child with autism."

Jackson and Klebanoff also hired an executive director to run the day-to-day operations of Sweetwater Spectrum.

Jackson hopes to help other parents replicate the basics of the community as a growing number reach out to him. "Autism has gone from a blip to the predominant development disorder," he said. "It is really frightening. Eighty-five percent of those who are diagnosed are under age 22. The need for housing hasn't even kicked in yet. Ten years from now, the need for housing will be off the charts."

Mathieson calls his longtime friend "a national expert on putting projects like this together. Mark is becoming a resource for lots of parents and communities who want to do the same thing. He is contacted daily."

The calls come from all over the United States, even the world. "I got a phone call from Saudi Arabia yesterday and one from Maine the day before," Jackson said." They want to know how I am going about doing it."

For Jackson's part, Sweetwater Spectrum has given him a sense of purpose. "I liked buying real estate for a living. I truly love doing this," he said. "I sleep better at night. I wake up enthusiastic about Christopher's future."

Christopher, who has seen photos of the community he will be moving into, also seems enthusiastic about the coming change. "He packs his suitcase every day," his father said. "He knows something is up."