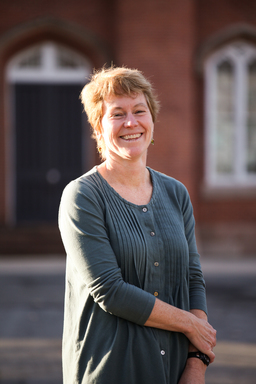 Some college deans spend all day holed up in their offices. Not Margaret Hazlett.

On any given day, she's out on the lush campus of Franklin & Marshall (F&M) College in Lancaster, Pa., hashing out party guidelines with fraternities, cheering on the field hockey team and nudging student government leaders toward a smoke-free campus.

For Hazlett, dean of the college, the classroom and campus life of a private institution are intertwined, helping a student grow both academically and socially. "I think students who have gone through the process of getting into college have had so much pressure," she said. "It's real pressure, but it is also the pressure high performers put on themselves."

She reminds high-achieving students to take time out to enjoy themselves. "Find the fun in living," she will tell them. "Are you hanging out with the group of friends you want to be with? Are you joining the finance club just to get an internship at Morgan Stanley, or are you doing what you really enjoy?"

"College is all about taking risks," she said, but then added with a laugh, "But not too crazy of a risk."

Hazlett discovered the importance of a well-rounded campus experience at Shady Side Academy, where she attended the Senior School. Not only did she excel academically, she became captain of the field hockey team and a student government leader. Her teachers nurtured her both inside and outside the classroom. She remembers feeling intimidated during the biology class of Bill Sayles, who would call on students after drawing names from a box of index cards. Please don't pick me, she would think, squirming. Biology wasn't her best subject. But come Monday, the demanding teacher would compliment her on her play during the weekend field hockey game. She would beam. "It was so supportive. That made such a difference for me."

Hazlett fosters that same sense of community as dean of F&M, a small liberal arts college. "I love the full community - the curricular and co-curricular and how they intertwine so students experience them seamlessly. It blurs the lines of what a classroom is."

As dean, Hazlett oversees everything from discipline and Greek life to athletics and mental health issues. She works in student life at a time when college students nationwide are reporting increased levels of depression and anxiety. "There are waiting lists at many college counseling centers," she said. "You have more and more students on antidepressants and anxiety medication. Ten or 15 years ago, they wouldn't be able to be in residence halls. That puts extra pressure on health and counseling services."

Rather than just reacting to crises, Hazlett tries to prevent problems. She recently met with a group of fraternity brothers about hosting safe parties and reducing their legal liability. "These are young men with significant leadership roles and a lot of responsibility on their shoulders," she said. "In the media, they are reading about sexual assaults at fraternities, Amherst College getting rid of their fraternities. Our goal is to have a healthy fraternity system."

She also met with student leaders of the college housing system and asked them to consider different party options. "Our campus is more diverse," she said. "There are a lot of cultures that don't socialize with alcohol."

Wellness is another priority of Hazlett's. With a growing number of campuses going smoke-free, she presented the idea to Mark Harmon-Vaught, student government president, so that he could bring it to the next student forum. "She could have done it with a snap of her fingers. But she engages with students and shares responsibilities," he said. "It's not the top-down approach you find at some schools."

Though she has only been at F&M one year, Hazlett is a familiar face on campus. "I see her in the morning for bagel breakfast at 8 a.m. and in the evenings for basketball games," Harmon-Vaught said.

Not all deans are so visible on college campuses. "She could easily lock herself in her office and supervise her department heads," said J. Samuel Houser, vice president for strategic initiatives and chief of staff at F&M. "It would be easy to do that, but she is among the students."

When it comes to discipline, she is a rare mix of compassionate and no-nonsense pragmatism. "Some people are good disciplinarians," Houser said. "Other people are good therapists. Very few can do both. She can be very empathetic to students' needs. But she has no problem disciplining the students and referring them to help so the community as a whole remains strong. She is very ethical."

Those ethics were instilled in her as the youngest of three daughters in a lively family in Fox Chapel. Her father, Bob Hazlett '42, was an Ivy-League-educated lawyer with a great sense of humor. He delighted in his daughters' achievements. Hazlett found a compassionate role model in her mother, Ann, a social worker at the Women's Center and Shelter of Greater Pittsburgh. "She was a leader in the understanding of domestic violence, pre-O.J. Simpson," Hazlett said. She also was one of the few mothers Hazlett knew working outside the home back then.

The Hazletts raised their daughters to be individuals. "All three of them went to different high schools," said Lisa Fisher '84, Hazlett's classmate and director of database and donor services at Shady Side Academy.

Hazlett transferred to Shady Side Academy in high school and instantly felt a sense of community. "The faculty would come to your bake sale and your school plays," she said. "That is what got me interested in student life."

Hazlett was a standout in athletics and always gravitated toward the positions no one else would play. In field hockey, she was goalie. In swimming, she did endurance events. In softball, she played catcher, a position she didn't like. "She was never one for immediate gratification," said friend and classmate Sandra Sauereisen '84. "She always went the distance."

On campus, she was so respected that she was voted to the three-person student government board both her junior and senior years. "She wasn't the most popular student, but everyone thought they could trust her. She was kind, accepting and open to everybody," Sauereisen said. "If you were to ask anyone who is the fairest person, they would say, 'Margaret Hazlett.'"

As a student leader, she served a stint on the admissions committee, reading applications and making recommendations in confidence. She developed close relationships with administrators, including Walter Jones, the late director of admissions. I could see myself doing this type of work, she thought.

Her athletic, leadership and academic abilities were honored during Prize Day, when Hazlett took the stage for award after award. "We were jokingly rolling our eyes, 'Of course, it is Margaret,'" Fisher said. "But no one was jealous. Everyone knew she deserved every single award."

After graduation, Hazlett attended Princeton University, an intimidating transition at first. But she said Shady Side Academy gave her the confidence to speak up in class and see professors during office hours. After graduating with a B.A. in art history, she taught English in Thailand. The 23-year-old stepped off the plane in Bangkok without speaking a word of Thai or knowing a soul. She had no idea where to live. But always resourceful, she made her way to the U.S. Embassy and found real estate resources so she could find an apartment.

Teaching overseas broadened her world view. "It was the best experience," she said. She also taught in Japan for a year through the Princeton in Asia program. Upon returning to the United States, she worked in residential life at Princeton, overseeing a resident assistant program, and then served as executive director of Princeton in Asia. As much as she liked that work, she knew her ultimate goal was to be director of a private secondary school or a college dean. So she earned a master's in education from Harvard University. "To be at Harvard was phenomenal," she said. "I soaked it up."

In the mid-1990s, she taught for two years at St. Stephen's & St. Agnes School in Alexandria, Va., a private school that reminded her of Shady Side. "I was director of the summer program, taught 10th grade medieval history, coached the swim team — the whole nine yards of being at an independent school," she said. "I loved the community."

But she also missed working with college students. In 1997, she moved to Bowdoin College in Maine, where she became senior associate dean of student affairs. She liked the challenge of working with a small liberal arts school that was going through a challenge. When Hazlett arrived, Bowdoin had just eliminated its fraternity system and was transitioning from a traditional New England college to a much more diverse school where 30 percent of the students are of color. "It was an exciting change," she said.

She stayed there until 2013, then moved back to Pennsylvania to take the job at F&M. She also plans to help F&M become more diverse racially and to expand geographically beyond the Mid-Atlantic states.

She loves helping students develop as people during this critical juncture in their lives, pushing themselves outside of their comfort zones. "You watch someone come in and think they are going to be a computer science major, and then they leave with a Teach for America internship."

At a time when students can expect multiple career changes, she believes a liberal arts education provides a solid foundation for success. "Gone are the days when you are going to work for McGraw-Hill for 26 years," she said. "I was an art history major. Look at what I am doing. I was taught excellent writing skills and quantitative reasoning skills at Shady Side. Those are the skills that allow students to be nimble."

She brings her children (ages 9 and 11) to F&M football games and other events. "My kids love to go. It is a great place to raise kids. I have a babysitting list of 2,400 students."

Hazlett is always thinking about campus life. Sauereisen remembers how she talked her into coming to Central Pennsylvania to run the Bird-in-Hand Half Marathon in September. The weather was steamy hot, and immediately after crossing the finishing line, Sauereisen wanted to rest.

Not Hazlett. "I have to run to a college event," she told her friend, before rushing from the finish line, taking a quick shower and heading back to campus to check in on a football game and an outdoor concert.