Joyce Fu '99: With An Unmatched Passion For Sports, Law and Family, There Is No Off-Season 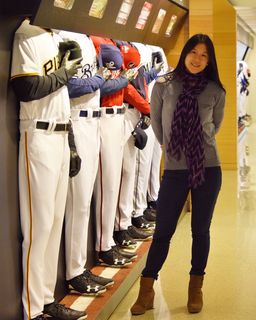 As the Tampa Bay Rays warmed up at the Estadio Latinoamericano in Havana, Joyce Fu '99 knew history was unfolding in front of her. Behind home plate, President Barack Obama took his seat next to Cuban President Raul Castro. Jimmy Buffett started snapping photos to capture the moment – for the first time in 88 years, a sitting U.S. president was in Cuba.

It was a surreal moment – a music legend, starstruck by world leaders.

The home crowd went wild as the Cuban National Team took the field. Energy levels peaked when Antonio Castro walked past the stands, "Tony!" fans called out to Fidel's son and vice president of the Cuban Baseball Federation.

Fu, who works in marketing and international business development for Major League Baseball, had worked 100-plus hour weeks to make sure this historic game on March 22, 2016, came together. High-energy and scrupulously organized, she firmed up hotel reservations and arranged charter flights for players, staff and guests. She made sure the details were in order for the welcoming gala, where Buffett performed. "Logistically it was kind of crazy but it was such an amazing experience," she said.

"The game was very emotional for everyone. It signified a bridge between two countries and showed how the power of sport can make people forget about their differences and come together."

Fu has promoted baseball all over the world, traveling to places like Australia, China and Latin America. The outreach work is just one way she has combined her legal and business background with her love of sports -- a passion that was nurtured during her years as a standout athlete at Shady Side Academy.

"Sports have always been a big part of my life. Going into law school, I thought maybe I could marry my two interests. It's hard to break into the business."

But then again, Fu has never backed away from a challenge – especially not an athletic one.

As the daughter of an orthopedic surgeon and sports medicine pioneer, Fu spent her childhood immersed in all things athletic. Dr. Freddie Fu treated athletes ranging from professional football players to recreational marathon runners, helping them recover from their injuries and get back in the game. In recognition of his life's work, UPMC has renamed the medical building within its Rooney Sports Complex known as the Freddie Fu Sports Medicine Center.

Fu inherited her father's hard-driving and razor-focused personality, and it made her a force in field hockey and lacrosse. "She's scrappy," her father said. "She always goes for it."

Hilda Pang Fu, Joyce's mother, remembers when her daughter was a young lacrosse player, and her team was facing a brick wall of a goalie. Some of the girls were intimidated, but not Joyce. "She hasn't seen me yet," she told her mother.

("That's so embarrassing," Fu said as her mother recounted the memory.)

"Joyce was Joyce from day one. She was very assertive. I love that in a girl," her mother said. "We never had to push her."

Once she enrolled at Shady Side in high school, Fu flourished both athletically and academically. As a left wing on the field hockey team, she was one of the high scorers on a team that won WPIAL Championships several consecutive years. She played lacrosse, her favorite sport, with the same gusto.

"I loved team sports. I was really close with my teammates and we had great coaching. I felt lucky to be part of a school that valued playing three sports. Kids today are so specialized in one sport."

Team sports came naturally to her, but swimming was more of a struggle, and she found the meets nerve-wracking. Still, under the guidance of coach John Landreth, she threw herself into the challenge of improving her times.

"I was always in the slow lane during swim practice but was weirdly decent at the backstroke," she said. She improved so much that she became part of a 200-medley relay at team at states along with Liz Daniels '00, McKenzie Craig '01 and Gretchen Benford '99.

"She was unbelievable. She started swimming new in high school, and she just crushed it," said friend and former classmate Jen Portland '99. "It's hard to come into a sport late and make an impact. "

"She's exactly the opposite of a procrastinator. She attacks everything and gets it done with grace. She was a role model for people her own age."

A natural leader, Fu was named captain of the field hockey, lacrosse and swimming teams her senior year. By graduation, she had 10 varsity letters – one from track her freshman year, and letters in all three sports every year after that.

Fu wasn't only athletic. She was artistic, too, developing as a photographer with the help of teacher, Tony Goodwin. "She would always come up with ideas like, "Let's go to Zelienople and take pictures,'" said her friend Andrew Seguin '99. "She appreciated the randomness of life and was up for anything." She immersed herself in portraiture, capturing unexpected moments.

As a senior, she began dating her future husband, Chad Martin '98, who had graduated the year before. He said he was captivated by her energy. "She was the captain of everything. She was super well-rounded and high-energy. Everything needs to be done yesterday. She cannot sit through a movie."

Fu went on to Dartmouth College, where she graduated with a Bachelor of Arts degree in studio art and sociology. As a lark, she played rugby as a club sport. Of course, she didn't play the rough-and-tumble game halfheartedly.

Before law school, she landed an internship with the Pittsburgh Steelers. She spent the summer rotating through different departments, working in the ticketing office and briefly filling in for owner Dan Rooney's assistant. "He was so nice," she said.

His son, Art Rooney II, a partner at a law firm, invited Fu to spend a day in his office so she could learn about the legal side of sports. "Sometimes people say, 'I'm interested in law and sports', but it's not so glamorous. It's really about business. It's not like you are hanging out with the players all day."

As a law student, she gained further experience as a legal intern with the National Football League. Upon graduation from Columbia Law School, she landed a coveted job as in-house counsel with the New York Mets. She did everything from negotiate contracts with ticket takers and cleaners to legal work for an academy in the Dominican Republic. When Billy Joel played Shea Stadium, she worked on the legal agreement with Live Nation. During that period, she and Chad got married and started a family, and she took two years off to be at home with her children.

In 2013, she returned to Major League Baseball, this time in a non-legal capacity. MLB brought her on as part of a diversity task force to study the decline of African-American participation in baseball. After that, she developed a league-wide domestic violence and sexual assault policy.

Two years later, she was offered a job in marketing and international business development. Now the mother of three children, she negotiated for a part-time schedule that lets her leave the office early three days a week. "I want to be with my three kids. Family is very important to me."

Fu has found the marketing aspect of the sports business a refreshing change from the more cut-and-dried legal work. As part of a study on school-based baseball programs in China, MLB sent her there to observe students as they were introduced to the game. "We partner with some schools, providing curriculum and coaches." That, in turn, builds a broader audience for baseball, because people tend to watch the sports they know how to play.

She also traveled to Sydney, Australia, for the World Baseball Classic Qualifier. In 2017, she went to Seoul, Korea, to see the main tournament. "It's humbling. In the United States, the MLB brand goes a long way. But in other countries, sometimes it is popular and sometimes it is not."

Her trips to baseball stadiums around the world have showed her the different ways fans react to the game. "In the United States, fans are quiet. In Korea, Taiwan, Japan, there are noisy cheering sections. People beat foam sticks together. It is a lot of fun in the crowds."

Fu and her husband now live in New York City, not far from many of their former classmates. When they get together, old friends marvel at Fu's energy, still as robust as it was during her high school days. Seguin said, "You can always count on Joyce doing 800 things at once. But it's never in a frantic way. It's a determined way to get things done. She is the most dynamic person I know." 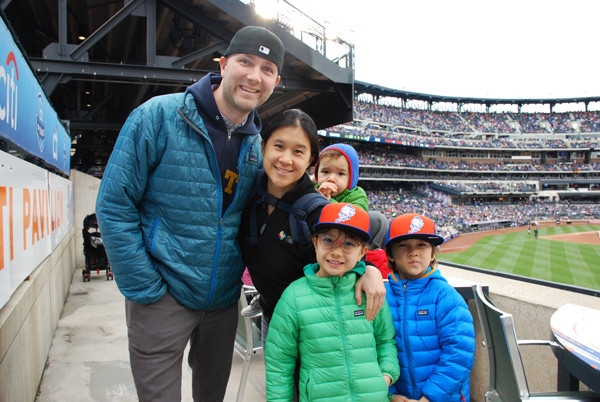 But for all of her determination to check things off her to-do list, she is always kind and open to other people, her husband said. "She is a natural networker. She will talk to a waiter, and by the time the meal is done, she is trying to connect him to someone so their kid can get an internship."

These days she spends much of her time chauffeuring her three athletic children to hockey, diving and other practices. On occasion, she jumps in to play with them.

One evening after work, dressed in business casual clothes, Fu brought her 9-year-old daughter to diving practice. As the kids were warming up on a trampoline, Fu hopped up and did a backflip, to the astonishment of the coaches. They were impressed by her skill but nervous about liability. As Chad recalls, they didn't encourage her to do it again.

"She does stuff all the time that no one would expect from a mom in New York City," he said. One sports risk she isn't keen on is skateboarding, but she has been known to try it rather than miss out on a fun outing with her husband and kids.

But the fearless athlete came back in time for surf lessons, another activity the adventurous family has taken up together. "I am a beginner, but I love it. It's never too late to learn something new."

Especially when it comes to Joyce Fu and sports.