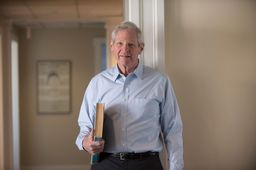 After graduation from Shady Side Academy – and before heading off to Princeton University – John Duff spent the summer of 1959 almost suspended in time. He and four good friends filled their days with tennis, warm memories from high school and anticipation of what was to come.

But the close friends made some of their best memories that summer in an unexpected place. Every Wednesday evening, they returned to Shady Side Academy to sit with English teacher John Hightower in the Senior School library, where they discussed the greats of literature – Animal Farm, The Great Gatsby, Hamlet...

It wasn't like summer school – it was the opposite. John and his friends were so enthralled by Hightower's senior literature class, they had asked their parents to pay for him to hold a weekly discussion class for them over the summer.

"A whole world had suddenly opened up to us – the world of literature," Duff said of Hightower's course during the school year. "We had just scratched the surface. We were leaving, but we wanted to keep it going. He was a marvelous teacher, and he ignited a spark in us."

That spark followed Duff to Princeton, where he received a B.A. in history, and stayed with him through Yale Law School. That education was the springboard for a career as a partner at Reed Smith, a law firm based in Pittsburgh, and deputy general and senior vice president for the Export-Import Bank in Washington, D.C. Then he joined Bechtel Investments in San Francisco and nine years later helped to create a private equity and venture capital firm in the Bay Area.

Throughout each of his successful careers, he continues to draw on the passion he first felt in the library as he devotes himself to both learning and leadership, hoping to ignite a similar spark in youth today. He serves on the Shady Side Academy Board of Visitors, and he has endowed a chair at Yale Law School – occupied by Amy Chua, best known for her book, Battle Hymn of the Tiger Mother, a book on tough parenting that has become a cultural touchstone. He also has helped inner-city children go to college by backing the KIPP DC public charter school program and done work on behalf of adoption.

"He is passionately interested in education," said his classmate John Margolis '59, professor emeritus of English and dean emeritus of Northwestern University in Qatar. "He has been an educator and supporter of education throughout his career, with commitments ranging from the Ivy League to inner-city schools."

Duff explains this long-time commitment to quality education: his experience at Shady Side was "a great gift. I wanted to pay it back."

He transferred to Shady Side in high school, and on his first day, he made an impression for all the wrong reasons. Dressed in a sweater and tie, he missed a crucial part of the required dress code: the blazer. "I just wanted to slide in there and hope no one would notice me, but I was well-known to everyone by the first day," he said with a laugh. "It's a good lesson for life, right? Nothing builds character like a little embarrassment that breeds humility."

His first test was also embarrassing. A good student at his former parochial school, he got a D+ on his first math quiz. "And that was a wake-up call big-time – painful but necessary. I had to up my game. The teachers were all rigorous. It was a high bar, and it was good."

He soon made friends that have lasted a lifetime. One day his freshman year as he sat in study hall, Margolis jabbed him with a piece of paper that said, "Do you believe in capital punishment?"

Duff had no idea what it was, let alone whether he believed in it. (Margolis quips that his 75-year-old self is upset with his 15-year-old self for violating study hall rules.)

That broke the ice, and the two became fast friends. They worked together at the Shady Side News, where Margolis was editor and Duff was second-in-command. That first experience in publishing led Duff to become editor of The Egerian, the school literary journal. He still has copies of that issue. He also played basketball, his first athletic love, as well as tennis and soccer.

Once at Princeton, Duff started out as an English major, but he switched majors when he found himself fascinated by American history. He also penned some articles for The Daily Princetonian and the Princeton Alumni Weekly.

While he expanded his own mind, he was interested in teaching others, and in his senior year in college he served as an intern to an American history course at The Lawrenceville School, a private high school. It was his first of many teaching opportunities.

He contemplated further studies in history at graduate school, but the pull of law school ran strong in him, as it did in his family. His father, grandfather and uncles were lawyers.

But Duff had yet another reason to study law. Like so many young men of his generation, John F. Kennedy inspired him to go into politics.

"Kennedy was electrifying," he said. "Law school was a vehicle for politics. He attracted young people at the time much the way Obama did."

In fact, when Kennedy was assassinated on Nov. 22, 1963, Duff and two of his classmates traveled to Washington, D.C., to attend his funeral.

Then he did a stint in the U.S. Marine Corps Reserves, becoming a lance corporal before transferring to the Navy JAG Corps (lawyers).

He returned to Pittsburgh and became a partner at the Reed Smith law firm. He tested the waters of local politics, but ultimately decided not to run. "I dabbled but I never got very close," he said.

Duff traded his dreams of politics for a successful career as a lawyer and teacher. The young lawyer became an adjunct professor at Duquesne University Law School, teaching a course on debtor's rights and bankruptcy. "I was one page ahead of the students for the first year," he said. "It was all-consuming. I really liked teaching. The students were great."

And unlike other disciplines where the professor seeks one correct answer, a law professor can challenge his students by throwing questions back on them. He also was involved in the community by serving on the board of the Neighborhood Legal Services Corporation.

In 1977, Duff got the call that would change the course of his career.

It was a friend from law school calling to tell him about an open position at the Export-Import Bank of the United States (EXIM), a government agency that facilitates the export of U.S. goods and services by providing loans and insurance with the mission of supporting American jobs. He started out as deputy general counsel and was promoted to senior vice president.

The new work fascinated him. Once again, the passionate teacher found an outlet as he stood in front of a classroom and imparted his knowledge – this time to the students of Georgetown Law chool who took an international law and economics class he helped to teach.

His work at EXIM made him realize that he preferred the business side of things to the legal side.

But when he left EXIM in 1982, he found resistance from employers who wanted to hire him only for his legal expertise. "When I went out to the marketplace to try to get hired as a business guy, it was pretty clear that the only person that saw me that way was me."

When he went to work for Bechtel Investments, the investment subsidiary of a large San Francisco-based engineering and construction company, as its chief counsel, he told them he would like to focus on business, and they promised that if things worked out he could make the switch after spending several years on the legal side. After a few years he made the switch and started buying struggling companies and helping to restructure them into bigger and stronger companies as part of Bechtel's newly formed private equity group.

In San Francisco, he did another teaching gig – a corporate finance class for students at Golden Gate University.

In 1991, he and partners started Duff Ackerman & Goodrich, their own private equity firm. They bought companies, restructured them and sold them. For instance, they bought radio stations, put them under new leadership and sold them to a bigger radio company. They did the same for cable and broadcast TV stations, wireless companies and even a company that made motorcycle accessories.

For all of his success, Duff never forgot education – or the kids who seemed to be left behind by the system.

Before deciding how to invest his time and resources, Duff did his research about the best inroads that make the biggest impact for these kids. In the end, he said, "All roads led to KIPP." It's the Knowledge Is Power Program, a nonprofit network of charter public schools that support educationally underserved students who aim to achieve in higher education.

Duff, who lives in D.C., works with KIPP DC as a board member and chairman of the finance committee. He finds great reward when he sees children, all of whom come from low-income families, often with a single parent, beat the odds and go to college. "For the boys, the alternative is often going out into the neighborhoods and getting into trouble, often leading to jail and having a short life span."

"The DC KIPPsters have all gone on to college, community college or the military. When you see kids 3 feet tall saying they are the Class of 2025 – that builds expectations of college. It makes such a huge difference on what they can accomplish."

An adoptive father, he also is very active with The Barker Adoption Foundation, a nonprofit adoption agency that provides services and counseling and helps place children into families.

His enduring passion for quality education brings Duff back to where he first caught the spark – Shady Side Academy. In 2002, he was asked to become a founding member of the Board of Visitors. For alumni who no longer live in the Pittsburgh area, the Board of Visitors ensures they continue to be engaged with the school.

After crossing paths several times, in 2002 Kramer asked Duff to join the new advisory board, and from the start he has been a great asset. "He listens to other people's thoughts before he expresses his own," he said. "That's an attribute that all of us can admire." He also hosts SSA alumni events at his D.C. home.

On a personal level, Duff has kept friends from his high school days, and visits and vacations with them. "We are lifelong friends. We remain very close," said Dr. Carl Srodes '59, a member of that summertime book club.

Duff still recalls the summer evenings he spent in the library with his four pals. Time picked up and moved along, but after 57 years and four separate paths and lives, the bonds they formed over Fitzgerald, Shakespeare and their school remain.