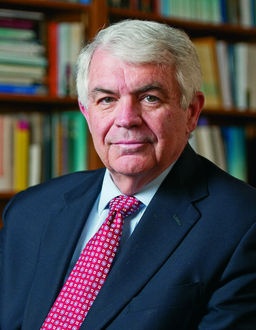 John B. Taylor is a towering figure in the field of macroeconomics, the inventor of the Taylor Rule of monetary policy, a serious advisor to American presidents and central banks worldwide.

But he's not above pulling a prank.

Consider how he once interrupted his Economics 1 lecture at Stanford University. "Why aren't you taking notes?" he called out to a young woman sitting in the front of the vast lecture hall.

Startled, the other students looked up from their notebooks. "I don't go to school here," the woman said. "I am visiting from Princeton."

"This is Stanford. You can't be at an economics class at Stanford. You should go," he said sternly, as the eyes of his students widened.

The interloper looked down, crestfallen. As she stood up to leave, Taylor called out, "Let's vote. Should we let her stay?"

By this point the students were whispering among themselves. What was going on? Why was the ordinarily genial professor holding a humiliating vote on whether to oust a student?

Then Taylor let his class in on a secret. The young lady was indeed a Princeton student, but she also happened to be his daughter, Jennifer.

He had used a planted audience member --- a maneuver straight out of a standup comic's handbook -- as a launching point to discuss the economic concept of barriers to trade or keeping goods out. In that case, the excluded good was education.

While some people dismiss economics as the "dismal science," it is anything but boring in the hands of Taylor, a renowned economist who earns his living making complicated concepts accessible to green freshmen, savvy Federal Reserve members and U.S. presidents.

"John is one of the giants of the field today," said Thomas Simpson, an economist and former member of the staff of the board of governors of the Federal Reserve System. In fact, Simpson mentioned Taylor in the same breath as Nobel Prize-winning economists Milton Friedman and Edmund Phelps.

With the economy battered by the subprime mortgage crisis, Taylor, who is the Mary and Robert Raymond Professor of Economics at Stanford and a senior fellow at the Hoover Institute, has been a regular on the talk-show circuit. In appearances on CNBC, Fox News and other cable networks, he has been discussing his recent books Getting Off Track: How Government Actions and Interventions Caused, Prolonged, and Worsened the Financial Crisis and First Principles: Five Keys to Restoring America's Prosperity.

Taylor argues that the government has made things worse because it has gone astray of its founding principles and has not followed the predictable rules that kept the economy humming along in 1980s and 1990s.

"Predictable policy," Taylor said, "means tax rates are clear to people, you get a sense of what monetary policy is going to be. And then people don't have to keep guessing. Right now there's so much of the tax code that is being changed every year, payroll tax is supposed to be changed and the income tax. And that causes uncertainty. If we just get it back to a more stable policy, it would help the economy a lot."

An economist today is a lot like a weatherman in the middle of a huge snowstorm. But unlike the meteorologist who gets jazzed pointing at all the cold fronts on the weather map, Taylor gets no joy in analyzing or explaining the nation's economic ills. "I find it more disappointing and frustrating. You say, 'Gee, if they just followed the policies that were working pretty well in the 1980s and 1990s.'"

His distress over the federal government's rapid expansion of the national debt was evident during another recent family skit in his classroom. This time he brought in his grandchildren – a newborn and a two-year-old – in front of his students, who oohed and ahhed. "They are the ones who are going to suffer from the debt," he told them. It was another memorable teaching moment from a world-famous economist.

In economic circles, Taylor is most famous as the father of the Taylor Rule, which provides central banks such as the Federal Reserve with guidelines for setting short-term interest rates, based on inflation and unemployment. He devised an algebraic formula that central banks can use to raise the interest rate by a certain amount when inflation picks up and cut it by a specified amount to spur the economy during a recession.

He had spent years devising the formula so central banks could act on a set rule rather than on the discretion of its members. When he presented his idea in 1992, Taylor had no idea it would create such a sensation in the world of economics. But as soon he heard Taylor's presentation, Allan Meltzer, a renowned economist at Carnegie Mellon University, knew Taylor was on to something big. "It is a simple believable rule that works," said Meltzer. "He is a formidably good statistician."

Others listened too. The Federal Reserve Board asked Taylor to come in and make a presentation. Federal Reserve district banks in Cleveland and San Francisco also sought his advice.

His rule's influence spread internationally. The Bank of England and the Bank of Japan asked Taylor to consult on their policies. It was thrilling. And as his rule spread around the world, it was dubbed "The Taylor Rule." "He's a pretty modest guy," his wife Allyn said. "He would have never named it that."

Economics is often thought of as a highly analytical field. And it does require excellent math and statistics skills. But Taylor said a skilled economist uses both highly technical skills as well as softer skills such as history, politics and writing.

"Economics is this very interesting combination of techie and fuzzy," he said.

Taylor said he received a well-rounded education as a five-day boarder at Shady Side Academy, which he attended from freshman year through graduation. He said the foundation Shady Side gave him in writing and the sciences was "just extraordinary."

Taylor recalled how some friends in college once asked to borrow his notes in preparation for a test, and he said, "Sure, go ahead." When a friend returned the notes the night before the test, Taylor recalled with a laugh, he said, "Boy, these were really terrific. We memorized all the 'WGADs.'"

After receiving his Ph.D. in economics at Stanford in 1973, Taylor became a professor at Columbia University. He was fascinated by the academic discipline of economics, but he wanted to apply it to the federal government's monetary and tax policy. In 1976, he landed a job as part of the Council of Economic Advisers at the White House under President Ford, the first of many public service appointments.

"Alan Greenspan was the chairman of the Council of Economic Advisers then, and I got to know to him quite well there. Ford lost the election, and Greenspan went back to New York, so I became very close with him at the time. It was a tough time in the economy."

That time with President Ford's administration whetted Taylor's appetite for public policy. He went on to serve on the Council of Economic Advisers under President Carter in 1977, and under President George H.W. Bush from 1989 to 1991.

Taylor also intersected with history during the presidential campaigns of George W. Bush, Bob Dole and John McCain. He served as the candidates' economic advisor as they developed policies and presented them to the voting public. "One of the under-appreciated and fascinating parts of public policy is working on presidential campaigns," he said. "It's maybe more important than actually working in an administration because a lot of policy decisions get decided in the campaign."

Taylor called the 2000 campaign of George W. Bush "one of the best campaigns I've seen. He chose his economic plan very early, and he invited people like me to come down to Texas and go over it."

In contrast, the 2008 campaign of Senator John McCain was derailed, in his view, by the severe financial crisis. "You are running and you're the same party as the incumbent and the economy is falling apart under the incumbent's watch."

Taylor advised McCain not to overreact but to respond to the crisis. Instead, McCain suspended his campaign and announced he would return to Washington to work on bailout negotiations. "That probably hurt him," Taylor said. "But the main thing was the crisis. There wasn't much you could do about that."

In 2001, Taylor was named U.S. Treasury Under Secretary for International Affairs, a post he held until 2005. He was responsible for U.S. policies in international finance such as currency markets, foreign investment and international debt.

In anticipation of the allied invasion of Iraq in 2003, Taylor and his staff devised a plan to create a new currency to replace the Saddam Dinar, which was an easily counterfeitable currency with the dictator's face on it. "I set up a new central bank," he said. "The central bank that they had before was essentially just a way for Saddam Hussein to give favors to his friends."

The new currency, the Iraqi Dinar, rolled off printing plants around the world and was flown into Iraq, stuffed into the cargo holds of 27 747s. "It was a heady experience," said Taylor, who went to Iraq three times.

For all of his accomplishments, Taylor has always been respectful of the people who worked under him. Research assistants, fresh out of college, would meet with him in his impressive office overlooking the White House. "When they spoke, John listened," said former Federal Reserve staff member Simpson.

Taylor, though a high-powered U.S. official, also never condescended to the new cabinet officials in Iraq, the minister of finance and others who were just learning their jobs, Simpson said, recalling his trips to Iraq with Taylor.

Or as George Shultz, former U.S. secretary of state under Ronald Reagan and Taylor's colleague at the Hoover Institution, put it, "John treats everyone the same, whether he is talking to the Speaker of the House or the president or a graduate student or someone cutting his grass."

Shultz also said that Taylor is a natural for the high-stakes world of public policy, "He doesn't panic. When there is a crisis, he isn't going to lose his head."

Taylor's wife, Allyn, calls public policy "his extracurricular activity." But whether he is counseling a president or lecturing in front of a class or just hanging out at home, Taylor sees the world in terms of well-thought-out economic principles. If a family member is going skiing, Taylor will talk about maximizing the return of the day by taking the lift early. If he's going to the grocery store, he will talk about opportunity cost. To John B. Taylor, economics is everywhere he looks.

by Cristina Rouvalis | Photography by Linda A. Cicero
Published in the Summer 2012 issue of Shady Side Academy Magazine