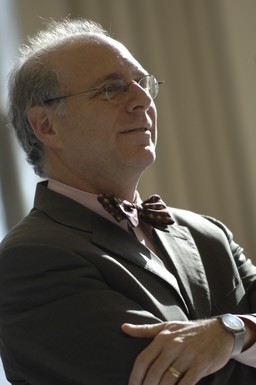 Jim Berkman has never been one to take homework lightly. Not at Shady Side Academy. Not at Harvard College. Not at Oxford University.

As the head of school of Boston University Academy, he assigns himself homework for the first two weeks of each fall term. He learns the name of every incoming student at the small private high school located on the BU campus.

After confusing a Jessica with an Erica a time or two and getting stumped by identical twins, he soon commits all the names to memory. Homework completed. But like any good overachiever, Berkman doesn't stop there. He learns about his students' siblings, parents, pets and academic passions in a school where the students proudly wear buttons that say, "Embrace your inner geek."

In his 31 years as an educator at five independent schools, Berkman has always worked extra hard to get to know his students. His aim always is to create a close-knit community on his campus - the same kind of collegiality that helped him flourish at both Shady Side Academy and Harvard.

Berkman has graduated over 1,300 kids in 17 years as a head of school – first at Hawken School in Cleveland, Ohio, and now at Boston University Academy. This spring will be his last graduating class. He'll be retiring from academia to write books and do other projects, but he still expects to hear from his former students.

As in previous years, he's forged a bond with many of them. They often come to his office to chat, tell him about their families or career plans, or play with his golden retriever, Olive. "You always see him around," says junior Joy Blanchard. "His office door is always open. He is very dynamic."

Berkman's overarching mission as head of school is to develop the entire person at Boston University Academy, a hybrid institution where students take classes at both the self-enclosed high school and the university. They can select from 2,000 university electives and 24 modern languages.

"There is nothing like us, a full high school embedded in a major research university," he said. "On any given day, in any given week, 80 of our 170 students take two to four college courses. They often graduate with a year and a half of college credit. Most of our alumni graduate from college in three years or they get their master's and bachelor's degrees simultaneously in four years."

For all of their academic gifts, Berkman wants to make sure that his kids don't just rush through college years Doogie Howser-style, shortchanging their social growth. "If you accelerate it too much, they are not well rounded. So this is also a four-year high school with sports and clubs, as well as proms and yearbooks."

Berkman believes it's important that students at the academy are free to "geek out" on any subject without encountering social backlash from their peers. "They are delighted to be here. They work very hard, and they giggle and laugh in the hallways. They are safe to be themselves. There is no stigma for being intellectually curious."

When Berkman looks at some of his students, he sometimes remembers how he arrived at Shady Side Academy's Middle School nearly five decades ago. He was a good student – and a self-proclaimed nerd. Becoming a five-day-a-week boarder at the Senior School campus, however, allowed him to develop not only academically but also socially and athletically. He played on the soccer, squash and tennis teams. "In public school, I would have been cut from all of those teams," he said.

He was the youngest of five kids and the son of Allen, an attorney, and Selma, a homemaker, both civic leaders. He enjoyed hanging out with friends at the dorm during the week and then going home on weekends to visit his parents at their Squirrel Hill home, and later Oakland home. "I loved the boarding life," he said. Graduating from Shady Side in 1973, Berkman spent his senior year in Paris studying in a program made up mostly of college juniors, along with SSA classmate Billy Cook '73. He realized it was a valuable experience for him.

At Harvard, Berkman majored in "History & Literature" of England and America. During his sophomore year, he moved into Lowell House, one of 12 student residential houses on campus that are small communities headed by a resident master. "I jokingly said if Disney ever made an 'Ivy World,' Lowell House would be its façade -- with its bell tower, two courtyards, eight squash courts and a two-story library."

It wasn't just that Lowell House was movie-set stately. "It was a community, with family-oriented living arrangement," Berkman said. The sense of community was fostered by the housemasters, Zeph Stewart, a classics professor, and his wife, Diana. "Zeph had a mind like a steel trap," he said. Diana was a lovely hostess who'd prepare food and serve tea on Thursday afternoons for hundreds of undergraduates, graduate students and professors.

Upon their return to the United States, the Berkmans went back to Boston to attend Harvard Law School together. It was then that Berkman had a chance encounter in Harvard Square that would have a lasting effect on his career. He and his wife were strolling through Harvard Square when they bumped into his former Lowell housemaster, Professor Stewart.

When Berkman reintroduced McKey to the professor, he said, "This is my wife, McKey. You met her when I was dating her five years ago." A glint of recognition flickered on the professor's face. "Weren't you a religion major at Smith?" Stewart asked her. Berkman was amazed. "Five years later, he knew my girlfriend's major. It was phenomenal." That brief encounter stuck with Berkman and would ultimately influence the way he acted as an independent school educator. I want to know my students that well, he told himself.

He considered becoming a college professor for a while. But after realizing university research would not provide enough social interaction for him, in the mid-1980s he began a new career in secondary education. At Germantown Academy in Philadelphia, he was an English teacher and soccer coach before becoming director of middle and upper school admissions in 1988. Over the next decade, he worked in administrative positions at two other Quaker schools, Friends Academy in Locust Valley, N.Y., and Abington Friends School in Jenkintown, Pa.

In 1998, Berkman became head of school at Hawken School in Ohio soon after he joined the board of Shady Side Academy. The two schools had many similarities as far as size and budget and endowment. "We didn't compete with each other for students – just in sports! – so we benchmarked each other. It made both schools stronger."

He also had the joy of watching his four children, Philip, Nellie, Winston and Claire, attend Hawken when he was head of school there. (All four have graduated from college. Nellie has become an educator too, working as an early childhood teacher in Washington, D.C.'s public schools after a stint with Teach for America).

Berkman was appointed head of school at Boston University Academy in 2006. It was a perfect fit. "I thought I had died and gone to heaven," he said. He loves running a high school on a campus where students can take college classes and do a research project with a professor. "They do a 4,000- to 6,000-word senior thesis with a BU professor and an advisor from the Academy."

Younger students occasionally can face awkward moments in a college classroom, Berkman said. For instance, students will feel uncomfortable about divulging their age in a college class. Sometimes they'll say they are older to blend in. Other times they'll admit they're only 14 and 15. And when they do, the 18-year-old college student seated next to them typically will just say, "Cool."

In addition to his administrative and counseling duties, Berkman frequently teaches an English class. "He is a master teacher," said his wife. "He knows how to engage kids. He makes them think and understand the poem and novel by asking great questions and letting them do the thinking instead of lecturing at them." She said her husband also knows how to have fun. During lock-in, a sleepover at the school, he holds a Lord of the Rings marathon in his room. "Kids drift in and out all night," she said.

In his retirement, Berkman plans to take a break from the world of education. He's going to look for some civic commitment, as well as concentrate on writing another novel. He's already written a sequel to the Henry James dark comedy The Ambassadors, following the lead character, Strether, into the next stage of his life. "It almost wrote itself," he said. "The characters had voices of their own."

Berkman's next book will be based on a poem he adores and must have taught 150 times in the last 30 years – Samuel Coleridge's poem "Frost at Midnight." His historical fiction book will explore Coleridge's complex relationship with his son Hartley. He'll begin writing his new book soon after he sends his last class of students out into the world.