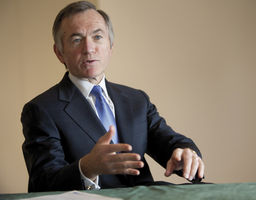 On Sept. 11, 2001, David Puth '74 was in London for a JPMorgan Chase global management meeting when someone whispered in his ear about a plane crash across the Atlantic. Minutes later, he and fellow bankers stared aghast at TV images of two towers of the World Trade Center burning. Puth rushed to the bank's trading floor, where he tried unsuccessfully to call his family back home in New York City. His shock deepened as he stared at the surreal images of two downed towers and a third one burning, office workers jumping out of the windows.

As soon as he could get a flight out, he was on a plane to New York. In late September, Puth sat in a conference room across from the towers, peering out the window at the still-smoldering rubble, firefighters racing from one blaze to the next.

As a senior manager at JPMorgan Chase, Puth could have just written a generous check. But as a board member of the Robin Hood Foundation, a poverty-fighting nonprofit located across the street from the wreckage of the World Trade Center, he did much more. Every Friday afternoon for the next 18 months, he helped track down and aid victims of the terrorist attack, often by funding other groups. "David jumped into action. He helped lead an effort to help people who lost a family member, their job, or just lost their way after September 11," said David Saltzman, executive director of the foundation.

At that tumultuous time in the banking industry, Puth was in Boston as head of global markets for State Street.

"Even though we were a strong institution, we were traveling in uncharted waters. There was no simple playbook on how to manage risk under those circumstances. It tested my resolve on how to do business and how to do business the right way. I felt like I had trained my whole life for that time."

Just as he sprang into action after the tragedy of 9-11, he didn't sit back after the subprime mortgage crisis that shook people's faith in Wall Street banks. Through his leadership role at several organizations, he has worked to rebuild trust in the banking industry.

"Today our country's major financial institutions are on a very strong footing. The company that I work for is part of what makes the financial system stronger," he said. "Our job is to reduce risks to a manageable level. It is now almost cliché to say it's not whether or not there will be another financial crisis. There will be. But the financial system will be better prepared to deal with that crisis when it inevitably materializes."

On any given week, Puth may fly off to Singapore or Tokyo meeting with banking clients and government officials about the foreign exchange market. The next week, in another time zone, he may be working in his office in New York. Or he may be securing funding for a job training program in an impoverished neighborhood in New York, or attending a board meeting of the Institute of Contemporary Art in Boston.

Puth credits his diverse interests to his education at Shady Side Academy, where he began attending in sixth grade. "What I remember most is how much the school encouraged and enabled one to look beyond what was a fairly rigorous academic environment to become a well-rounded individual," he said. "I participated in sports, theater and studied art. Shady Side was a unique institution then and is stronger today. I could not be more impressed with what I see being accomplished by Tom Cangiano and with the overall success of the school."

After graduating in 1974, the first year that women graduated, Puth attended Tufts University, receiving a Bachelor of Arts degree in political science. He also took many classes in economics, and his interest in global affairs piqued his interest in financial markets. "I was fascinated by the role of politics in the economy."

He got a job at a bank in Boston and one day walked onto the bank's small trading floor. He was instantly hooked by the excitement of trading, the decisions behind calculated risks. Instantly he knew this is what he wanted to do for a living. He also met his future wife, Leslie, then one of about 10 traders there.

Then he moved to New York, where he spent the bulk of his career, including 19 years at JPMorgan Chase. He served in a variety of senior global leadership roles at the financial services fi rm, including oversight of the bank's foreign exchange, interest rate derivatives, commodities and emerging markets businesses. He also served as a member of the bank's executive committee.

After leaving JPMorgan, he joined State Street Bank, where he was head of global markets, responsible for sales, trading and investment research. In August 2012, he joined CLS as CEO, director of the board of the CLS Group Holdings.

He has loved the challenges and ever-changing landscape of the financial markets, with its relentless pace, operating 24 hours a day, fluctuating with the headlines and changing economies. The financial crisis in Greece, the slowdown of the Chinese economy – it all aff ects what he does.

"The foreign exchange market is the largest and most active market in the world, with five trillion dollars each day of transactions." "Markets are the highways that allow the free flow of capital around the world," he said. "We help maintain the highways that keep the business moving. We put trillions of dollars a day through our system."

Puth has excelled in many diverse roles in the financial industry.

"Some people do well for a certain amount of time, and the world changes and they fail to adapt. But David is adaptable," said Dino Kos, the head of global regulatory affairs at CLS and former executive vice president of the Federal Reserve Bank of New York. "I can't think of anyone else who has excelled in so many different roles."

"He has a great combination of leadership skills, connecting to people and a great feel for the market, where policy is going," Kos said.

Puth also took leadership roles in national financial institutions. He was a member of the foreign exchange committee, sponsored by the Federal Reserve Bank of New York, which he chaired from 1999 to 2002.

This year, he was named chair of the market participants group, which has been established by the world's leading central banks to create a single global code of conduct for foreign exchange markets. As part of that role, Puth gives speeches to help restore public faith in markets. "He is a great statesman of the foreign exchange market," Kos said. "He is spreading the gospel of regaining public trust."

While Puth was building and reinventing his career, he was also devoting more time to volunteer work and community service. "I was raised in a household where we were always thankful for our general good fortune and one where we understood that we should never take that good fortune for granted."

He met Saltzman at the Robin Hood Foundation in the '90s and told the executive director he wanted to help. Saltzman recalled the banker wanted a tough assignment, so he gave him one.

He sent him to meet the Bedford-Stuyvesant Volunteer Ambulance Corp., then funded by Robin Hood. The nonprofi t volunteer ambulance corps was started by two community activists who organized volunteers to respond to emergencies on foot because it took city ambulances about 30 minutes to arrive in a neighborhood so crime-ridden it was nicknamed "the American Beirut." The crack epidemic had hit it particularly hard.

Puth was asked to help form a board of directors to help the group grow. The men from Bedford-Stuyvesant had their reservations at first. What could an executive from one of the largest banks possibly know about their impoverished neighborhood? Geographically, Puth lived only a few miles away in Brooklyn, but his neighborhood was a very different world from Bedford-Stuyvesant.

Puth helped break down that barrier by visiting regularly and spending a few nights in the ambulance with the group, watching them respond to calls. "He helped them with the fundraising that enabled them to get ambulances and to pay for training," Saltzman said.

"Honestly there aren't that many executives who would have been willing to go out to one of the poorest neighborhoods on a regular basis to help people he never met," Saltzman said. "He went every week. It was like so many acts of sheer goodness and selflessness."

In 1998, he joined the board of Robin Hood, and he made his largest time contribution after 9-11. He talked to groups that were aiding victims' families, including the undocumented workers who had died in the blast without anyone knowing it. "We backed an organization that went to Mexico and knocked on people's doors. We found families who had lost missing loved ones."

The group also distributed money that had been raised at a concert, much of it going to organizations that helped victims. But Robin Hood also sent 2,900 victims' families a $5,000 check for the holidays. The letters of gratitude that poured in still make him choke up. He said he will always be grateful that he had a chance to help.