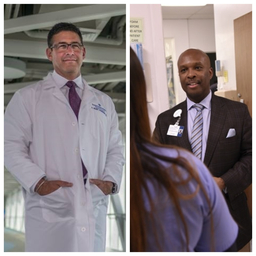 Even as a young child, Leon Haley Jr. had big dreams for his future — he would be the first African American broadcaster on national TV. When Max Robinson appeared on screen as the new co-anchor for ABC World News Tonight, the career lost its appeal for the young teenager. He decided to look for another way to make his mark.

He knew then he would become a surgeon.The inspiration came to him after a trampoline accident in the gym at Shady Side Academy Middle School. He was goofing off, and had things gone according to plan, he would have made an impressive midair slam dunk in the basketball hoop. But he landed awkwardly. Pain shot through his knee. He had to undergo knee surgery, but instead of the fear most kids experience, Haley was fascinated by the surgeons, the operating room, the equipment.

About the same time Haley had his career epiphany, his Shady Side Academy classmate Marc Harrison was narrowing his own career choices. Harrison knew he wanted to become a kayak river guide or a doctor. Getting some experience on the river and sleeping out in a truck made it clear that he didn't want to rough it all the time. After that, the decision to become a doctor was an easy one. "I always knew at the back of my mind that I would love medicine."

Both Haley and Harrison began their careers administering care to patients as physicians but have since transitioned to administrative roles as the CEOs of their respective healthcare systems.

Haley is the CEO of University of Florida Health Jacksonville, overseeing 6,200 employees, two hospitals, a medical and other professional schools in a system with revenues of $1.2 billion.

Harrison is the CEO of Intermountain Healthcare in Salt Lake City, Utah, overseeing 22 hospitals and 39,000 employees in a company with $7.2 billion in revenue.

Since their days at Shady Side Academy, Haley has moved from state to state as Harrison moved around the country and the world. The former classmates have stayed in contact via email or Facebook, often to congratulate one another on achievements in the complex world of health care.

Haley enjoyed being an emergency room surgeon, but he likes the challenge of running a health care system even more. "When I worked in the emergency room, I was taking care of one patient at a time. But what interested me was how could I take care of just not one or five patients, but how do we take care of hundreds? Each step along the way I got a bigger and bigger group of patients to take care of."

Haley was always a natural leader, even in his junior and middle school years at Shady Side Academy. "If there was an argument among friends, Leon was the moderator," said Judith Davenport, a family friend whose son, Ronald, was good friends with Haley.

"Leon made sure everybody had their say. He was a very fair kid," Judith said. "If someone said something negative, he would turn it into a positive."

Looking back on his years at Shady Side, where Haley started in first grade, he thinks of his many outstanding teachers. To this day, he remembers Mrs. Chase, his third-grade teacher, as a source of inspiration to learn and motivation to succeed in school.

Haley was also a star athlete, his speed propelling him on the track and the football field, where he was a running back. "They would give Leon the ball and he would take it to the outside and it would be gone," said his friend, Lee Washington.

"He was always serious about what he wanted to do," said Washington, impressed yet unsurprised by his former classmate's career achievements.

The rigorous academics of Shady Side Academy education prepared him for his undergraduate education at Brown University, where he studied human biology. Then he returned to his hometown to attend the University of Pittsburgh School of Medicine before doing his residency in emergency surgery at Henry Ford Hospital in Detroit.

Though surgery fascinated him, he discovered that he was too restless for the long hours it required him to stay focused on a single task. "In the operating room, you had to be gowned, gloved up, and masked and obviously, it was very meticulous surgery. It wasn't my personality to stand still that long. I had to be more fluid."

In the fast-paced environment of the emergency room, he began to think about how he could improve the quality and efficiency of the patient care process. "We were busy, but the systems weren't working. Emergency medicine is kind of the canary in the healthcare coal mine. Could I make a bigger difference through an administrative route?"

Haley continued to work in the ER at Henry Ford while he earned his master's degree in health administration at the University of Michigan by taking once-a-month weekend classes.

In 1997, he moved to Atlanta to become the chief of emergency medicine at Grady Hospital. He and his team were credited with reducing patient wait time, establishing electronic health records, and making multiple other improvements to patient care. Haley went on to be named deputy chief medical officer at Grady and then vice chairman of the Department of Emergency Medicine. He was ultimately promoted to executive associate dean in 2013.

His children attended The Lovett School, a private school with a Shady Side Academy connection. The children's social studies teacher, Andy Sayles, was the son of Leon's favorite science teacher. Dr. Haley reconnected with this former teacher when he came to Atlanta to visit his grandchildren.

He then moved south to take a position as dean of the University of Florida College of Medicine at the before being named the CEO of UF Health Jacksonville. He likes wearing the many hats his job requires. "I like that I get to improve the care of hundreds of thousands of patients every year who impact our system," he said. "I get to work with my faculty and staff in the college and hospital. I am really engaged in helping to trying to help people grow their career."

Haley credits his mentors and teachers for helping him grow into the doctor and the CEO he is today — now he gets to return the favor.

Dr. Mark Harrison was a second-year medical student at Dartmouth Medical School when he ran his first Ironman, the grueling triathlon that combines a 2.4-mile swim, 112-mile bike ride and a 26.2-mile run.

He's been a committed triathlete ever since, finishing seven Ironman events and many shorter races. In 2014, Harrison competed in the sprint distance racing World Championships with the U.S. team.

Known for pushing himself, Harrison often gets up at 4 a.m. to put in an hour or so of exercise before work. "I love running on trails."

That level of discipline comes as no surprise to his Shady Side classmate, Owen Young, who met the first day of high school.

"I saw that spark in him in high school," Young said. "He is quite a marvel that way. He has a combination of optimism and high pain tolerance that you need to do triathlons."

In high school, Harrison's rugged, outdoorsy side rubbed off on Young. "He's the guy who got me on skis at Seven Springs," said Young, now a cellist with the Boston Symphony Orchestra. "He taught me how to waterski. He was always outdoors, horseback riding, running, kayaking, canoeing, snowshoeing. He liked the challenge of learning the technique and he loved the exercise and physicality. He always had a drive and intensity about him."

The son of a surgeon, Harrison was also highly motivated in his studies — the sciences as well as literature and history. His hard work at Shady Side Academy prepared him to succeed at Haverford College, where he majored in psychology before going to Dartmouth Medical School. "I felt like I was extraordinarily prepared because of Shady Side," he said.

In medical school, the physicians who went into pediatrics and their mission to help children inspired him to specialize in pediatric critical care.

During fourth year of medical school, he found love in the delivery room while working with fellow physician Mary Carole, also a pediatrician specializing in critical care. "I was delivering the baby. She was resuscitating it," he said. "We met over a laboring mom."

That might not be a romantic first date, but it was the start of a whirlwind romance. The couple met in June, married in November, and then moved to Utah, where he worked as an intern and she was the chief resident at Primary Children's Hospital.

The Harrisons soon moved again so that he work at the Cleveland Clinic in the pediatric critical care unit. He hadn't planned on becoming a supervisor, but he was named department chair. After several promotions, he took an administrative position as the Chief of International Business for Development.

His next promotion would take Harrison and his family halfway across the world to Abu Dhabi in the United Arab Emirates. The challenge: lead a team of 35 people to develop a world-class medical facility. "It was not easy," he said. But he and his team succeeded in establishing 2.6 million square foot health system with more than 3000 employees. It was an adventure for his family. "We had an incredibly diverse experience."

He returned to the United States being recruited by Intermountain Healthcare as the new CEO.

Harrison is committed to reducing health care costs. To that end, he will oversee Intermountain's launch of a nonprofit generic drug company in 2019. "We think generic drugs are often in short supply and exorbitant. We will run it like a public utility with lower margins and lower prices."

"We try to wake up every day and do what is right for the patients," he said.