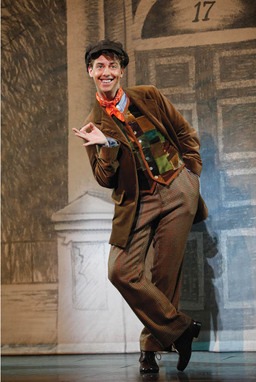 One week, Christian Borle '91 crooned "Chim Chim Cher-ee" and Supercalifragilisticexpialidocious" on a Broadway stage, tap dancing and swirling a soot-covered brush with puckish delight. The next week, he transformed himself into a man ravaged with AIDS and abandoned by his lover.

Going from Bert the chimney sweep in Mary Poppins to a prophet of doom in Angels in America would give many actors a serious case of whiplash. But Borle is known for his range, a man whose mind and body are so flexible that a former drama professor called him "Gumby."

The 38-year-old has morphed from Emmett Forrest in Legally Blonde: The Musical -- a role which earned him a Tony nomination -- to Jimmy Smith in Thoroughly Modern Millie to Not Dead Fred in Monty Python's Spamalot.

While well-known among musical theater fans, he walks largely unnoticed through the streets of New York City, where he lives.

That may change as he enters American living rooms in the upcoming NBC series Smash, which debuts in February. Backed by Steven Spielberg, the show's storyline is about the making of a Broadway musical about Marilyn Monroe. Borle will play a gay composer opposite Debra Messing, who landed the role of the production's lyricist.

"I already hit the lottery in just getting the role," Borle said, the excitement in his melodic voice palpable through the phone line. "My mother is very, very, very happy. But you never know where it is going to go. I am trying very hard to just take it one step at a time. It can air and maybe people don't respond. Then it has a short life. Or, it's a huge hit and all of the sudden, it's this thing."

Since filming of the first 14 episodes of Smash began this fall, Borle has had to adjust to the rhythm of TV versus the stage. "If you do a Mary Poppins or Angels in America, you do the same thing night after night," he said. "You can fine tune. You show up at work and say, 'Tonight, I'm actually going to get it right,' which you never really do.

"But, with TV, we did a couple of scenes in the pilot, and we will never do them again. It's hard to leave it behind."

He is inspired by what he calls the "fearlessness" of Messing, a primetime veteran who enjoyed a long run on Will & Grace. "She has such a great sense of adventure," he said.

Borle plans to infuse his composer character with a "raging intellect." "There's something about music -- and the way people think about music and create music -- that lends them all a similar, cerebral sense of humor," he said.

That should come naturally to Borle, a man who showcased his comedic flair in a musical eBay commercial, got laughs for his dry humor in Spamalot, and whose first email exchange with this writer began, "Nice to meet you, albeit via the series of pneumatic tubes that is the interweb."

As a sophomore at Shady Side Academy, Borle didn't seem like a natural showman at first.

Standing just 4-foot-11, he was small and shy. He played tennis, "but couldn't hang because I was so small." A self-described nerd, he loved watching Star Wars and reading and drawing superhero comics. But one day during a school dance, the sophomore picked up the mic and started to belt out a tune.

The notes certainly struck a chord with choir director Daniel Brill. Borle's singing was in perfect pitch that floated over the wiggling masses like a "silver flute."

As soon as the song ended, Brill rushed over and introduced himself. "You have a great sound," Brill told Borle. He invited him to try out for musicals.

Later that year, Borle's friends dragged him to a tryout for Oklahoma! He didn't gravitate toward competitions, but his shyness melted away on stage and a rush of adrenaline surged through him as he tried on different roles. "I came alive," he said. He landed the role of Will Parker and he was hooked. He loved the sense of community in the theater.

Brill, now chair of SSA's arts department, knew Borle was a natural. "As soon as he stepped on the stage, the lights hit him," he said. "He was on. He never had any stage fright. But it was not about ego or overacting. It was never, 'Look at me.'"

Borle kept landing roles in musicals, and his love of theater deepened. So did his love of drawing. He would spend hours in his bedroom in Fox Chapel, drawing Batman, Spider-Man and other superheroes while listening to show tunes.

"Should I act or draw?" he asked himself. He chose acting because it was more social.

Brill didn't sugarcoat the life of an actor. It was a ridiculously hard way to make a living, he told his star student. But Borle wanted to go for it, even though he came from a scientific family. His father, Andre, was a doctor and professor of physiology at the University of Pittsburgh, while his mother, Lee, was assistant to the dean of medicine.

One day in the car, he asked his father, "Do you mind if I am not a doctor?"

"Not at all," he recalled his father replying. Both parents were just happy that he had found something that gave him great joy. Borle called his parents' acceptance "a great gift."

The 17-year-old wanted to go away to college, but his friends told him he would be silly not to apply to the premier drama program at Carnegie Mellon University in his hometown. Gary Kline, associate teaching professor of [associate professor of] musical theater at Carnegie Mellon, remembers meeting a "gangly kid with great big eyes." "He looked like he could play the geeky kid next year," Kline said. "He had a plain voice."

But if he was raw, he was also driven to improve.

"This guy was like Gumby, bendable and movable," Kline said. "He wanted to learn everything. He has so much drive and spirit. He came in a blank slate and went so far in four years. His heart was in the work.

"I taught him a physical kind of singing, moving the body with the voice. He developed a beautiful bravado so there was a ping that could cut through the theater. It had laser beam quality to it, bright and clear."

During Borle's junior year, he and his classmates were scheduled to do a cabaret performance in Pittsburgh, Kline said. A huge storm moved in, making the roads all but impassable. Kline suggested canceling, but Borle and his classmates insisted that the show go on.

"We risked body and limb to get there," Kline said.

After graduation, Borle moved to New York City at age 21 and landed his first acting job -- but it wasn't exactly Broadway. He worked as an elf at Macy's Santaland, rotating posts as "a cash register elf, a wishing tree elf, a photograph elf, a greeting elf." He said elves were warned that they would be "pink-listed'' -- banned from Santaland forever -- if they didn't stay on until the New Year, a policy that discouraged staff from quitting the day after Christmas.

Borle quit early, but he had a good excuse. He was offered a job in The Who's Tommy in Germany. His bosses at Macy's understood, but even so, his elf days were over. "I was pink-listed. I carry the shame to this day, but it was worth it," he quipped.

He tended bar to pay the bills, but his starving artist days were cut short when he landed a replacement role in Thoroughly Modern Millie on Broadway in 2002. It was great fun, but as a replacement, he was below the radar, omitted from the theater reviews.

His big break came in 2005 when he became a utility player in Monty Python's Spamalot, changing costumes as he went from Prince Herbert to Not Dead Fred to French Guard to Minstrel to Historian.

From there, in 2007, he landed the role of Emmett Forrest in Legally Blonde: The Musical, earning praise and a Tony nomination. Kline, his former college professor, said. "The show is a sea of silliness, and there was Christian Borle really doing his acting. He anchored the show. He was fearless and inventive. He was so proud of his Tony nomination."

Borle relishes the chance to play new characters. "All those roles have pushed me in different ways vocally," he said. "I sang in Millie in a different way than I sang in Spamalot. Then, Legally Blonde was a completely different style as well."

The next year, he charmed crowds on the Mary Poppins stage as Bert, the role made famous by Dick Van Dyke in the Julie Andrews movie 42 years earlier. "You start with the Cockney accent and go from there," he said. "I wanted to make him an actual person as opposed to a caricature, but parts of it had to be larger than life. It was a balancing act."

His former teacher, Brill, came to Broadway to see him. "He had a spark and a twinkle in his eye, but he didn't copy Dick Van Dyke," Brill said with evident pride. "He made it his own."

All the tap dancing made every performance a workout. "He had to have the suit altered because he lost so much weight -- and Christian doesn't have a lot of weight to lose," Brill said. "Every show was like an aerobics class." A singing aerobics class, at that.

He put down his chimney brush in June of 2010, and a week later started rehearsing the role of Prior Walter in Angels of America. To prepare for the U-turn from whimsy to anguish, he spent a week at his sister's rural farm. He was honored to be in the acclaimed Tony Kushner play.

His own life mirrored the devastation he portrayed on stage. His father was gravely ill (and never recovered) as Borle was plunging into this dramatic role about death. "There was an entire time of my life where I was living in fear of mortality or loss," he said. "It was a really potent, Technicolor time in many ways. It was enormously helpful to have that outlet during that very difficult time."

For all his success, Borle faces the actor's occupational hazard of worrying about his next paycheck. "It is common phobia among actors," he said. "Insecurity is rampant. Over the last couple of years, there would be moments when I would be between jobs, and you really do think, 'Maybe I will never work again.'"

His role in Smash will add another dimension to his resumé. The fact that Spielberg is backing the project is an added thrill to the science fiction fan who loves the director's movies.

One day, he and other cast members were doing an early reading, which was interrupted by a speaker-phone call from Spielberg. The famous director said hello to the cast, and Borle felt a chill. "I could not believe what was happening," he said. "It was like an out-of-body experience."

Kline believes this TV role will give Borle a whole new set of fans.

"You cannot really be a name just doing Broadway," Kline said. "The Smash role is a huge breakthrough for him. It will give him currency."

And once again, Christian Borle will bend himself in a new direction.