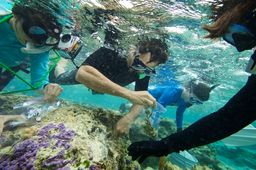 Meyer, after all, is a research zoologist at the Smithsonian Institution's National Museum of Natural History. Despite the groundbreaking research he conducts at one of the most famous museums in the world, he knows how to laugh at himself. So he hasn't had the heart to change his Siri greeting, even though it sometimes shows up in the signature line of his work emails.

Meyer has a passion for finding new species, especially in marine habitats, and for conducting research that educates the public about biodiversity. The fact that he does what he loves at the second-most-visited museum in the world, behind only the Louvre in Paris, makes it even sweeter. "It's the best job in the world," he said.

He appreciates the history of the museum every morning during his 20-minute morning walk from his home in downtown D.C., past the U.S. Supreme Court, by the U.S. Capitol rotunda and across the Washington Mall before entering the back door of the Smithsonian Museum of Natural History. Here, he passes a giant squid and a famous early human skeleton named Lucy before entering his office, which overlooks the Washington Monument. "It's pretty spectacular," he said.

His field research trips are pretty spectacular too. He travels for weeks at a time to dive at exotic overseas locations, such as Moorea, a postcard-pretty French Polynesian island, located just a few miles from Tahiti.

Since 2007, he has been director of the Moorea Biocode Project, the first scientific inquiry attempting to characterize all species for an entire tropical ecosystem. That means he and about 300 scientists representing 37 countries have been on a race to catalog every living thing on Moorea (and beneath its coastal waters) that's big enough to be picked up with tweezers.

If that sounds like a gargantuan and super-intense scavenger hunt, that's because it is. From 2006-2012, researchers climbed up craggy peaks, tromped through lush forests and dove into blue water on this 52-square-mile island to find samples of plants, algae, insects, fungi and animals.

The project, funded by a $5.2 million grant from the Gordon and Betty Moore Foundation, is an international collaboration between the Smithsonian, University of California-Berkeley, the French Polynesian Research Department and other partners.

Each day in the field was an adventure. "You're excited because you know you're going to find something that you haven't seen before," Meyer said. One day while digging through rubble, he found a rare alien-like sea urchin. Knowing he was in interesting territory, his eyes widened when he saw a spectacular live Children's cowrie, a type of marine snail. Though he had done his doctoral thesis at the University of California-Berkeley on their polished shells, he had never collected one himself before.

Of course, scuba diving in a popular honeymoon destination hardly seems like hard labor. His friends ribbed him about going on a boondoggle. But out in the field at Moorea, Meyer typically operated on four hours of sleep after collecting specimens, and testing and analyzing them late into the night. Though it's tough to get out of bed the next morning, he said, jumping into water quickly woke him up.

Neil Davies, director of the UC-Berkeley Gump South Pacific Research Station, was amazed at Meyer's stamina. "Chris works all day in the field and he works all night," Davies said. "He doesn't need to sleep. He is very passionate, even compared to other researchers who are passionate. He leads by example."

In a pressure-cooker environment where scientists tire and tempers sometimes flare, Meyer was a steadying presence and a motivator, Davies said. "He herds the cats, and some of the cats are lions."

His Siri moniker notwithstanding, "he's very easygoing, always joking, very amusing," Davies said. "He is a good person to head the project. He's also a good communicator with the public."

Davies said Meyer is adept at using new technology to study biodiversity. Inside the laboratory, researchers studied specimens and created a genetic tag that isolates a fragment of DNA. Though that doesn't identify the particular individual, it does narrow it down to the species level.

Meyer is writing reports on the team's findings, including the 40,000 specimens they logged and the 7,500 distinct species they identified. Most of the unidentified species are microscopic organisms, which represent the majority of the diversity on earth.

"You kind of have to check your ego and say, 'Look, there is a lot we don't know.' That's why we're doing it," Meyer said. "We're supposed to be the world's experts on biodiversity, but 60 percent of this stuff is still undescribed."'

A library of genetic markers and physical identifiers for every form of life found on the island is being formulated so ecologists and biologists around the globe can use it as a reference.

Meyer and other researchers hope to create a simulated model ecosystem so they can help policymakers reach informed decisions about land use. For example, they might warn them that if they develop to watershed a certain way, it will affect certain species. Or they could tell them that if the climate changes and the sea level rises over the next 50 years, it might jeopardize other species.

Those are the issues that keep Meyer working around the clock on a tropical island, a place others go to slather on the sunscreen and chill.

As a kid growing up in Fox Chapel, Meyer was a natural collector. Baseball cards, grains of sand, other trinkets – he would stash it all into unlabeled cardboard boxes in his closet. When he retrieved them decades later, he was surprised by the volume of his childhood acquisitions. "I had a hyperactive collecting gene," he said.

He loved to tinker, building model airplanes and taking apart broken appliances. He pored through National Geographic books. Still, he was a well-rounded kid, said his mother, Penny. "If the kids were out riding their bikes, he would go out with them. He once went over the handlebars. We had to go to the emergency room to have his chin sewn up."

That accident convinced Meyer he didn't want to use his science acumen in medicine. "I couldn't stand looking at blood."

One of his favorite pastimes was splashing around in creeks, his hands muddy, and his spirit exuberant as he hunted tadpoles, crayfish and other creatures under rocks. Even as an 8-year-old, he played with the eye of a scientist.

"He would look at the current and say, 'The water is going this way,' and he would know what stone to pick up," said his childhood friend, Jeffrey Todd '85, vice president of BNY Mellon in Pittsburgh.

Meyer's curiosity was also stoked by many trips to the Carnegie Museum of Natural History and the Carnegie Library. For a fun afternoon, he would head to Alan's Pet Shop, where he would watch the fish in the giant aquariums.

Like their grandfather and father before them, Meyer and his two younger siblings attended Shady Side Academy. He liked science, but what sparked his interest in zoology was a spring break trip to St. John in the Virgin Islands, led by former Senior School science teacher Bill Diehl. His uncle had been generous enough to lend him a good camera. Taking underwater photographs forced him to focus on the incredible marine life teeming within that intricate, fragile ecosystem. Something clicked.

"Shady Side built your confidence to pursue your passions," he said.

The school also made him well-rounded. He played baseball and soccer, and after a late growth spurt during senior year, became a talented left-handed pitcher. "I couldn't throw straight, and that is an advantage for a pitcher," he said.

He continued to play baseball at Colgate University (another family tradition), but his real passion became science. He took geology and biology and ended up majoring in both disciplines. He was particularly drawn to paleontology, and its evolutionary emphasis changed the way he thought about the world. "It's pretty incredible to think that this amount of animal diversity on the planet is derived 600 million years ago from one common ancestor."

His paleontology professors took him under their collective wing, and he loved joining them on their field expeditions.

His research dreams came true when he was awarded a prestigious Watson Fellowship, which supports a year of international travel and research to kindle "resourcefulness, imagination, openness, and leadership and to foster their humane and effective participation in the world community." After his 1998 graduation from Colgate, he was free to travel and conduct research wherever he wanted for nine months. The world was his oyster. The only rules were that he got one flight out of the United States and a return flight.

He decided to study cowries, whose beautifully patterned shells are collected for trade and revered as status and fertility symbols in many cultures around the world. As he traveled from Hawaii to Australia and on to Africa, he conducted his own investigations about the living animals.

Many of the people he encountered in his travels were dumbfounded that this American researcher had traveled so far to study snail shells. But he was fascinated by cowries, both from a biological perspective and a cultural one. It gave him an international perspective, something that the fellowship nurtured and that helps him today in his job at the Smithsonian.

He expanded his research from that memorable trip into a master's degree in paleontology at UC Berkeley, where he also earned his doctorate.

In 2007, Meyer began working at the Smithsonian, where he loves both the research and educational aspects of his job. His latest focus is the BioCube project, a collaboration between the Smithsonian, National Geographic Magazine and the Encyclopedia of Life.

If the goal of the Biocode project was to make an inventory of an entire ecosystem, BioCube zooms in on one cubic foot of space. Scientists lay down square frames in different locales. This gives educators and their students the chance to study biodiversity over time or to compare environments. For example, they might study a BioCube one foot from a busy hiking trip versus 30 feet away.

Meyer explained that the cubic-foot scope was chosen to promote learning. Any smaller, and findings wouldn't be meaningful. Any larger, and they would be overwhelming. "One square foot is the Goldilocks of what you can handle," he said.

Students get excited about how much life is inside a cubic foot of space. "It's amazing the impact you have on students," he said. "They are astounded how much you fit in a cubic foot. No one ever says, 'I thought I would have found more.'"

Exposing kids to BioCubes helps Meyer share his joy of exploring rich and diverse habitats. It helps make what seems ordinary extraordinary. In fact, it reminds him of what he used to do on his own as a boy, when he and Todd would splash around the creeks in Fox Chapel and Ligonier together, looking for tadpoles.

The two friends, who have adjacent vacation homes near Ligonier, have stayed close and still hang out together along the creek.

On a recent day, as Todd watched his longtime friend stepping over rocks in the creek, he asked his friend what he was doing.

That's why, said Todd, the Smithsonian gig is perfect for Meyer: It lets him keep playing in the water. "Chris is a big kid," Todd said."He always had that sparkle in his eye."