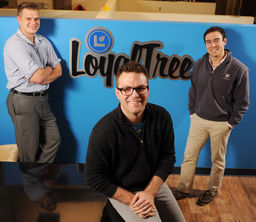 Once again, Brock Bergman '03 was purging his inbox of unwanted marketing emails. As he clicked through message after unopened message, he shook his head. He hadn't realized that signing up for merchant loyalty programs would give retailers carte blanche to bombard him with promotions for things he would never, ever buy.

He also detested the loyalty cards they handed out that dangled the possibility of a free coffee or other reward after 10 visits. "I would have 30 cards in my drawer with three punches each," he said. The promotions seemed more like a customer-repellant program than a tool for building loyalty. There has to be a better way, he thought.

But as he cleaned his email inbox one day in 2007, Bergman had an epiphany that turned his irritation into inspiration. As the son of an entrepreneur, he had always known he would start his own company. His big idea finally arrived in the form of an electronic loyalty rewards program. And when smart phones and apps exploded onto the scene a few years later, they provided the perfect vehicle to deliver his plan to businesses and consumers.

In May 2010, Bergman started LoyalTree, a website that allows members to download a free app, scan receipts electronically and receive vouchers on their phones. In turn, restaurants receive detailed sales and demographic information about their customers.

In July 2011, Bergman was forging ahead with the project when he got a call from another young entrepreneur. Jake Klinvex '05 was moving back to Pittsburgh to start his own clothing company and wanted to suss out the local startup scene. He wasn't a friend of Bergman's, but he'd studied with him at both Shady Side Academy and Villanova University. The two had sometimes made small talk around campus, but they didn't really know each other.

Over lunch at a North Side restaurant, Bergman and Klinvex clicked right away, their ideas bouncing off of one another like sparks. They were, it seemed, kindred entrepreneurial spirits.

A few days later, Bergman fired off a follow-up email to Klinvex outlining his suggestions for the younger man's new business. He was always willing to help a fellow entrepreneur. But he couldn't help asking Klinvex, "Hey, have you thought of taking a position at LoyalTree?"

Klinvex hadn't intended to work for anyone else ever again. He was launching his own men's apparel company that would allow customers to order one of 54 size combinations that would fit better than the off-the-rack options of S, M, L, XL and XXL. The service would provide customization faster and for less money than custom-tailored clothing. The lean college graduate came up with the idea because he always had trouble finding clothes that fit.

He was poised to launch his second startup. At age 19, while a student at Villanova, he started his first company, Persontation, a video communications tool for businesses. He helped fund the venture with $15,000 of his own savings - money he had scrimped since the age of 12 while caddying and working other jobs. He also convinced his friends to invest. Persontation, which was purchased by eMoney Advisor in May 2009, helped put him through college, not to mention gain valuable business experience.

After selling his company, he lost control of it. It was no longer his baby. He yearned for that fire again, and Bergman was nothing if not fired up. "I saw a guy who can sit down with anyone and sell them what he was doing in 10 minutes," he said of that lunch meeting. Klinvex wanted in on the bottom floor of this mobile technology company. He figured he could start his custom clothing company later.

In September 2011, the two young entrepreneurs reached a deal in which Klinvex became a partner of LoyalTree.

Outwardly, the two entrepreneurs have different styles. Bergman, 28, is intense and driven, peering out of rounded glasses, as he talks rapid-fire about his company. His mother and friends kid him about being "an 80-year-old person in a 28-year-old person's body." By contrast, Klinvex, 26, is more soft-spoken, measures his words and makes the occasional self-deprecating joke. He is an understatement to Bergman's exclamation point.

Bergman viewed these differences in style and approach as assets. When it came to choosing a partner, he'd wanted a compliment, not a clone. His father, Jeff, who'd started his own mobile MRI company, had given him that advice.

"Jake and I challenge each other," Bergman said. "I am very visual and do graphic design. I notice every pixel. He is more big-picture and knows what has to be accomplished with pixels. Often, I am very quick to the point. He thinks things through to make sure we approach things the right way."

They share more than their educational background. Both caught the entrepreneurial bug at an early age, eschewing the conventional wisdom that college graduates should pay their dues at large corporations before striking out on their own.

"I have never liked working for anyone else," Klinvex said. "You have to go slower if you have an idea. You have to get approval." He does what he can to encourage young entrepreneurs: "I wish more kids would take that risk at college."

Bergman agreed. In fact, he was so devoted to spreading the self-starter gospel that he embarked on an unusual adventure the summer after his junior year at Villanova. He traveled the country to make a documentary on successful entrepreneurs.

He and his roommate bought a dilapidated RV on eBay for $3,000. Subsisting on granola bars, canned tuna and ramen noodles, and crashing in RV campgrounds, they roamed the country filming luminaries ranging from NFL franchise owners to zookeepers to movie producers.

Bergman wanted to discover what made successful people tick. Never mind that the RV kept breaking down and that the air conditioning and radio stopped working as they racked up miles. He was inspired hearing the same advice over and over: Follow your passion. Do what you love.

He edited some of the footage and showed it to other college students so they could see beyond the traditional career trajectory. "I never understood why I had to put on a suit and pick up a briefcase and work for a large company for years and live in a small apartment in New York," he said. "Why do I have to waste 10 years of my life to do what I want to do?"

He would rather own less and wake up every morning excited about work: "I don't need another car or a pair of $300 boots. I would rather do something I love."

Bergman and Klinvex hold another shared belief - that their Shady Side Academy education has given them a jumpstart on their entrepreneurial dreams. "I owe everything to Shady Side," said Klinvex, who enrolled at SSA in Middle School. "If I didn't go to Shady Side, none of this would have happened. It 1,000 percent formed who I am. If you go to Shady Side, you are expected to be successful."

Bergman agreed: "They instilled in us that hard work takes you very far. They gave us the feeling that we can control our lives."

Both men channeled that sense of destiny into LoyalTree, which, as of November 2012, has been downloaded by about 30,000 consumers and 256 businesses in its test market of Pittsburgh and is going nationally. Customers scan receipts into their phones and get vouchers and other rewards electronically. In turn, businesses customize rewards to their actual purchases - not just ages or zip codes. "It's the future of commerce," Bergman said.

When it was time to take LoyalTree national, the two partners hired another Shady Side Academy graduate. They needed a people person, and Jim Ambrose '05, one of Klinvex's best friends, was the natural choice to become director of development.

Ambrose, 25, and Klinvex are second cousins, but they didn't get to know each other until Ambrose transferred to Shady Side Academy in high school. They became friends after bonding on the football field - Ambrose playing receiver and cornerback, Klinvex fullback and linebacker. They also played in the outfield together on the baseball team.

The cousins stayed close during college. Ambrose studied architecture at Rensselaer Polytechnic Institute, where he had a football scholarship. He was skilled in math and drawing, and architecture seemed like a good fit. As he recalls, "I wanted to do something in life where I said, 'I built that.''' Though he interned as an architect and enjoyed drafting designs for a brewery and train station, he decided that it was not the career for him.

Klinvex thought Ambrose was a natural in business given his outgoing personality. "He has a way of connecting with people," he said of his cousin. "He is the life of the party."

During his fifth year of college, while working on his architecture thesis, Ambrose stuck one toe in the business world by helping Klinvex work out some of the logistics for his startup clothing company. When he learned that his friend had changed course to work with Bergman, he inquired about a job too.

"I am in. No questions asked," he told his cousin. He had confidence in his snap decision: "You just get a feel for people. Coming from a background of Shady Side Academy, you know everyone is trying their best. I want to start a company with people who push themselves to the limit."

Fresh from working back-to-back 22-hour days, Ambrose said, "I don't care how long I work, how stressful it is. The fact that I could be with one of my best friends building something that could literally change a lot of industries is very exciting for me."

In fact, Ambrose and Klinvex now room together in a Shadyside apartment, and they get along well. "There is not enough time to fight," Ambrose said with a laugh. "We are either working or unwinding from work."

During work hours, Ambrose is out selling the competitive advantages of LoyalTree. Though LoyalTree has competitors, Ambrose says it is the only app on the market that connects the loyalty program directly to the point-of-sale cash register, making it convenient for both the retailer and consumer. The app also lets users search for other nearby businesses like the ones they already frequent. The startup got a big break when Coke decided to use LoyalTree to reward customers of its Taco Mac restaurants.

The company markets its platform to merchants, who in turn talk it up to their customers. "We want it to feel authentic," Bergman said.

Berkman is thrilled to be on the frontlines of e-commerce. Even as a little kid, he was fascinated by marketing and would tell his parents why certain TV commercials worked and others didn't. So it's only natural that he now spends his days trying to help businesses reach customers in cyberspace. "We are trying to solve how commerce works in a digital age," he said.

He is grateful for the help his business has received along the way. As he grows his business, Bergman gets advice from his father, Jeff. "He helps me, but he is not overly intrusive," he said. "He wants me to learn things on my own."

The company, which has seven full-time employees and two part-timers, just hired another Shady Side graduate, Hillary Friedman '04, to do customer support. "More than half of our employees are from Shady Side," Bergman said.

Klinvex looks over at Ambrose and Bergman and smiles. "We couldn't have dreamed in high school that this would have happened."