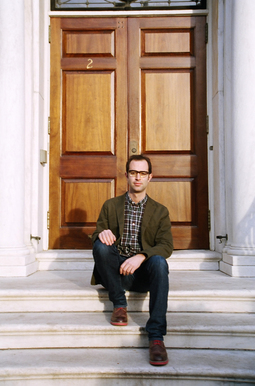 The minute Benny Shaffer landed in China, his senses went into overdrive. The junior at Shady Side Academy took it all in — the aroma of lamb kebob barbecue wafting from street vendors' grills, the masses of people streaming by, the flash of red and yellow neon. As he walked along the chaotic streets of Wuhan, he recognized many Mandarin characters he had been learning in Meiwang Shao's class, the beloved teacher who had organized the three-week exchange trip.

It was the spring of 2004, and Shaffer was excited to be in a country undergoing so many rapid transformations. He vowed to return to China and master the notoriously difficult language. "It was an awakening," he said.

In 2005, Shaffer went on to Columbia University, majoring in East Asian Languages and Cultures. He spent his junior year abroad in Kunming in southwest China to sharpen his skills. He also stumbled upon a few bootleg VCDs that changed his course of study. In his dorm room, he watched Five Golden Flowers, a romance/propaganda movie made about the Bai minority people in Dali, and a few other films made about ethnic minorities during the Maoist period.

"I felt the films gave me insights into the politics and history of the region," he said. "I saw these films and became interested in the anthropology of media. I wanted to explore how cinematic representations of ethnic minority people, those living on the margins, fit into the larger political context of Mao's socialist modernization projects."

Today, the 26-year-old Shaffer is delving deeper into independent Chinese film as he earns a doctoral degree in anthropology at Harvard University. His research focuses on independent cinema, contemporary art, and popular performance troupes in China.

He also makes his own films, videos, and audio recordings as part of Harvard's Sensory Ethnography Lab. The idea behind this evolving branch of anthropology is to engage and document cultures not only with words, but through the sensory dimensions of cultural experience.

Making and studying film in China seems the perfect convergence of interests for Shaffer, who grew up loving movies and being fascinated by the larger world from the vantage point of a small town in Pennsylvania.

New Wilmington, Pa., about an hour north of Pittsburgh, has less than 2,500 inhabitants. The home of Westminster College is so pastoral that Amish buggies share the roads with cars. "This harmonious co-existence of two very different cultures influenced Benny," said Shaffer's mother, Mary.

As a kid, he had a keen interest in other countries. By fourth grade in public school, he'd won a local geography bee, and became aware that the distance around the Earth along the Equator was about 24,000 miles. A couple of years later, he was asked to write a paper on where he would go if he could travel through time. The future China scholar wrote that he would like to visit the Tang Dynasty, citing its invention of paper money and its beautiful artwork on porcelain vases. "He was always interested in becoming a traveler," said Mary Shaffer, who found the telling memento recently.

He also was empathetic, a trait that would help him as an anthropologist living and working with groups on the margins of society. "Even as a young child, he worried about other people's rights and their troubles and difficulties," Mary Shaffer said. "He considered himself a lucky child and worried about other people not having these things. He was drawn to older people at our church. He was interested in their histories and stories."

The family would go to movies frequently, and Mary would encourage Benny and his younger sister, Jackie '07, to watch the credits afterward so they could appreciate everyone who had contributed.

Shaffer grew up playing ice hockey as the goaltender for a traveling team. During games, he befriended some players from Shady Side Academy, which had just built a new ice arena. They told him he should come to Shady Side, planting the seed for him to enroll as a boarder for high school.

"At first, I was intimidated because there were so many serious students, but then I adjusted and took advantage of the opportunity to study in a more challenging environment," Shaffer said. "To balance academics with my hobbies, I played hockey, Ultimate Frisbee, and was a percussionist for various music ensembles. Shady Side was the perfect place for me."

He loved life in the dorm, and he and his roommate, Senthil Selvaraj, started a juggling club, offering lessons in Chinese Yo-Yo and plate spinning and ball juggling on the quad. To their surprise, the club was a hit and took on a life of its own. Students joined with their own circus skills, such as stilt-walking, and would showcase them at the school's performing arts events. The juggler's club became a popular stress reliever on campus. Another interest for Shaffer was playing drums in a band called The Wakes with Chet Vincent '03 and Mike Yarsky '04.

Selvaraj, still a close friend, said, "Benny is one of the most sincere and genuine people that I have met. He is wonderfully friendly and has a very calming demeanor." His senior year, Benny was the recipient of one of the Fides Awards, where seniors honor peers whom they identify as unsung heroes.

Shaffer studied Chinese for four years with Ms. Shao, sometimes cooking, sharing dinner and conversing with her on campus. Charismatic and nurturing, the retired teacher remains a mentor whom he visits when he passes through Shanghai, where she now spends half of her year.

At Columbia University, he completed his undergraduate thesis, which discussed the history of the visual anthropology program at Yunnan University, as well the rise of independent documentary production and exhibition in Yunnan. In the summer of 2008, he met Yi Sicheng, the director of Yunfest, a famous independent film festival in China. Shaffer soon was hanging out at the offices of Yunfest watching videos in their screening room. "They were young and very excited about the curatorial work they were doing," he said of the Yunfest staff. "Their perspectives were illuminating. They introduced me to an emerging canon of Chinese independent cinema."

Although China has often been represented as an enormous, monolithic culture, the documentaries Shaffer watched from the Yunfest archive painted a more complicated and diverse picture of contemporary life in China. In his undergraduate thesis, Shaffer became interested in the notion of "vanishing cultures," as anthropologists in Yunnan used the term to describe the impact of tourism on communities of ethnic minorities. It seemed to parallel anthropological movements in early twentieth-century North America, which sought to document and preserve indigenous cultures that were seen as vanishing. His thesis tried to grapple with the question of why anthropologists analyzed changing cultural practices as though they were no longer living and belonged in a museum. "I find it problematic to say that someone's culture is vanishing or dying when it actually might just be changing into something else," he argued. "I wanted to see where the agency of people living in these communities fit in."

After graduating from Columbia in 2009, he returned to China on a prestigious Fulbright Research Fellowship, studying community-based video projects in rural Yunnan Province. In these programs, cultural heritage organizations trained villagers to use hand-held video cameras to capture the rhythms of daily life in their communities.

It was on this trip to China in 2009 that he encountered another distinct community — the performers at The Kingdom of the Little People in Kunming. The little people gave theatrical performances at the park for tourists. During breaks, Shaffer would get to know them and learn about their backgrounds and experiences. They, in turn, were fascinated by the young man from America who spoke Chinese so well.

For part of three summers, he hung out with them, watching TV, playing cards and learning about their lives. "On one level, they were being exploited and being put on display," Shaffer said. "But it was complicated, because the performers would struggle and fail to find work elsewhere, and these jobs at the theme park gave them a bit of security, even if they received very low wages."

After Shaffer gained their trust, the performers allowed him to make a video about their lives. In one scene, he shows two little people cleaning vegetables. Other times, the camera follows them inside their cramped dorm rooms or on stage during a fantastical performance. The tempo of his video is deliberately slow, capturing their feelings of isolation and the monotony of their daily routines.

He let the subjects watch his video. "Most found it boring. Some found it funny. Some found it moving. There was a range of reactions," said Shaffer, who plans to visit them on return trips.

Not every filmmaker or researcher finds lasting friendship during the process of doing fieldwork. But Selvaraj said, "Benny's warmth, I'm sure, helped him form immediate bonds with many individuals. He makes friends quickly, which is not always easy in a foreign country."

After his Fulbright year, Shaffer remained in China and became a translator and editor for LEAP, the international art magazine of contemporary China in Beijing. While working at the magazine, he wrote stories about independent cinema and film schools - articles that were translated into Chinese.

In 2011, he enrolled at Harvard. After two years of coursework, he is a teaching assistant with a demanding workload, but he also finds time to play drums in a band called Silkies, who will be performing this March at a radio station's showcase in Austin, TX during South by Southwest.

Recently, he organized a traveling exhibition of films from Yunfest, which brought several new and innovative cinematic works to academic institutions in the U.S. Although Yunfest was cancelled this year, due to complications with local authorities in China, Shaffer helped bring the festival's head curator and two filmmakers from China to Harvard, as well as to UnionDocs in Brooklyn, NY.

Shaffer said, when talking about the recent Yunfest programs in the U.S., "The organizers of Yunfest work to curate a program that showcases innovative cinematic approaches, not just films about relevant social issues in China. They create an open platform for people to engage with larger questions about how cinematic tools are used to express the filmmaker's vision of the world, as it is, or as it can be imagined."

In graduate school, Shaffer teaches and does research in Cambridge during the school year and returns to China during the summers to do his fieldwork. Of conducting his interviews in Chinese, he said, "I am fluent now, but I see learning Chinese as a lifelong project. I keep learning new idioms and expressions."

Flying between the two countries, he experiences culture shock — but usually on the return trip home, especially when he goes from a country of 1.3 billion back to his tiny hometown to visit his parents and his sister.

He has started two new anthropological projects, one in each country. In China, he works with traveling performers, some of them tightrope walkers of Uyghur ethnicity, a Muslim minority group who live on the far northwestern edge of China. He's also studying Uyghur language, which is closer to Turkish than Chinese. Closer to home, he is working on a project in Braddock, Pa., which is a portrait recorded on 16mm film about how people relate to landscape in a once booming steel town.

Whether he's working on projects in the Mon Valley or in the hinterlands of China, anthropology both expands his world and makes it seem more connected. "With anthropology, you get to spend extended periods of time with people," he said.

"You think of things from the perspective of others, and get a sense of what they value and what they care about. They're often the same things we care about — having a stable job, having a partner of some kind, having friends and community and good food. There is so much overlap."