Ben Portman '03: Bringing It All to The Table 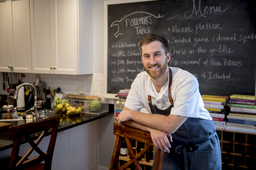 One evening in fall 2012, Ben Portman came home from his job as a financial manager, took off his tie, rolled up his sleeves and let his culinary imagination fly. He whipped up a dish of pureed parsnip, sautéed kale and pan-seared scallops. For his finishing touch, he sculpted a candle out of bacon fat. When his dinner party guests took their seats, he lit the candle and the bacon fat drizzled over the dish, setting off a chorus of ooohs and ahhs from his friends.

The dripping bacon fat and other photos of that meal became part of his audition for the 2013 season of the hit competitive cooking show, Top Chef.

The interviewer praised the scallops à la bacon-fat candle as "insanely whimsical and outrageous." But in the end, Portman didn't make the cut to compete on the show. "You're a financial planner. Not a chef," the interviewer told him.

It's true – Portman is a Certified Financial Planner and a financial planning specialist for Morgan Stanley Wealth Management. But he also has a lifelong passion for cooking, and Top Chef added kindle to that fire. While he doesn't own a restaurant, Portman is the co-founder and executive chef of Porkman's Table, an Atlanta supper club that host private events and auctions off inventive meals to small groups and donates the proceeds to charity. A growing number of supper clubs have sprouted in this southern city, offering diners an intimate experience they can't find anywhere else. Not only has Portman found a following in Atlanta's underground food scene, he received national acclaim when he took third place on the Food Network show America's Best Cook.

As a financial planner, Portman pores over numbers and investment portfolios during the day – on weekends, he makes dishes such as monkfish over leek risotto and fennel ice cream. "It is quite an unusual double life," he said.

Running a supper club has freed him from the relentless work schedule it takes to own a restaurant. Instead, he and his friends serve elaborate five-course meals to small groups.

"Ben is super creative. There is always something mind-blowing on the plate," said Jason Assenmacher, a chef at Porkman's Table. For example, he said, a dessert might have fruit caviar or some other equally unexpected touch.

Portman, 32, draws inspiration from the many cookbooks stacked throughout his bungalow in Atlanta. As he once told a diner, "I read cookbooks like some people read novels."

He learned to cook the old-fashioned way – in the Fox Chapel home where he grew up, he spent time with his mother in the kitchen. At age 4, during a family vacation, his eyes widened as he watched a hotel chef work the omelet bar at the end of the buffet line. "It was the coolest thing in the world," he said.

Once, when his mother told him to make his own breakfast so she could sleep in, Portman didn't pour a bowl of cereal. The little boy made an omelet. He served breakfast in bed to his parents, who were delighted by the sweet gesture – until they saw the royal mess he'd left in the kitchen.

As he grew up, he branched out to pasta dishes, meatloaf and traditional Pittsburgh favorites like pierogis. He watched cooking shows such as Iron Chef, and in high school, he even sat in on classes at Le Cordon Bleu Institute of Culinary Arts in Pittsburgh.

Only a block away from Shady Side Academy, Portman attended the school from kindergarten through 12th grade. Looking back, he realized how the school shaped him. "It wasn't just learning the content. It was learning how to think, how to learn, how to communicate with people. The idea was to think about the big picture on things."

He liked physics and biology and other science classes, but he also explored the humanities. He doubled up on English classes his junior year, taking six in two terms. "There was always freedom and flexibility to study what interested you, whether it was drama classes or walking around campus writing poetry."

After graduation, Portman attended Bucknell University, where he majored in economics. "It helps you understand human interactions and why things happened. That kind of deep, heavy lifting enthralled me."

He also worked in restaurants near the university in Lewisburg to earn money as he continued to refine his cooking skills.

At Bucknell, he started a fraternity and then became president of the Interfraternity Council. He did an internship with Brian Mitchell, president of the university from 2004-2010. The experience was so valuable that Portman founded an executive internship program in which students would work under senior administrators at Bucknell.

His senior year, Portman received plum job offers from Lehman Brothers and Bear Stearns. It was the reward for all of his hard work.

Imagine his surprise when president Mitchell called him into his office and encouraged him to decline the offers.

"Wall Street will always be there," he recalls the president telling him. "This is the only time in your life you can do something out of your comfort zone."

He took Mitchell's advice and deferred his Wall Street plans. He decided to take the opportunity to join Teach for America.

When he got his assignment, he moved to Arizona, where he taught middle school science in a school with predominantly low-income students.

When he walked into the classroom on the first day, he was terrified by the 25 young faces staring back at him. But he quickly established himself as a disciplinarian and earned their respect by challenging his students beyond science facts. "Learning the layers of the earth is inconsequential unless you want to become a geologist. I tried to give them what I got at Shady Side, teaching them to question things and proving and disproving a thesis."

He also made an effort to connect with his students outside the classroom by coaching several sports. "I found out what made them tick and their world view. It helped them widen their opportunities."

From 2007-2009, he continued to teach as he earned a master's degree in secondary education and teaching at Arizona State University. "It was a truly life-changing two years," he said.

Mitchell's advice was on target. He loved teaching, and it was hard leaving his school, but the time had come to give Wall Street a try.

Portman landed a job as a financial planning specialist at Morgan Stanley in Atlanta in 2009. "It was quite a change of pace. But my job is still helping people. I help people make plans for their future and help people with concepts that are foreign to them."

Living by himself, he rarely cooked. But his friends had not forgotten his creativity in the kitchen. When they heard about a Top Chef tryout in Atlanta, his friends signed him up. When he didn't make the cut, he was partly relieved because he knew his kitchen skills were rusty. "I would have embarrassed myself," he said. Even so, the experience of making his one-of-a-kind scallops dish reignited his passion.

He set out to improve his culinary skills, staging as a line chef and taking every opportunity to introduce himself to well-known chefs in Atlanta.

They told him about the underground supper club scene in which the host uses his own kitchen and opens his home to a small group of paying guests. Initially, Portman and a few other friends put up a website and sent some emails to spread the word, and voilà – diners came to his home. "It was a pop-up restaurant in my house."

A glowing review in an email blast increased the email list from 40 to 400 recipients overnight. "All of a sudden, strangers were coming to my house." As word spread, he and a staff of five others would host supper club dinners and private parties on Saturdays and Sundays, working every weekend.

Then in 2014, Portman got a call from America's Best Cook, a show on the Food Network. His bosses at Morgan Stanley were kind enough to let him take time off from the business world to follow his cooking dreams.

The first day of the competition, he and 15 other contestants were introduced to their celebrity mentors. Portman was thrilled to find himself standing beside Cat Cora, the chef he had grown up idolizing on Iron Chef . For the first round, he and 15 other contestants were sent to Kitchen Stadium, where half of them would be eliminated the first round. The pressure inside the kitchen was on, as chefs had to complete dishes in 30 minutes.

Cora taught him about organizing food and utensils and how to deconstruct and reconstruct a dish. She also taught him about a chef 's swagger. "Chefs have a rock star mentality when they cook for other people," Portman said. "I would be timid and apologize if someone didn't like what I made. She taught me how to stand behind my food."

Week by week, Portman kept winning – all the way to the finale. Whitney Portman, his wife, and his other relatives and friends cheered him on at a barbecue restaurant back in Atlanta, screaming at the screen, cheering on his third-place finish. She said he was a fan favorite. "He is a lovable and personable person," she said.

When he came home, he brought his sharpened culinary skills back to the supper club.

If Chef Gordon Ramsay's famous temper and meltdowns are on one end of the emotional spectrum, Portman's steady demeanor is the opposite. "Ben is as cool as ice. He has cut the tip of his finger off multiple times," Assenmacher said. "He has no time for stress and negativity."

Payne Midyette, co-founder of Porkman's Table, added, "One thing about cooking is that something always goes wrong, usually at the worst possible time. Ben can adapt to everything that happens." When the oven wouldn't turn on before one dinner party, Midyette started to panic. But Portman calmly told his crew to start preparing the meal on a grill outside. The dinner guests raved about the smoky flavor of the roasted tomatoes.

Portman also has taught himself to make desserts, one of the highlights of his meals. He reverse-engineered the famous burnt almond torte from Prantl's Bakery in Pittsburgh to make his own version, and he serves up ice cream in flavors like sweet potato and fennel.

In 2013 and 2014, Portman and his crew were in the kitchen most of the weekend, only to be back at their fulltime jobs on Monday morning. They were starting to burn out. They had two options: scale up and start a restaurant or scale down and do dinner parties once or twice a month. They decided on the latter and now will book the entire table for private events, and auction off meals once or twice a month. They have raised $150,000 for charities ranging from Wounded Warriors to others that benefit breast cancer research and children with terminal illnesses.

Portman never repeats a meal for his supper club parties. He recently made toasted barley and octopus consommé, serving it with halibut, potato-stuffed pasta and spring vegetables. "It was outstanding. I would put it up against anything I've made."

But who knows – maybe next month, he will outdo himself again. He is already planning a 10-course meal around bacon and ham, an ode to Southern cooking.

As Whitney said, "It's great to see him use the creative side of his brain that he doesn't get to use every day. When he's in the kitchen, it elicits a spark in him."