In 2017, Sloane (Berrent) Davidson '97 was making regular runs to Pittsburgh International Airport to pick up refugees who had been forced to flee Syria, Afghanistan, Myanmar, the Democratic Republic of the Congo and Bhutan. She was the first point of contact for families arriving in a bewildering new world, often after spending years in refugee camps. Unable to speak English, they looked totally overwhelmed as they peered out of the car window on their way to new apartments in a new city.

Through her part-time job at a resettlement agency, Davidson learned that federal laws provided new refugees with 90 days of support. But starting on day 91, the refugees were on their own.

Thinking back on her own life, Davidson knew it had taken her more than 90 days to get settled into a new city – and she was born in this country and grew up speaking English. How much harder it would be for a refugee without any family support or familiarity with the language? "After three months, their heads were still spinning," she said.

At the same time, Davidson befriended a Syrian family she had met in her Highland Park neighborhood. She invited them over for a big Thanksgiving dinner, and then family birthday parties, and eventually her family went over to their house for a meal. As their friendship deepened, she became their American family. She started telling her friends about her experience, and they asked how they could do something similar.

Unable to find an organization that did this, Davidson founded her own nonprofit called Hello Neighbor, which provides mentorship to refugees resettling in Pittsburgh.

Hello Neighbor pairs volunteer mentors with newly settled refugee and immigrant families to help improve their lives. Mentors receive training on refugee resettlement and English as a second language (ESL) while being matched with an experienced mentor for guidance.

Volunteer mentors help new refugees and immigrants with tasks such as writing checks, finding a new apartment and enrolling in an English class. Life skills are mixed with fun activities to make the new neighbors feel less socially isolated. They might go on an outing to a local park, attend a Hello Neighbor event or share a holiday dinner. Each family compiles a set of goals, and the mentor helps them work through it. "Really, there's no goal too big or too small," Davidson said.

In just three years, 122 volunteers have worked with refugee families from 13 different countries and provided more than 5,000 hours of mentoring.

"We're not a social service agency. We're not social workers," Davidson said. "Often what they need more than anything is not just a mentor, but an ally and advocate, a friend, a supporter. And ultimately, the mentor becomes like their American family."

In recognition for her founding of Hello Neighbor, Sloane was named a 2020 Presidential Leadership Scholar. The 2020 class includes 60 leaders across the country spanning many fields – physicians, public servants, scholars, corporate leaders, nonprofit executives, etc. The goal is to bring people from diverse fields together to make a difference in the world as they learn about leadership through the bipartisan lens of the presidential experiences of George W. Bush, William Jefferson Clinton, George H.W. Bush and Lyndon B. Johnson. They will visit all four presidential centers next year, with plans to meet former presidents Bush and Clinton.

"It's a tremendous honor," she said. "It's been transformative as far as the leadership skills that will help me grow as a leader and ultimately grow Hello Neighbor and impact the Pittsburgh region. It speaks to how much the former presidents value bringing together people with different backgrounds and different interests with a common goal of making the world a better place."

This past year, she was named a Woman of Influence by the Pittsburgh Business Times, a Woman of Achievement by Cribs for Kids, and was named Top 40 Under 40 by Pittsburgh Magazine in 2019.

Hello Neighbor aims to break the feelings of social isolation for new refugees. That task became much more complicated this spring during the COVID-19 pandemic, after the state enacted social distancing measures to prevent the spread of the novel coronavirus.

"We've always said the phone is the hardest medium when you are learning a new language," she said. "It makes it incredibly challenging to help them navigate American systems and customs from afar. Our whole program is built around breaking social isolation, and doing it remotely changes everything."

"We just had a Mentor Town Hall on Zoom to check in. We launched a Refugee Assistance Fund recently, which is a cash assistance program to get some cash in the hands of families to help them pay for rent, utilities and food. New partnerships with local organizations have helped us navigate issues like food insecurity and supporting new moms with baby essentials. We have also worked with school districts on computer distributions and online tutoring resources. We have weekly distributions happening since the quarantine began that include delivering masks, food, book, new baby needs and craft bags. It's really important to provide some kind of supplemental support. I'm still keeping everything going, just from a distance."

Davidson arrived at Shady Side Academy in 10th grade as a seasoned volunteer.

No one ever told her she should do it. She just wanted to do it. "I always knew that I had a heart to help people," she said.

As a new student in the Senior School, she wanted to help other students get involved too. Some seemed eager to try it but seemed unsure how to go about it. "You don't have to do something forever," she told them. "You can just try something and see if you like it."

Davidson soon seized the opportunity to get students involved. In the summer before her junior year, she worked with student leader Chris Ward '96 and history professor Carol Wilson on organizing the first Shady Side Academy Day of Caring – years before many corporations held such events. They spent summer days calling senior centers, animal shelters and nonprofits and finding service projects where students could volunteer. It was a massive undertaking, and Ward and Davidson stepped up, said faculty advisor, now Carol Wilson Gonzalez.

"Sloane was wonderful to work with," Gonzalez said. "She was very active in all things community-service oriented."

The event, held her junior year, was a big success.

Sean Gray '97, her classmate and fellow volunteer, said Davidson had the same passion for service even as a teenager. "She was very outspoken and determined to get her voice heard on behalf of others. One of her strengths is to say why it is so important to get others involved and garner that support in ways that are impactful for people in need."

At Shady Side, she not only brought her volunteering spirit to the school, but she also flourished academically, exploring various disciplines. "Shady Side really helped me develop a sense of independence," she said. "I loved the English electives, the ability to choose what you are learning about."

After graduation, she received a bachelor's degree in political science from the University of Vermont. Then she spent the next 15 years traveling around the country and the world. In 2009, she was named a Kiva Fellow, a volunteer position in which people learn firsthand about microfinance and social enterprise by going into the field. Through the program, she traveled to the Philippines, where she worked with a host microfinance institution. She also got involved with development projects in the Democratic Republic of the Congo, Ghana, Haiti, Guatemala, Ecuador and the Philippines.

From 2008-2015, she wrote a blog, The Causemopolitan, focusing on cause-based topics. She posted a Giving Manifesto that started: "Give a little. Give a lot. Don't feel guilty for what you can't do. Feel empowered for what you can."

Her travels to remote, impoverished areas in developing nations made her realize what refugees gave up when they came to the U.S. – tight-knit extended family and village support.

In 2016, six months pregnant with her first child, she and her husband returned to her hometown of Pittsburgh so she could be near her own family and support system. 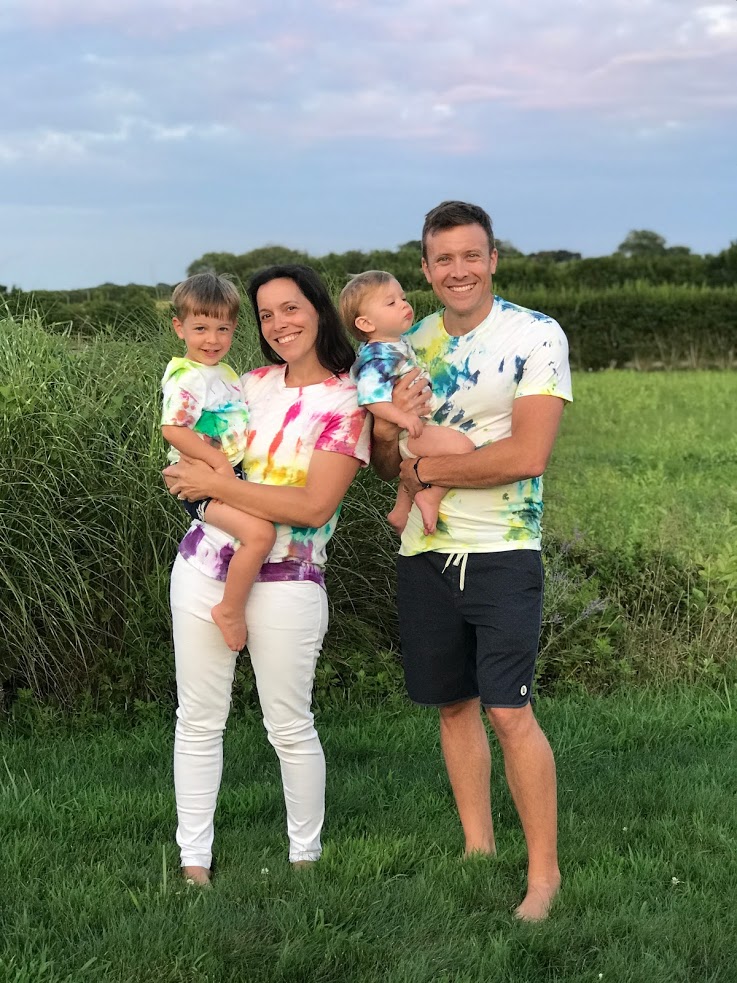 She pursued a master's in public policy and management from the University of Pittsburgh's Graduate School of Public and International Affairs and told her professors she wanted to concentrate on immigration issues. In 2016, she started volunteering part-time at the former Northern Area Multi-Service Center, a resettlement agency that has since closed.

The idea for her own nonprofit became a reality when the Heinz Endowments gave her a grant for a pilot program. Another early funder was the U.S. arm of the United Nations High Commissioner for Refugees (UNHCR), a national and international funder.

On April 27, 2017, she graduated from Pitt with her master's degree and started Hello Neighbor the very next day.

The population she helps are true survivors. Only about one percent of the world's refugees are resettled from an asylum country to a third country. "Refugees who have made it here are incredibly resilient," she said. Our refugee families have been in Pittsburgh between six months and five years - some have started their own businesses or are buying homes." Still, 100 percent of the families Hello Neighbor assists are below the poverty level, and many have young children at home.

"We have had 17 new babies that have been born in the last two and a half years," Davidson said. "These mothers are all giving birth here in the U.S. for the first time. And anyone who's a mom knows it's a scary process to navigate, even if you understand the language and the culture. Doing it without that can be really daunting."

Davidson believes that helping people is a skill she has built up over the decades of her career. "I've always felt like giving back is a muscle, and it's a muscle that strengthens over time. I just happened to start my giving-back muscle really early, and I've spent a lot of time cultivating it."

"I think that I've always just been really aware that ultimately we're just all human beings, and chances are, everyone's trying to do right by themselves, by their families, by their communities. I think I've always felt that, you know, sometimes someone else is going to need a little bit of extra help. And one day, it might be me – and if it's me, hopefully someone will give me a little bit extra help. So I think that's the way we all help each other and what makes the world go round."