Like many brothers, Jordan and Grant Foley grew up as equal parts good friends and fierce competitors. The boys would go head-to-head in basketball, football and baseball — each win or loss was another round in their never-ending game of one-upmanship. Jordan, the more serious one, was four years older, but Grant was determined to keep up and scrappy enough to hold his own.

When his sons would approach him and ask who the better athlete was, Jeff mustered his paternal diplomacy. "Jordan is better at football and Grant is better at baseball. Grant is a better offensive player and Jordan is better defensive player."
As high school students at Shady Side Academy, they both lettered in football, basketball and baseball. Their father, Jeff, who was the JV coach for all three sports at various times, coached both his sons.

The brotherly rivalry and good-natured banter have never let up. But instead of the court, the field, or the rink, the Foley brothers have taken the quest to distinguish themselves to their military careers.

Jordan, 30, a graduate of the U.S. Naval Academy and Massachusetts Institute of Technology, just completed six years as a submarine officer in the Navy. The lieutenant has been accepted into the Judge Advocate General's Corps (JAG) so he can become a military lawyer. He will start Georgetown Law School this fall.

Grant, 26, a graduate of the U.S. Merchant Marine Academy, is a Navy pilot. He is completing his advanced flight training on multi-engine planes from his post in Corpus Christi, Texas.

Kicking off the latest round of brotherly banter, Grant said, "I'm in a plane, which means I can hunt down a submarine. I'm up in the air while you're under the water."

The future military lawyer gives it right back to his little brother. "Maybe I'll defend you someday."

But Grant will not be outdone so easily. "You can't handle the truth," he said, a reference plucked out of A Few Good Men, the 1992 film in which Tom Cruise plays a military lawyer.

Jeff Foley said his two sons' quips are all in good fun, and the brothers are best friends who always have each other's backs. As he puts it, "It never ends. They give it to each other every day and then they wish each other the best."

Growing up in Butler, Grant always wanted to be like his brother, even if it meant skipping out on the latest hit Disney movie and other activities with kids his own age. When the boys weren't competing in sports, dribbling on the full-size basketball court in their yard, they played with G.I. Joe figures and model planes and ships. But they had no dreams of growing up to be sailors or military pilots. 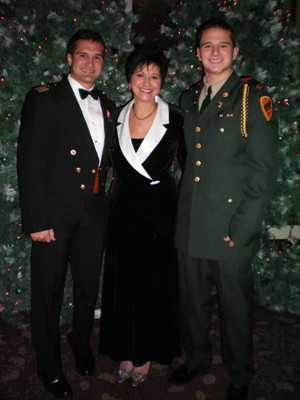 In fact, they might be in entirely different careers had Jordan not transferred to Shady Side in sixth grade. In recognition of Middle School graduation, the eighth-grade trip was scheduled for Toronto, but those plans were scrapped because of an outbreak of severe acute respiratory infection (SARS).

At the last minute, the school changed the trip destination to Annapolis. For Jordan, visiting the U.S. Naval Academy was the standout experience of the trip. He was transfixed by the men and women in crisp uniforms marching along the bricks walks winding around the stately buildings. "They all looked so professional. They looked like they had their heads on straight. I fell in love with it."

From that day on, he knew exactly what he wanted to do.

He also knew that admission to the U.S. Naval Academy was highly competitive. He had always been driven, carrying a planner for his homework assignments as a boy, but transferring to Shady Side sharpened his academic skills and focus. "I loved it there," he said. "Looking back, I think the best thing that came out of it was my writing ability. That really set me apart in college. We had to write a paper every week in Middle School."

In Martha Banwell's eighth grade English class, he learned how to structure an essay. In high school, another favorite English teacher – and future father-in-law – Jeff Miller showed Jordan how to take his writing one step further. "He put an emphasis on really diving into literature, something I enjoyed," Jordan said. "He taught us to see how great authors write and then develop our personal styles."

Miller remembers young Jordan as an excellent writer and highly motivated student who often handed in his papers early. For one assignment, Jordan not only turned in his paper on time but followed up with a second composition, just for good measure.

The English teacher got to know him better when Jordan started dating his daughter, Katharine. The couple, who married in 2015 with Grant as the best man, started dating when he was a senior and she was a junior at SSA.

The first time Jordan applied to the Naval Academy, he was rejected. And disappointed. He attended Case Western Reserve for a year before reapplying, and then he was accepted to his dream school.

Once he got there, it took a while to get used to the regimented lifestyle. "A lot of people think, 'What did I get myself into?' If you just wanted to go out and grab a burger somewhere on a Thursday night, you can't leave campus. You can only leave on weekends. It's not the college life that you see all your friends having on Facebook. But as soon as you buy into the system, it's really a great place."

Being apart from Katharine was difficult. During basic training, cell phones were not permitted and he could only write letters. The fact that their relationship endured his years at the Academy made them part of what is jokingly called the "the two percent club," the small minority who leave the Academy with their romantic relationship intact.

He excelled, graduating first in military order and 12th in academics. That ranking meant the Navy helped to pay for graduate school at Massachusetts Institute of Technology, where he studied political science and technology policy. In his class on technology law and public policy, he did so well that the professors, two attorneys, told him that he should consider a career in law.

But before he could consider the suggestion, he spent six years as a submarine officer. After attending nuclear power school in Charleston, he reported to the USS Annapolis, a 362-foot long fast-attack submarine used for intelligence, surveillance and reconnaissance.

He likens life on a submarine to a cross between the movies The Hunt for Red October and Office Space – moments of sheer excitement interspersed with the tedium of filling out reports.

"It will beat you up pretty good. You're always at work - 12-hour shifts are standard. It teaches you how much you can push yourself."

Jordan is excited about his next chapter in the military – attending law school at Georgetown, which will allow him to spend more time with Katharine and their baby daughter, Aida.

He said the JAG Corps will open the doors to all types of legal assignments, from representing Sailors and Marines accused of violating the Uniform Code of Military Justice to environmental law to international law. "The career path for a JAG is really interesting and broad. And you get to see the courtroom right away."

Grant Foley was known as the more laid back, fun-loving brother, but he became more serious about his studies when he transferred to Shady Side Academy in high school. "It was the best choice of my life. The teachers there were awesome."

He also developed as an athlete and person under the leadership of many coaches, including baseball coaches Bob Grandizio Jr. and John Cappa, and football coach Dave Havern. "They taught me leadership and how to work hard on and off the field. They were all great role models. They always took time to know each individual player."

Jeff and Kathy Foley attribute the success of both of their boys to the discipline they developed at SSA. "If we had to do it over, we would do Shady Side Academy again, no matter what the cost. They really made those two boys into men. They both worked very hard and developed great study habits and they have great careers ahead."

After high school, Grant attended the New Mexico Military Institute, a feeder school for the Merchant Marine Academy. He was accepted and awarded a baseball scholarship at the academy.

Majoring in marine transportation, Grant went out to sea for a year, sailing off southeast Asia. He worked as a deck cadet from 4 to 8 a.m., standing watch on the bridge, and learned navigation via radar, GPS, the sun, moon and stars. In the afternoon, he would work on the decks, chipping rust and painting and organizing cargo for loading and unloading. During his time on three different ships, he sailed through the Panama Canal and visited Hawaii, Guam, Canada, Philippines, Singapore, Japan, Okinawa, South Korea and Thailand.

From the time he was in college, Grant knew that he wanted to spend his career in the air, not on the waves. He was accepted to flight training school for the Navy, where he did simulation training before flying T-6B planes. He loved the thrill of following another pilot as they performed acrobatic moves in the sky, the G-forces so high that his vision clouded up. "My vision went gray. But you clench your core and you squeeze your legs and your vision comes back." Now 6 feet tall, three inches taller than his older brother, he approaches aviation like a sport, working out every day.

His father sends him emails before his flights. "Godspeed. Get a good night's sleep. Be prepared. Email us how your flight went."

As Grant said, "My risk is more life-threatening and Jordan's is more mental. He found a way to get what he wanted, like law school, no matter how tough it was."

Grant said he will have the option to transition to the commercial airlines after serving as a military pilot.

He likes the freedom and the responsibility of being a pilot. "With flying, it's just you and a copilot in charge. You learn how to make critical decisions in split seconds."

The only problem with their far-flung military careers is that the Foley brothers only see each other a few times a year, the last time being during Christmas at their childhood home in Butler. But when they get together, they pick up the basketball or football and head outside – the competition is on. 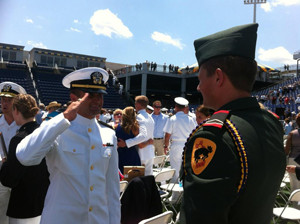 Last Christmas, they played a one-on-one basketball game, with Grant's girlfriend, Erin, acting as the ref. "I totally dominated him," Grant said.

But there was a good explanation for the lopsided score. Inside the cramped quarters of the submarine, Jordan couldn't work out and pack on muscle on the submarine, while Grant was lifting and exercising every day at flight school.

Jordan turned to his little brother. "Must be nice to be a pilot and only work one day a week."

By Christina Rouvalis Photography Provided by Jordan and Grant Foley