There are no news posts to display
Doug Henry '87: Innovating Solutions for Delivering Mental and Behavioral Health Services
Mar 7 2022 2:52 PM

The man had been living on the street, his clothes ripped, his appearance bedraggled, his behavior erratic. Police picked him up at the park and brought him to an inpatient psychiatric unit at the Santa Barbara Cottage Hospital, where Dr. Doug Henry was working as a clinical psychologist. The man told the clinical staff that he was an A-list director who had made movies that everyone in the room would know. Henry and the rest of the staff wondered if this was merely a delusion of grandeur in someone having a manic episode. After all, the man didn't look like Hollywood royalty. Given the circumstances under which he was brought in, it seemed unlikely. "But it turned out to be absolutely true," Henry recalled.

Once the director received treatment and started taking his medication regularly, he became more stable and was able to live independently again.

Henry learned an important lesson as a young clinician seeing a diverse roster of patients, from low-income people to A-list Hollywood celebrities. "You never understand where someone is coming from. Mental illness doesn't care about money. It is an equal opportunity challenge against all demographics."

Though those early experiences made him an empathetic clinician who believed in the transformational power of therapy, he wanted to find a way to reach a greater number of patients.

"On a good day as a professional psychologist, you could treat seven or eight people. Maybe you could provide meaningful help to six of them. Seeing what was going on in Southern California at that time, it became clear to me that this was a drop in the ocean. The need was so huge. Here I am working really hard and maybe touching half a dozen people a day. It felt like it wasn't enough."

With that goal in mind, he pivoted into mental health administration, creating quality standards and treatment plan protocols for mental health services. After four years as clinical supervisor at Santa Barbara County Alcohol, Drug and Mental Health Services, he moved back to Pittsburgh, where he has overseen mental health care at the highest levels.

As vice president of psychiatry and behavioral health at Allegheny Health Network (AHN), Henry is innovating solutions to help people with mental health treatment in the middle of a pandemic, when anxiety and depression rates are spiking.

"We see an increase in OCD (obsessive-compulsive disorder), eating disorders and generalized anxiety disorder," he said. "It is difficult to access good services right now because of the demand."

One positive of the pandemic is that the stigma of seeking mental health treatment has decreased, especially for young people, he said. With celebrity sports figures such as Simone Biles, Naomi Osaka and Michael Phelps talking openly about their mental health struggles, it is now more acceptable to reach out for help, the same way we do for our physical health.

"Mental health hygiene is just a routine aspect of whole person care. It's just what you have to do to take care of yourself. The extraordinary pressure and stress of the pandemic has caused a decrease in stigma because the need for mental health support has become so common," he said.

But while the stigma has decreased among young people, it persists among people over 25, Henry said. "We see people who are in need of services but see it as a sign of weakness or incompetence." Some also worry that it could endanger their professional careers.

As an executive at AHN, Henry starts new programs to meet emerging needs, monitors the quality of services and hires therapists, among other duties. Because of the pandemic, the health system now provides 70% of its mental health services via video or phone – a trend that is expected to continue even after the pandemic. Allowing patients to talk to a psychologist or psychiatrist from the comfort of their home means fewer cancellations when someone can't access a babysitter or transportation.

"Doug has the best business mind of any behavioral health executive I've ever known," said Anthony P. Mannarino, director of the Center for Traumatic Stress in Children and Adolescents at AHN. "Most psychologists are very competent in thinking about individual patients or individual programs, whereas Doug thinks with a much broader, longer-term vision about how to expand the scope of what we do and how they're all interconnected." Mannarino said Henry has increased the number of outpatient sites offering behavioral health services and also broadened the scope of outpatient treatment options for people who are acutely ill.

Improving mental health services not only helps people cope with the challenges of their lives, but it also drives down the overall cost of health care. If someone has an anxiety disorder and they don't receive treatment, they might start having panic attacks. They may go to the emergency room under the mistaken impression they are having a heart attack. "They are having MRIs, and being checked for pulmonary embolisms," Henry said. "If we can provide more effective behavioral health care, we're going to save oodles of money.

He also has overseen AHN's new mindfulness program for schools called The Chill Project. The program provides a behavioral health educator to staff a "chill room," a relaxing space where students can practice mindfulness techniques when they need a break and a school-based therapist. "We are in 19 schools currently, and it's caught on like wildfire the past two years."

The Chill Project debuted this year at Shady Side Academy Senior School.

"Doug is an innovator, an industry leader," said Senior School Counselor Creighton Runnette '89. "He's also a parent. He's an alum. He knows our community well, and he has been a trusted resource."

Henry enrolled at Shady Side in Middle School when it was still all-boys, and immediately took to the discipline and the academic rigor. "I thrived within the structure and order," he said. "I also had a lot of fun."

At the Senior School, he was inspired by many of his teachers, including English teachers Phil Entres and Jeff Miller. "They were big influences," he said. Another fond memory is playing ice hockey on the pond with Dick Gregory, the late English teacher who was known for being great fun outside of the classroom. "I remember him for his youthful approach and the way he cared about winning. He was just like another kid out there."

Henry also played golf, squash and lacrosse, and the talented athlete had to decide which sport to concentrate on when he went on to Dartmouth University. He ultimately opted to play on the squash team.

Henry double majored in psychology and religion. Psychology had always intrigued him because a member of his family suffered from mental illness, and he was motivated to help others overcome problems that incapacitated them.

He also developed an interest in human behavior as political divisions flared over the first Gulf War under then-President George H. W. Bush. The same arguments playing out on the news were breaking out on campus.

"I was looking at all of the friction between people on an interpersonal level. I wanted to understand what motivated behavior," he said. "There was also a lot of divisiveness between men and women, because Dartmouth had a long history of sort of macho, male-oriented behavior. Dartmouth was the last Ivy League college to go coed. I think women were made to feel unwelcome" in certain places.

He earned a master's in psychology at Duquesne University in 1994 before earning a doctorate in clinical psychology at Pacifica Graduate Institute in California.

After working in California, he moved back to Pittsburgh in 2006 to take a leadership role at UPMC/Western Psychiatric Institute and Clinic (WPI). He started as the clinical administrator for child and adolescent psychiatry and led teams working with children with autism, eating disorders and other conditions at both Western Psychiatric and Children's Hospital. He emphasized integrated behavioral health, embedding psychologists and psychiatrists into primary care practices. In 2017, he became a vice president at AHN. 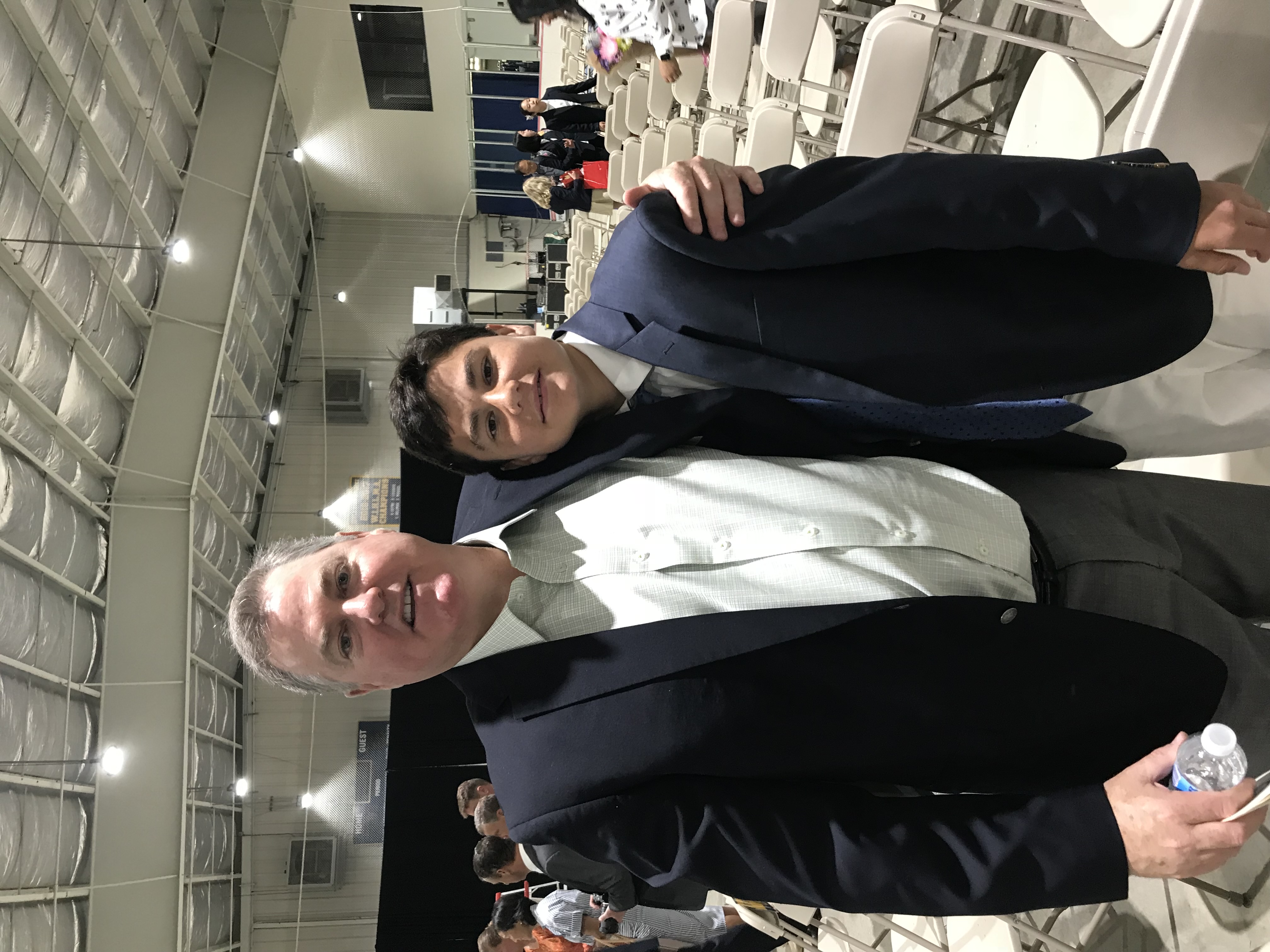 With the explosion of social media, Henry has watched adolescents struggle with anxiety and depression as they compare themselves to everyone else's carefully curated and airbrushed lives online. "Beginning in 2008, you can really see social media and smartphone usage impacting our youth. It's interesting to me that many of the tech executives don't allow their children to use social media until they're quite old. They really isolate them from technology."

He also oversees the treatment of eating disorders, which predominantly affect females, but with a growing number of males. Twenty years ago, only 2% of the patients suffering from anorexia and bulimia were male. That percentage has increased to more than 10% now, he said.

Henry also has been reviewing current research on how the pandemic has hurt the social development of youth, especially young children in day care or preschool. "Even when we are not in lockdown and everyone is behind a mask, they cannot see the combination of people's facial expressions matched with their tone of voice and behavior. It doesn't allow people to develop social reciprocity and empathy. And older kids are suffering from the exact same dynamic." For example, a high school student who is worried about an exam or an upcoming sporting event can get relief by sharing a simple smile with a friend, he said.

Even though he is an administrator, Henry still does therapy occasionally. His training and experience as a clinician have made him empathetic to the therapists he oversees and open to their suggestions, said his colleague, Mannarino.

"Doing behavioral health can weigh on people. Sometimes a clinician sees depressed people all day long, and it is stressful. But Doug remains upbeat and positive. In addition to his business acumen, he brings an extraordinarily positive and enthusiastic quality to our department."