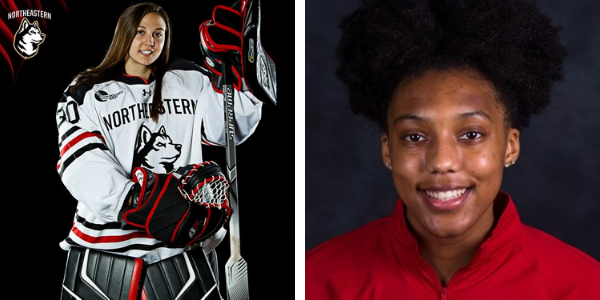 Two Shady Side Academy alumnae who used to be teammates on the SSA girls' prep ice hockey team will be competing with their college teams in the NCAA Division I Women's Ice Hockey tournament, beginning Monday, March 15, at Erie Insurance Arena in Erie, PA.

Gwyn Philips '19 is a goalkeeper for No. 1-seed Northeastern University (20-1-1). She has played in four games this season, making 32 saves and recording a 0.97 goals against average.

Chayla Edwards '19 plays defense for No. 2 seed University of Wisconsin (14-3-1). She has played in all 18 games this season, recording four assists and 38 blocks.

Should Northeastern and Wisconsin make it to the final, the SSA alumnae would face each other in the national championship game on Saturday, March 20, at 7:30 p.m., airing live on ESPNU.

While at Shady Side, Edwards and Philips helped the girls prep hockey team to three Women's Interscholastic Hockey League of the Mid-Atlantic (WIHLMA) titles, most recently in 2019.

Congratulations and good luck to Gwyneth and Chayla!