SSA Breaks Ground on McIlroy Center for Science and Innovation
May 19 2017 9:22 AM 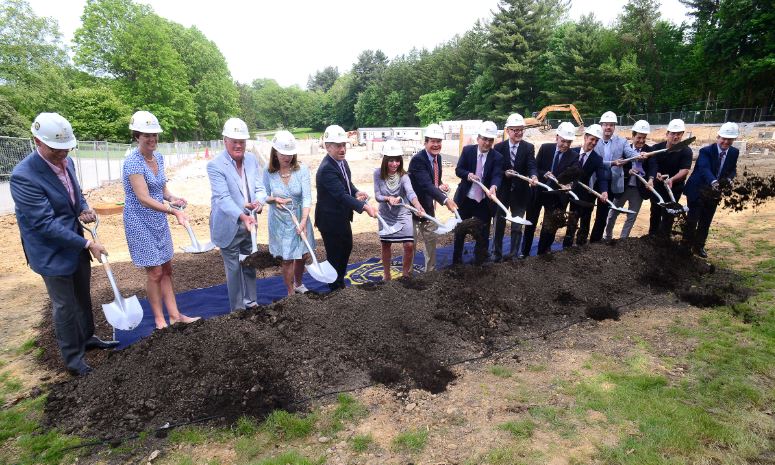 Construction is underway on the newest addition to the 130-acre Shady Side Academy Senior School campus, the McIlroy Center for Science and Innovation.

A groundbreaking ceremony for the new building was held on Thursday, May 18, and attended by lead donors, trustees, administration, faculty and students. After a welcome by SSA Director of Development Rick Munroe '84, alumnus, parent and Board of Trustees Buildings & Grounds Committee chair Jon Kamin '91 thanked the McIlroy and Wiegand families for their lead gifts to the building, and everyone who helped to make the project possible. Academy President Tom Cangiano echoed those thanks and spoke about the transformative impact the McIlroy Center will have on science at Shady Side for years to come. Finally, key administrators, donors and representatives of the architectural and construction firms donned hard hats and dug their commemorative shovels into the ground for a celebratory photo op.

The McIlroy Center for Science and Innovation

Site preparation and utility relocation work for the building began in late March 2017, and crews recently began laying the foundation for the 22,000-square foot, U-shaped, two-story building. The goal is to complete construction by summer 2018 in time for the 2018-2019 school year. The center will sit along the campus entrance drive and become the cornerstone of a new academic quad with McCune Library, Hunt Hall and Rowe Hall.

The building will feature a striking brick-and-glass design that respects the architectural style of SSA's campus while bringing new energy and state-of-the-art design features. It will incorporate sustainable features that reduce environmental impact while creating teaching opportunities: a rain garden that collects storm runoff, rooftop solar panels that supply a percentage of the building's electricity, energy-efficient windows that flood classrooms with natural light, water-saving plumbing, motion-sensitive lighting and more. The goal is to earn LEED Gold certification from the U.S. Green Building Council. The site design also includes an outdoor amphitheater that will be an ideal disciplinary space for classes, performances, lectures and events.

The McIlroy Center will house the Senior School Science Department, including 10 flexible classroom/lab spaces for physics, biology and chemistry, plus larger, more responsive spaces for research, collaboration and independent study. A special projects room will be adjacent to the faculty office suite, separated by a glass partition, giving students supervised access to research space throughout the school day.

"The McIlroy Center for Science and Innovation will enhance our inquiry-based approach to teaching science," said SSA Senior School Head Sophie Lau. "The design of the building will support students as they engage in the work of research scientists – collaborating with each other and their teachers as they collect, analyze and present data to further their understanding of the most current issues facing scientists today."

The building was designed by the architectural firm Frederick Fisher & Partners of Los Angeles. Strada is the local and construction architect, while PJ Dick is overseeing construction. Scalo Solar Solutions is handling the solar rooftop array and monitoring inside the building.

Science at Shady Side

"Shady Side is witnessing an unprecedented level of energy around science and technology, which are fast becoming distinctive strengths," said Academy President Tom Cangiano. "Our students are blazing new trails, from robotics to Science Olympiad to independent research. We have teachers with advanced degrees and real-world experience connecting the classroom to the real world of science. And our programmatic offerings have never been broader."

Despite the strength of its science and technology programs, current Senior School facilities limit how fully SSA can realize its potential. One large multi-purpose lab is shared by all science classes, often concurrently. Science classrooms are separated from the lab, making it difficult for teachers to move smoothly from concept to demonstration. Space for long-term, student-led research projects and for programs like Science Olympiad and robotics is lacking.

The McIlroy Center for Science and Innovation answers these challenges by giving teachers and students the space, flexibility, technology and resources to unlock the full potential of science at Shady Side. In addition, construction of the new building will allow the spaces currently occupied by science in Rowe and Memorial Halls to be renovated into a maker space/fabrication lab for computer science and robotics, giving those technology programs a much-needed, dedicated home.

The McIlroy Center for Science and Innovation is the final phase of a comprehensive, long-term plan to upgrade science facilities across SSA's campuses, which is one of the goals of the Academy's Strategic Vision. In the first phase of the plan, the Middle School's three science classroom/labs were renovated in 2014 and 2016, and the Junior School's one science classroom/lab was renovated and expanded into a suite of five new labs in 2015.

Fundraising for the McIlroy Center

The McIlroy Center for Science and Innovation is a $14 million capital project, including $11 million in hard and soft construction costs and a $3 million endowment for maintenance. Fundraising efforts for the building have been underway since 2015 and have raised roughly $10.3 million to date.

In 2016, a seven-figure leadership gift to name the building was received from SSA alumnus, past parent and current grandparent Peter McIlroy '61 and his wife, Pam. Three generations of McIlroys have attended Shady Side, including Jeff '86 and Erica McIlroy (parents of Ashley '15, Peter '18 and Brandon '21), and Rob '88 and Shelly McIlroy.

"The Academy prepared me well for college and for life, and Pam and I have been waiting for the right opportunity to give back," said Peter McIlroy '61. "We are proud to be part of the significant enhancement the center will provide to the school's science program for many years to come."

Additional leadership gifts to the McIlroy Center project include a $1 million gift from the Wiegand Family Foundation (by Bruce Wiegand '65 and his wife, Barbara), a $1 million anonymous gift from an alumnus of the Class of 1956, and a grant from the Richard King Mellon Foundation.

Watch a highlight video and view a photo slideshow of the groundbreaking ceremony below: