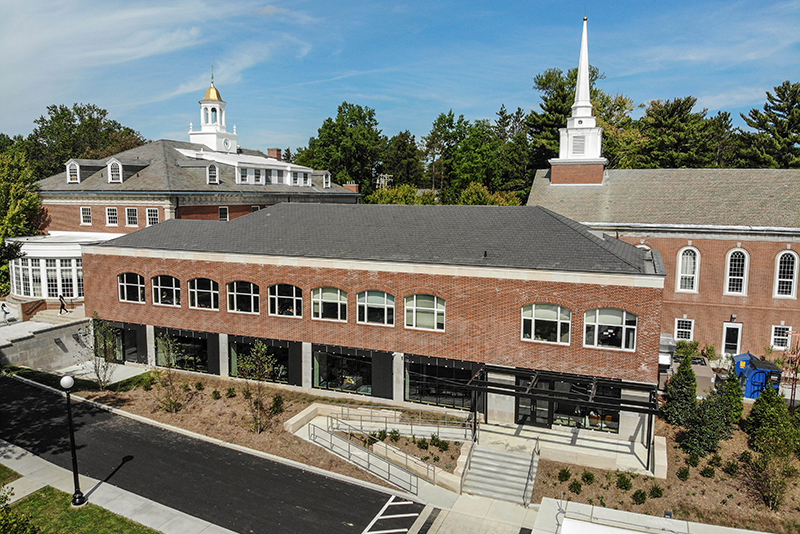 The 12,000-square-foot space is located on the lower level of Rowe and Memorial Halls on the school's 130-acre campus in Fox Chapel, which serves approximately 450 students in grades 9-12.

The new facility includes three primary areas: the Fabrication and Robotics Wing, the Computer Science Wing and the SSA Café. 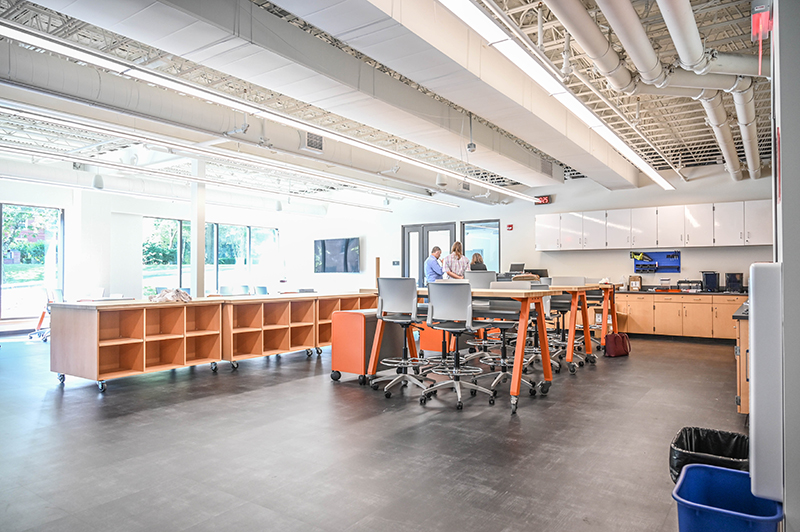 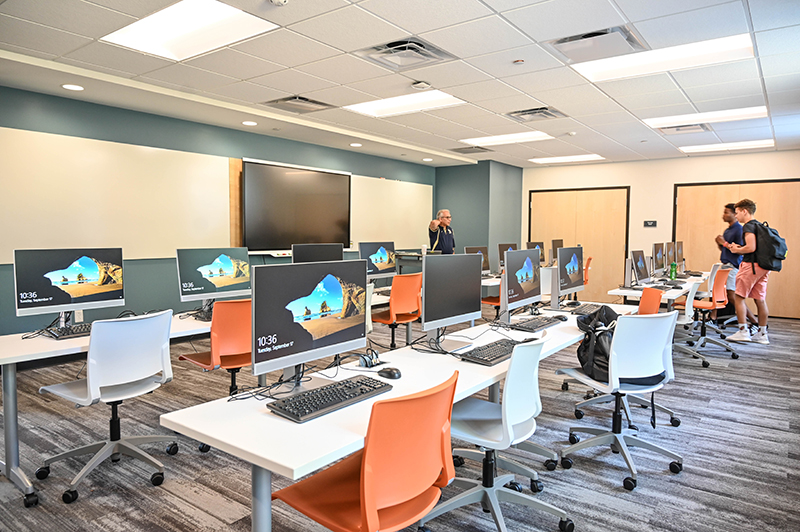 The Computer Science Wing is home to the Senior School's Computer Science Department, which moved from Hunt Hall. It houses two spacious computer classrooms, each of which is equipped with 16 HP Elite One computers and a 72-inch interactive SMART Board; a faculty office; and a computer lounge equipped with five computers, two 48-inch SMART Boards and tables for students to work on group projects, meet with teachers or study. The Senior School computer science curriculum offers a required foundational course in problem-solving, as well as advanced electives in subjects such as game design, mobile app development, artificial intelligence, robotics, 3D modeling, computer architecture and more. 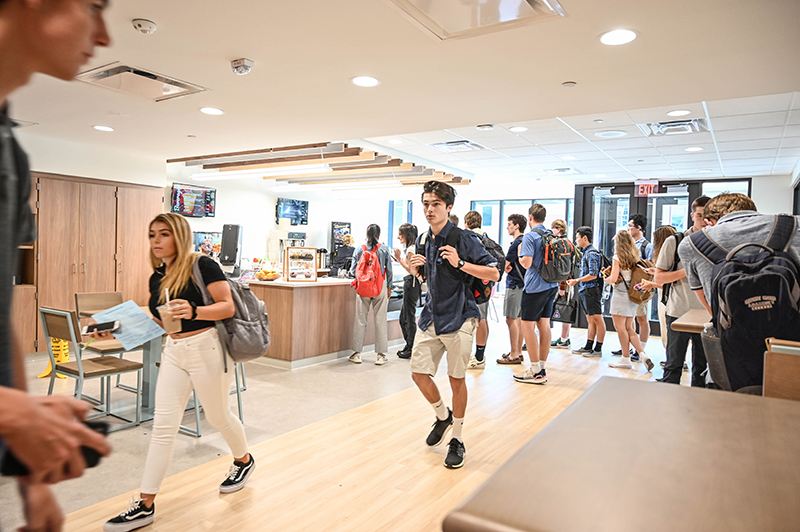 The SSA Café is a community gathering space located between the two wings, directly inside the new exterior entrance to the Glimcher Tech & Design Hub. The café offers coffee, tea, smoothies and grab-n-go snacks on school days from 7:30 a.m. to 1:30 p.m., and is already a popular hangout spot. Large glass windows allow students sitting in the café to see what's happening in the robotics arena and fab lab.

Jesse Robinson, who joined SSA in August as the director of the new Glimcher Tech & Design Hub, is spearheading efforts to integrate the new facilities and project-based learning across the curriculum. He's begun hosting a "Maker Monday" professional development series for faculty and is partnering with teachers on class projects, such as building solar-powered cars in physics class and creating laser-cut German Christmas pyramids in German class. He's begun working with students on independent study projects, including a student who plans to build a "living wall" of plants in the fab lab that uses automated technology to monitor soil moisture and sunlight. He's also reaching out to universities and businesses to forge partnerships on projects and programs to further benefit teachers and students.

"Learning by doing and project-based learning are so important. You see levels of engagement from students go up as they start tinkering and making things, and there's a bigger connection between the student and the work," said Robinson. "The Glimcher Tech & Design Hub really hits all of those targets – creativity, innovation, problem-solving – that give students the skills to be successful in an ever-changing world."

"The Glimcher Tech & Design Hub is going to bring the Senior School to a whole new level of creativity and innovation," said Senior School Head Sophie Lau. "At Shady Side we have always thought of ourselves as problem-solvers, and we teach critical thinking and problem-based learning throughout our curriculum – whether it's in math or computer science or English or history. Our hope is that the learning opportunities this new space provides will continue to build our students' capacity to take on real-world challenges and solve real-world problems."

"This is a game-changing space for Shady Side," said SSA President Bart Griffith. "I can't wait to see the creativity it inspires and the potential it unleashes in our students. Together, the Glimcher Tech & Design Hub and the McIlroy Center for Science and Innovation give Shady Side some of the most distinctive high school STEM facilities in the region, which will prepare our students to lead and serve in an increasingly creative economy."

Construction on the Glimcher Tech & Design Hub began in June 2018, when the Science Department vacated the space for the newly constructed McIlroy Center for Science and Innovation. Work was completed in September 2019, with the new spaces opening gradually over the first few weeks of the school year. Strada was the project architect, and SSA Facilities Director Paul Francioni was construction manager. In keeping with the Academy's commitment to sustainability, the facility features energy-efficient features such as LED lighting with occupancy sensors, a daylight harvesting system and water-saving plumbing fixtures. Environmentally responsible construction materials were used where possible.

The physical transformation of the space is remarkable. What was once a dimly-lit basement housing a 1970s science lab and classrooms is now a bright and airy space with modern technology. As part of the construction, the surrounding land was regraded to reveal walls that had been mostly underground, allowing for floor-to-ceiling windows and a new exterior entrance that flood the space with natural light.

The Glimcher Tech & Design Hub, a $2.9 million capital project, is the final phase of The Campaign for Shady Side's initiative to expand and upgrade SSA's science and technology facilities. The first phase was the renovation and expansion of the Junior and Middle School science labs in 2014-2016, and the second phase was the construction of the Senior School's McIlroy Center for Science and Innovation, which opened in 2018.

The Glimcher Tech & Design Hub is named in memory of Nona Glimcher, mother of SSA trustee, parent and donor Robert Glimcher. Donors to the project include the SSA Parents' Association, which supported and named the SSA Café, and the Class of 2019, whose class gift supported the CREATE art installation. Naming opportunities are still available for spaces, equipment and faculty initiatives in the Glimcher Tech & Design Hub.

To date, The Campaign for Shady Side has raised more than $30 million for science and technology facilities, endowment and the annual fund, thanks to the support of many generous donors. Fundraising is ongoing for endowment funds for both the Glimcher and McIlroy facilities, to support maintenance and upkeep costs in perpetuity. For more information, contact Director of Alumni & Development Dr. Allison Saras at asaras@shadysideacademy.org or 412-968-3077.

View a photo tour of the Glimcher Tech & Design Hub::