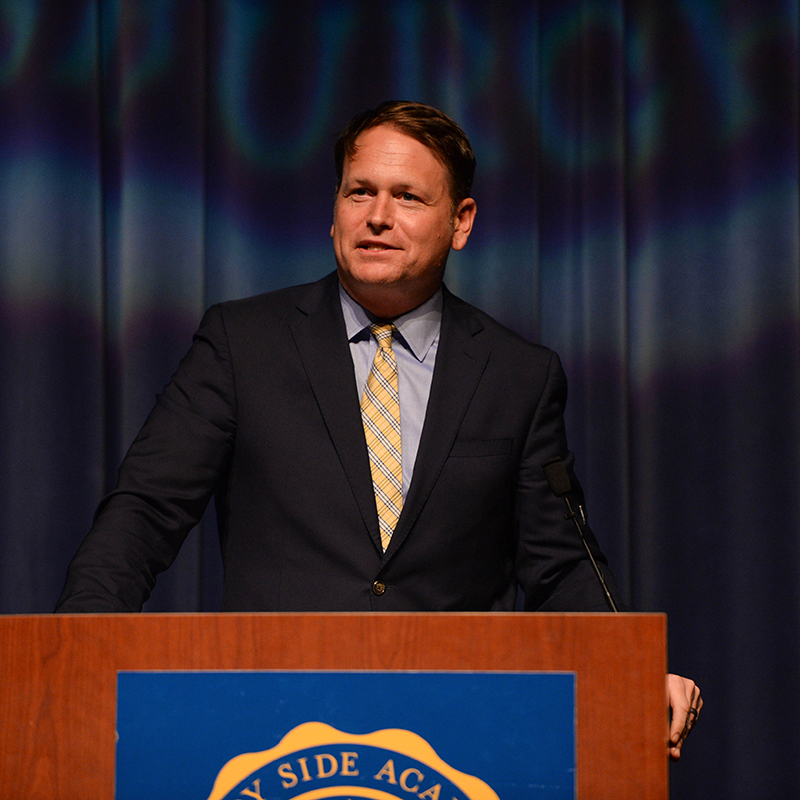 Shady Side Academy officially installed alumnus Bartley P. Griffith Jr. '93 as president in a formal ceremony Thursday, Oct. 10, 2019, at the Hillman Center for Performing Arts on the Senior School campus.

More than 500 members of the SSA community attended the ceremony in Richard E. Rauh Theater, which opened with a musical performance of Here Comes the Sun by the SSA Jazz Combo. Rev. Tom Johnson '73 gave the invocation, and Board of Trustees Chair Jon Kamin '91 welcomed guests. Senior School teacher Sue Whitney gave remarks on behalf of the faculty, and Gilman School Headmaster Henry Smyth, under whom Griffith worked prior to at SSA, read a poem.

Then, students from SSA's four campuses presented Griffith with gifts. Country Day School fifth grader Ellie Laman and third grader Giovani Diaz gave him a compass to help guide him on his journey as president. Junior School fifth graders Julian Brown and Breslyn Plesh Stock-Bratina gave him a framed photo of the Junior School community and an honorary "Doctorate in Fun" degree for being such a fun president. Eighth graders Caroline McLaughlin and Kamal Elsayed presented him with wristbands and a framed copy of the Middle School motto, "What You Do Matters," to help him remember those important words. Senior School 12th graders Daniel Xu and Molly Skvorak gave him an image of Rowe Hall etched into wood using the laser cutter in the new Glimcher Tech & Design Hub, and a photo mosaic featuring images of Senior School students, in recognition of his respect for the past, his interest in the students and his vision for the future.

The Senior School Chamber Choir performed In My Life by The Beatles, one of Griffith's favorite bands. Griffith's wife, Danica, introduced Rev. Dr. Bill Clarkson, former president of The Westminster Schools in Atlanta, who gave the installation address. Clarkson hired Bart and Danica as faculty members at Westminster, where they met, and he later officiated their wedding.

Kamin gave the investiture and charge to Griffith as president, who accepted "with a full heart," saying "I am all in, Shady Side." He thanked program participants, his predecessors (including former SSA presidents Emerson Johnson and Peter Kountz in attendance), the administration, faculty, staff, students, civic leaders and his family. Reflecting on SSA's tradition of asking bold questions, he closed by saying "As your president, I promise we will continue asking big, audacious questions together. I promise we will lead in a world that desperately needs leadership. And, most importantly, I promise we will take good care of one another, loving both our school and its people with all our might." Read Bart Griffith's full acceptance speech here.

Kountz gave the benediction, and guests joined in singing the alma mater to conclude the ceremony. A reception immediately followed the ceremony on the Mary Hillman Jennings Plaza.

View videos and photos of the ceremony below:

A gift of Support